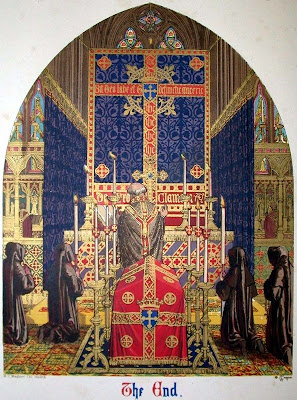 I am going to ascend the altar in a few minutes to celebrate my third Mass for today. Today All Souls Day, and Christmas Day, the Church positively encourages, rather than discourages priests to trinate.

The first Mass was simple just with the Ordinary (Kyrie etc) sung. Tonight's Mass has been organised by some of the younger people in the Parish and has the Latin Propers. The middle Mass, I celebrated was private, just me and a server, I offered it in the Extraordinary Form, the first time I have actually done so. It took me an hour to celebrate Low Mass, slowly reading the text and rubrics. I don't know if at public Mass I might have disedified people, I got a bit mixed up with the ablutions, I think maybe not.
It is strange how comfortable it felt, like tool that just fits the hand. It was an incredibly prayerful experience. I offered it for my own deceased relatives, principally my mother who first received the Lord at this Mass, her parents, and all those ancestors who would have been buried with these words. I felt a strange union with those priests of ages past whose mouths uttered the same words, whose hands made the same gestures. At the back of my mind was the commandment, "Honour your father and mother, and you will live long in the land". It makes me sound like a wet liberal but "it felt right".
at November 03, 2008

Very interesting Father. I agree with your sentiments about priests celebrating three Masses on All Souls Day. I'm sure you do it very reverently but I was just thinking about my experience in Ireland when I was growing up(and not so long ago). Many parishes would have three Masses said in sucession by each priest without leaving the sanctuary. I seem to remember it usually took this form although I can't remember the exact details as it all happened rather fast and mostly rushed:
The first and third mass had the readings incl gospel(read by a reader at the first and the priest himself at the third - no readings at second mass). The introductory rites were said only at the first mass and communion distributed to the congregation only at the last. The first and second mass did not have a blessing of dismissal, after reading the post communion the priest just started on the next mass. However, I remember that when All Souls fell on a Sunday (probably some time in the 1990s) there was a collection at all three masses, lol!
I'm sure it was of those perculiarly Irish devotions left over from pre-vatican II times (I've never heard of it since moving to the UK). I think probably it is one of those traditions left unrevived although it was always very popular with the devout and those who could use the opportunity to go to the very quick second mass (lasting around 12-15 mins max). Like many (most?) parishes in Ireland sadly there was never any music at any masses (ever)- except for the Tantem Ergo during Benediction. We had 3 priests in our parish and all three did this seperately - it was the busiest morning of the year.

"It makes me sound like a wet liberal but "it felt right". "

That was my sentiments at my first TLM as a layman to Father :)

Well, this is momentous news, indeed, and many thanks to Fr. Ray for generously sharing his thoughts.

As a layman I can only imagine what an experience it must be for a priest to celebrate the "old" Mass. I can only speak of my own experience when attending the old Mass. It is sublime. One is irresistibly drawn into the sacred action. The prayers are rich, meditative and powerful. The silence and stillness is truly sacred. The saints and the souls who have gone before us, who knew this Mass before we did, seem very near.

The sense of continuity with the Church's great liturgical heritage is almost tangible. Nothing of importance has been ommitted, forgotten or jettisoned.

This is the Mass I learned to follow as a child, the Mass of my First Communion, my Confirmation, of my youth, my adult years, the Mass of the old great feasts and fasts, and of everyday worship, year after year, an awe inspiring experience which never palls. Is this nostalgia ? No, it is not. I am not hankering after the past. This is the very same form of Mass which I, middle aged now, attend to this day.

Oh, its light might seem to have been dimmed these past years, but it was never extinguished. And now the same light, here and there, burns brightly again. It will never be blown out.

Not for nothing is it called the Mass of ages.

I was moved by your description of your first Mass in the Extraordinary Form. I shall remember you in my prayers tonight.

Lovely post. Ritual is quite a comfort. So is the use of exact things that previous generations have used. For instance, china isn't just for looking at, but it's nice to actually use it and bring back many happy memories of a continuity of generations. I don't make bread very often, but when I do I use a mixing bowl my grandmother us. I even have an old square throw pillow of hers, of an ugly green and orange pattern I can remember from my earliest days. Many of us grandchildren lived far from her, and when we'd visit we all must have had a turn at that couch for our bed. I was lucky enough to live with her for a short 5 months or so with my mom and dad when I was 5. I've only to look at that pillow to get the "blue blankie" effect.

It's the same way with the articles we use at Mass. I see the beat up thruible, and know it's probably older than I am - it had been there for a number of years when I first started going to Mass there, ditto many of the chalices and ciboriums.
I can remember being shown how to lay out a chasuble before Mass when I was in my teens, and many is the time, I've shown others how it's done. It makes you feel part of the whole. I smile when I see those mosaics in very old churches - certainly not fiddlebacks, but the kind now favored. I smile because I can recognized a priest of the 4th century at Mass looks not unlike one today. There is comfort in that - a sense of belonging.

Better a Mass that is said patiently, reverently, rather than one that's rushed...I'm sure that if I was there I wouldn't mind Mass taking a bit longer :)

What a wonderful first EF mass to celebrate. I'm sure any congregation members wouldn't be disedified even if there were a few fluffs, and having watched a few priests learning to say the EF, it does get faster pretty quickly (although actually I always find it a bit sad when they do speed up!)!

Congrats on your first Tridentine Mass. Please let us know the next time you say it as we'd love to pop down and participate.

Fr, is that artwork related to your church in Brighton? the stain glass window depicted at the top of the print looks familiar.

Ma Tucker, It is the endpiece of one of AW Pugin's books, can't remember which.

Wonderful news Father and I am not ashamed to say that your comments have moved me to tears on reading them.

A few weeks ago a Priest told me he thought you were 'ready' to celebrate the Mass of Ages. Please let us know when we may attend.

Well done, Father, well done! You described the experience beautifully. Your confidence will certainly grow. May your offering of the Older Form always be a source of joy and fruitfulness, both for you and for your parish.

Well done, Father! As a priest who began to say the Old Mass many years ago, I assure you that it will bear great fruit in your personal life of prayer and also in your ministry. You do right to start slowly, but surely, and then build up speed with time. I find it hard to say low Mass in less that 25 minutes; usually it is a full half hour.

Very glad for you Father. I met a priest last week who has been saying the older form of Mass for a number of years and he said how the enrichment in his spiritual life was not a one off but increased and deepened continually as he became more familiar and over the years, in a way he could not even have imagined before he began. Gos bless you.

Interesting post, to hear first-hand from a priest when he celebrates the EF.

I was surprised at the LACK of comfort I had as a laywoman at the first EF I'd been to since I was in grade school. I thought I would be caught up in a combination wave of reverence and nostalgia, and I wasn't. I kept losing my place, ha to peer and compare to the missal to see where the priest was. I am so used to the rhythm of the NO, whether I'm prayerfully concentrating or being a little distracted, my heartbeat sort of accomodates to it. Overall, I felt like it just limped along, even though it was said beautifully, with good chanting and reverent servers.

It's important, and it's very unifying to celebrate the EF with the Church through history, and I'll sincerely try it again, but nobody should assume that it will be love at first sight.

therese z, Give it a few more tries, get comfortable, and you will never want to go back to the new way. It's so bland and noisy in comparison.

Sadly, in our Parish a hundred plus miles north of you, we had no Mass at all on All Souls day.

May be of interest to you Father!