So teaching: a Prince of the Church 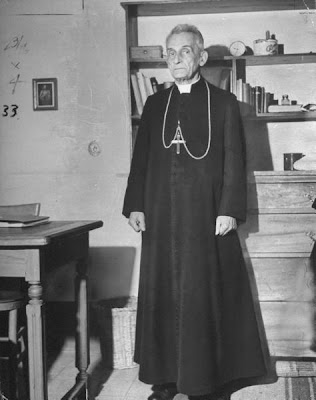 I'm afraid I cannot look at (Prince) Cardinal Adam Sapieha's picture with much affection.
The 4 October edition of the Tablet carried an article about Pope Pius XII by the respected historian, Professor Yehuda Bauer in which he wrote:

"Archbishop Adam Stepan Sapieha of Krakow literally turned his head as Jews pleaded with him to raise his voice as Krakow Jews were being deported and murdered."

Slander against Cardinal Sapieha
In the summer of 2006, the book entitled ‘Fear’ by Jan Tomasz Gross was published in the U.S.A.

The slander against Cardinal Sapieha, Metropolitan of Krakow, one of the greatest figures of the Catholic Church in Poland in the 20th century, spread in Gross’s book, is especially base. On page 206 of the Polish edition of ‘Fear’ we read the opinion concerning Cardinal Sapieha, which Gross quoted, ‘Cardinal appeared to be an evil man, merciless man ... And he was an anti-Semite.’ On page 314 of the Polish edition Gross ‘creatively’ supplemented his slanders against Cardinal Sapieha, included in the English edition, ‘Even Cardinal Adam Sapieha, whose attitude towards the occupant authorities was praised after the war, did not lodge any protest against the Nazi action of murdering the Jews with Governor Frank. Neither his statements nor the statements of other hierarchs of the Polish Church – recollects Fr Stanislaw Musiol in the interview that was published just after his death – have any traces of compassion or concern. This is horrifying.’
One finds no justification to refer to Fr Musiol’s opinion. The late Fr Musiol did not have any deep knowledge about the history of the Polish-Jewish relationships. But he was known for his bias texts, contrary to the stand of the Church concerning the relationships between Christians and Jews. Furthermore, the Primate of Poland Cardinal Jozef Glemp called him a representative of the Jewish option and the Jesuit Society sent him a letter containing the command ‘not to speak about the matter of the Oswiecim crosses and similar topics.’ Cardinal Sapieha of Krakow, whom Gross accused of being an Anti-Semite and who did not show ‘any traces of compassion or concern for Jews’ in accordance with the words of Fr Musiol and Gross, was actually the main organiser of the secret help offered for the Jews living in the region of Malopolska during the war. Jerzy Slaski wrote about the significance of the help for the Jews given by the Metropolitan of Krakow, ‘Cardinal Adam Sapieha of Krakow, who many a time appealed to Frank to stop terror against the Jewish population, was a model for the clergy in this respect (help for the Jews). When his appeals failed he personally directed the rescue action. He provided birth certificates to the Jews, asking his diocesan priests to do that. He opened the gates of religious orders for them. He placed Jewish children in boarding schools and orphanages run by religious congregations. The main helper of the Archbishop was Fr Dr Franciszek Machay from the Blessed Sacrament Church in Krakow-Zwierzyniec, a known social activist and preacher.’
In his book entitled ‘Zaglada Zydow w Krakowie’ [The Holocaust of Jews in Krakow], (Krakow 1985, p. 38) Aleksander Biberstein, a Jewish physician and director of the Jewish isolation hospital in the Krakow’s ghetto, wrote about the interventions of Cardinal Adam Sapieha with the German authorities in 1940. Unfortunately, the only reaction to that intervention, as Biberstein writes (op.cit, p. 223), was the imprisonment of three rabbis who dared to ask the Cardinal’s help and their transport to Auschwitz.’ As we can see, in spite of Gross’s lies, Archbishop Adam Sapieha intervened with the Governor General Frank as early as in 1940. His attempts failed. On the contrary, the appeals caused the criminal German retorsion against the Jews. Would any further attempts make any sense? Cardinal Sapieha focused on the most effective activities: to organise on a wide scale help for the Jews in his archbishopric, the help that was very much appreciated and exposed by authentic historians and not by jealous men and impostors like Gross. In his latest work published in the book entitled ‘Wokol pogromu kieleckiego’ [Around the Pogrom in Kielce] Prof. Jan Zaryn, a historian working in the Institute of National Remembrance and the most outstanding expert in the history of the Catholic Church during the war, wrote about the great merits of Archbishop Sapieha in organising the dangerous actions of rescuing the Jews, ‘The Archbishop of Krakow, in spite of the German ban, let his priests baptise Jews and falsify their certificates as well as he personally intervened in the cases of the Jewish Catholics.’

The Tablet (or suppository as it should be known) is known for it's horrendously inaccurate and biased portrayal of the Catholic church and what she did in World War II.

And Professor Yehuda Bauer can hardly be an accurate source of information on the Holocaust. If he believes that the Holocaust is the most criminal genocide in the world, without taking into account how many Russians were slaughtered by Stalin himself, then he doesn't deserve the time of day.

In terms of numbers, the communist dictators took more lives than anyone else. Fact.

The difference between Hitler and Stalin etc, is that Hitler sought to destroy a people because of their racial origins, that is the horror of the Nazi persecution.

I would not trust a single word of Gross, known as a confabulator. He makes all horrible stories in his ill mind. He himself, has been saved by Poles, now he turns his back on them.