Wet liberal that I am... 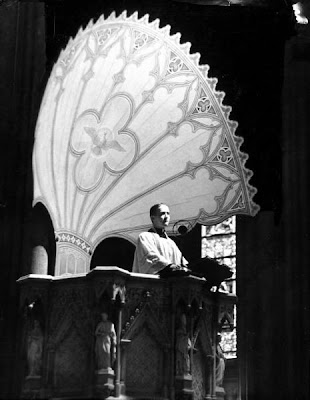 Wet liberal that I am, I am a little confused by the enforcement of morality. Abortion is the greatest moral evil of our age. Divorce and remarriage is pretty ghastly too, civil partnerships are pretty damaging to marriage, fornication does not do it much good either.
As a wet liberal what do I do about it? I can rage about it in the pulpit, I can repeat the Church's teaching and refer to the Gospel, talk about how it damages society. I must admit I was a little shocked by some US clergy who were reported to ban Obhama voters from Holy Communion. The more nuanced reports of course were saying, "if you voted for him because he was pro-abortion".

Most of the women who have spoken to me about having had an abortion do so because they were so terrified, often after rape. Divorce and remarriage are so much part of the warp and weft of society, and again often the marriages that fail are built on foundations of sand, and are possibly capable of annulment. One or two of my parishioners have undertaken a civil partnership, and when I have stated my displeasure they assure me the relationship is one of companionship, inheritance and care in old age rather than genital activity. Fornication doesn't seem to be a serious issue for most of the graduates of our Secondary Schools, the vast majority of those who I have married in this parish were living at the same address, it could be only the dirty minded might imagine a premarital sexual relationship.

What do I do, what does the Church do?

The penance in the Orthodox Diocese of Athens for an abortion is a 7 years bar from Holy Communion, this is the canonical penance, and the confessor would also apply a salutary penance like fasting for an extended time, or some daily corporal penance.
Other Orthodox Churches would apply a penance of a year or a few months away from communion for fornication or homosexual acts.

Obviously we wouldn't want to apply this type of regime in the Latin Church, though I cannot think it fair to leave people confused as they obviously are.
Posted by Fr Ray Blake

The East has always seemed much stricter about their penances...I believe the confusion of the Faithful can be solved by one simple thing. Enforcing the Laws that are actually on the books.

I don't presume to advise - only to pass on information. The problem comes down, in my experience, to the fact that no child is taught that to receive communion, one should be in a state of grace. I can assure you that fasting for an hour before communion; the necessity of confession for serious sins; honouring the obligation to attend Mass EVERY Sunday - these are simply ignored or fudged in school and parish catechesis. I have a 10 year old and a 13 year old, whom I entrusted to a top-rated state Catholic primary school.None of my son's classmates could explain Transubstantiation (the concept, or the word) on the day of their First Communion. Now, it may well be a different story in Brighton. You will know if this happy state of affairs exists by the long queues for Confession, and the nature of the sins confessed therein. I think, as a sinner myself, a distinction exists between being welcomed to Mass - but also being taught the necessity for Communion to be received only in accordance with the Church's requirements - which have not changed except in the minds of the modernists.

Father,
What is a 'wet liberal'?

"Canonical" penance means precisely that - a "rule" in the sense of a "straight edge" or measure; not in the sense of an inflexible, immutable law. There is no "one size fits all" - no generality - in Orthodoxy. The canons are always applied to particular souls, in particular circumstances.

Orthodoxy has many rules on the books which are simply ignored by the people who attend church on big feast days. Membership of the Greek Orthodox Church is more cultural than religious.The orthodox are great on outward show.

Most of the priests turn a blind eye to the fact that most if not all of the brides have had sexual relations with the prospective grooms and are contracepting.

It's always a mistake to make judgments about the quality of other people's faith and observance. Besides, everything you've written could have been lifted verbatim from an Evangelical site, with the word "Orthodox" substituted for "Catholic". Pot-kettle.

"I don't believe a word of this stuff, but I still hate Rangers"

You might be right Moretben, another definition of "canonical" is "that which is listed" which is how we normally apply it in the West.
Not sure about your familiarity with the Orthodox Church in Greece but there is a remarkable consistency in the penance imposed on mothers who have abortions, personally I only know of the Athens diocese, but as you say there is not consistency, and certainly not in the area of adultery, even less so in that of contraception.

So what should a wet liberal do? Just keep preaching the Truth. For those who will hear it and accept it it is a sure path, for those rebelling it will be a beacon when their search for home begins.

Just a note-- I don't think any priest in America has refused Communion to Obama voters. There was a big flap about the situation described here: http://wdtprs.com/blog/2008/11/a-good-view-of-the-greenville-controversy/ But that priest denied no one Communion. The controversy came when the Associated Press did its usual stellar job and distorted the truth (in their headline, no less!)

"Another term which is often used incorrectly today is "canon". this term simply means a guideline, rule or straight line by which one can determine the straightness of other lines. It is, therefore, something appealed to as a criterion to determine the correctness or accuracy of whatever is being assessed. In modern times (since 1768) the term has acquired a second meaning, that of "list", in particular the list of authoritative books. But in antiquity, the term was not used in this way, and indeed it could not have been. When today, "the canon of scripture" is spoken of, there is a sleight of hand at work: on the one hand, the expression refers to the list of books contained in scripture, but on the other hand, by speaking of this list as a "canon", a regulative function is attributed to it. There have, therefore, been innumerable studies in recent centuries, attempting to determine precisely which books came to be counted as scripture in different places and at different times. Such works will usually note that the word "canon" primarily meant "rule" yet presuppose that it is the "list" that is most important, and then devote their attention to such "lists" while ignoring what early Christians in fact said about the "canon" or "rule".

In fact, there was remarkably little concern in antiquity to catalogue the authentic or genuine books of scripture..."

BTW I lived for three years in Athens, but not as an Orthodox - so I can't claim any familiarity with penitential norms!

It's always a mistake to make judgments about the quality of other people's faith and observance.

Morbethan, my post was in response to Fr Blake’s
The penance in the Orthodox Diocese of Athens for an abortion is a 7 years bar from Holy Communion, this is the canonical penance, and the confessor would also apply a salutary penance like fasting for an extended time, or some daily corporal penance.
Other Orthodox Churches would apply a penance of a year or a few months away from communion for fornication or homosexual acts.

I come from a Greek Orthodox family originally from Athens and now some live in Australia and am speaking from that which I know. It’s always a mistake to make judgements about people’s posts when one does not know the background of the poster. Yes I realise that Catholic or Anglican could be substituted for GO but that does not make what I said untrue.

Re your comment re abortion in Athens father. Abortion is plan B when contraception fails. The penances etc may be on the books and that is where they stay. Often of course the priest doesn't know that woman has had an abortion and so cannot apply a penance.

Sorry, Victoria, I don't follow you; why would knowing or not knowing your background make any difference to the principle? It's a sin to make judgements about the quality of other people's faith and observance, regardless of what you think you know about it, on whatever grounds. Full stop.

...on the other hand, I do have a "Greek" story (it could just as easily be a "Jewish" story) which I hope will make Victoria smile:
A few months ago, on a Great Feast, I was chatting with a Cypriot guy I hadn't seen before, after Divine Liturgy.
"You're not Greek" he says, "what brings you here?"
I explained, somewhat earnestly.
"Ah..." he shrugged. "Religious reasons. You're not marrying somebody..."

What can the Church do? On abortion, she can offer truth and compassion, which she does already. Other than that she should lick the pro-life movement into shape. At the moment it has virtually no influence on British politics whatsoever. Pro Life groups tend to be reactive, not proactive. They don't do any recruiting that I can see and they certainly don't recruit outside their religious base.
If the Church really was ambitious for Pro Life it would take a good look at the recent HFE Bill and abortion time limit reduction campaigns with a view to learning from their mistakes and it must be said they made quite a few.

On divorce and "remarriage", let me suggest that we stop sanitising these things. Why do we refer to "remarriage" and not adultery, or at least put the word "remarriage" in inverted commas, as I have just done?

We should also argue vigorously with those who advocate admitting "remarried" divorcees to Communion. The question must be put to them in bald terms: if a married man or woman is having an extramarital affair should s/he be admitted to Communion? What's the difference?

And who knows, one long distant day in the future, maybe we campaign for progressive family law reforms such as abolishing the disgrace of forced divorce, that is requiring the free consent of both parties for a divorce.

Incidentally, some people wonder why cohabitation is so popular among young people. Part of the answer is very obvious: easy and unjust divorce laws. Young people, especially women, reason that there is no point in getting married if the marriage can be dissolved on the say so of one party. Those in the Church who effectively argue for adultery to be downgraded from its status as a mortal sin further disincentivise those considering marriage.

Why should ordinary people respect marriage if church and state don't?