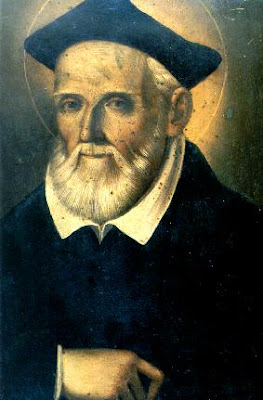 I thought you might enjoy this, I found it Holy Whapping, it is about the only saint I know who wrote a joke book. He used to get aristocratic young men to carry an aging, smelly dog around with them. When he met St Ignatius in the street whilst speaking of holy things would twist his cassock buttons off.
In many ways he is bit like a 20th century surrealist. He was regarded by those of his own century as the second Apostle to Rome, young men flocked to him. When the Pope was in a rage he was the only man who would dare to calm him. When heretics were taken to be burnt he embraced them. When his young men were tormented by their sexuality he calmed them.

"His extravagant behavior cannot be passed over without some explanation. Why, for example, when certain Polish noblemen came to visit him at the Vallicella [the church adjoining the present-day Roman Oratory], seeking edification, did he have read aloud the most ridiculous passages from Pastor Arlotto saying that it was his spiritual reading? Why, when invited to the house of one of his penitents, a rich Roman lady who had invited him to meet her worldly relatives, did he arrive with half his beard shaved off? Why, when some scholarly Bishop, little given to jesting, attended his Mass, did he commit every possible error in pronunciation? Why did he sometimes wear a red jersey or a fur coat over his cassock? Why did he walk through the streets carrying a bouquet of flowers in his hand, or perform a burlesque dance before an audience of Cardinals chanting comic verses which he made up as he went along?

"Was it merely to make a fool of himself and cause others to think little of him? His buffonery cannot be so simply explained, for we must take into consideration the pranks he was constantly playing on others. These pranks took many forms; some were merely unexpected and ludicrous, as when he pulled the impressive beard of a Swiss Guard, others were more elaborate, as when he sent Baronius to a wineshop to sample all the wines before buying half a bottle; to make it all the worse he had to offer a gold piece in payment and ask for change. Then there was the somewhat scandalous prank he used to play on people who came to him for miraculous cures. He would give them a small sachet which they were to place on the affected part, with the proviso that they must on no account open it. As soon as he died the recipients could restrain their curiosity no longer. On opening up their sachets they found that they contained nothing more than a cheap holy medal!

Who was he? St Philip Neri of course.
He actually managed to make "humiliations" and the spiritual life fun, the same message as St Ignatius' contra agere, but without the military tone.
read more here from THE ROMAN SOCRATES [ST. PHILIP NERI] Louis Bouyer
at November 14, 2008

My favourite story of "Pippo Buono" is how he once noticed an overly-religious man who would stay for hours on end in the Chiesa Nuova. One day St. Philip grabbed him by the collar and threw him out - exhorting him to become a nurse and puts his talents to better use!

I think I also remember hearing that St. Pio would purposely pick his nose, in front of devotees, so that they would think he is mad.

Besides "smelly" any idea what kind of dog? :-D [Dogs RULE!!! Even smelly ones. They pull people from burning buildings, something which no cat has ever done. :-D hi-Mac!]

Bit like Brother Pious at my school,he actually put me in th choir

A spaniel [My FAVORITE kind of doggie!!!] *sigh* They really don't smell unless you don't "Brushy-brushy" them...which they *love.* I can see why the fops would carry them though, no matter how smelly. Those dogs always smile. And who can resist anyone carrying a smiling dog?

My favourite St PN story is what he did when he noticed that some aristocratic woman was in the habit of leaving church after Mass without making a thanksgiving after Communion, in spite of his entreaties on the subject (I think). So, one day as she left, St PN sent his acoltyes with lighted candles to accompany her, on the grounds that the Blessed Sacrament was still present.