A Day with the Architect 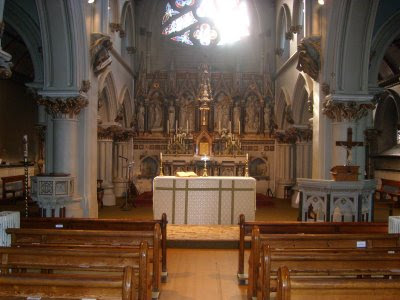 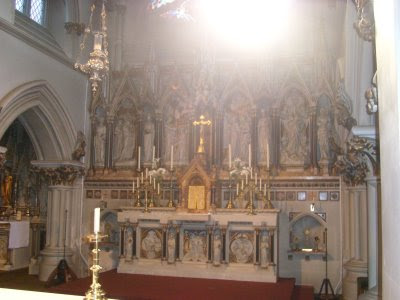 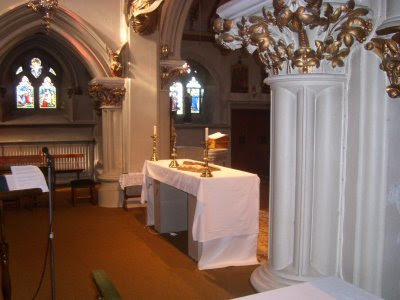 It has taken me a few yeas to find someone who will help restore, renovate rather than wreckovate our Church but I think I have found thew right person, Deidre Waddington, I have just spent most of the day with her.
The Church was "restored" in the 1970s, the altar was separated from the wall and placed on the original stone communion step, to save building foundations, the sanctuary was then extended into the nave by a couple of meters. 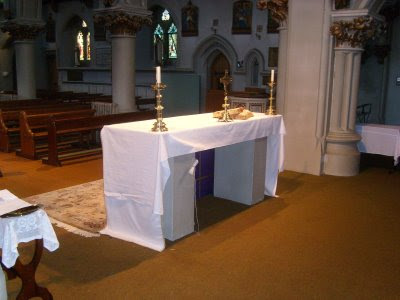 For the last forty years it has meant that we have had to move a couple of rows of benches, the same when couples get married. As the altar is just one step above the level of the people it has meant no-one has been able to see the action on the altar. 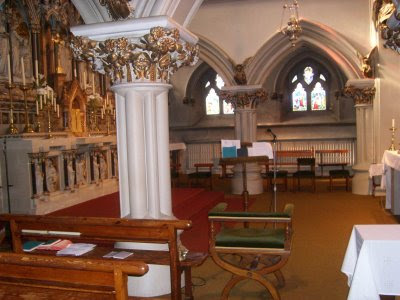 We want to move the altar further back between the two pillars on the sanctuary and extend the sanctuary steps. It would have been better had the old altar been left where it was but as it was altered it, now it has to be separated from the wall. Deidre has been trying to come up with a way that gives a unicity to the altar and reredos and utilises the original sculpture. If we bring the whole original altar front forward it will just be too big, fine against the wall, but not freestanding. 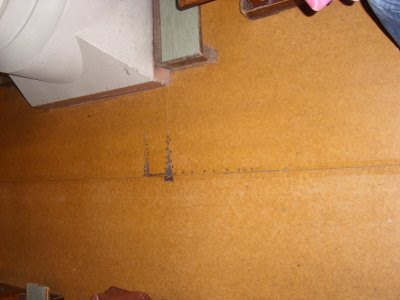 ether by tacks and parcel tape. 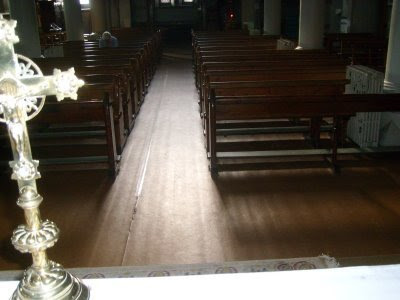 The lighting also needs serious attention, twenty years ago the lighting system was condemned and replaced by the present temporary system of floodlights and plastic conduit, when we need to replace a bulb "health and safety" says we have to hire a scaffolding tower.

Then there is the paint which is causing serious problems, it is that plastic stuff that used to be used in public lavatories. It is causing serious problems with the stone and plasterwork, it stops it breathing, so it just crumbles. It all has to be removed. The last picture is Church in the early 20th Century it shows the grime on the stone work, forty years after building, which will be impossible to remove. 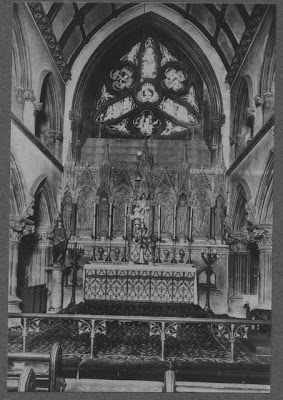 We can't afford any of it! But God is gracious and merciful in his Providence.

It would be a good idea to forget about being able to stand behind the altar. In a few years time nobody will want to say mass like that anyway.

I think they are a Dutch design.

Goodness, what a daunting task to face, and (as yet) without funds. Things could be done piecemeal, I suppose, but a restoration fund seems the best way to go. I will contribute.

I totally agree with Father and the architect about re-positioning the altar as a freestanding altar at the same height as the old high altar, and extending the footpace and altar steps. This would allow celebration versus populum or ad orientem. (At this point, I have to say Henry makes a valid point in his comment.)

It would restore the visibility of the altar. It would also visually unite the altar with the reredos. The whole thing would make more sense liturgically, and would give more space in the sanctuary. I would agree that what is left of Blount's old altar is better left as it is.

This would be a sensitive restoration in what is a historic building after the vandalism of the 1970s.

Has Father considered doing this work in phases :
1. The flooring
2. The altar
3. The paintwork, etc.

I hope and pray these plans become a reality.

Peter, Very kind of you, we will launch an appeal when we have drawings and the necessary permissions etc.

We want to do
the flooring in the nave and sanctuary, first.
Then the lighting, removal of the ghastly paint.
The stone work,
then decorating.
It might mean having a temporary altar for sometime.
At sometime in the future we shoul restore the stained glass, some of which is by Hardman's and is quite fine

Apparently on my latest blog posts about Eccleston square they help with liturgical changes. I'm not sure if they quite mean what you are thinking of though!

And can we please have our Altar rails back.

I also agree, altar rails would be nice. Kneeling on the floor can be a bit taxing...

'Altar rails would be nice' comments Joe. Not only nice but necessary I would add in order to receive Holy Communion kneeling. It is not actually the kneeling which is difficult for many of us - gravity gets us all down - but the getting up afterwards is the problem! With a rail to lean on we senior citizens would be able to rise as gracefully (well almost!) as the younger members of the congregation.

Yes pelerin, getting up is the hard part. For myself, as someone whose had knee operations, kneeling at the rail makes getting up much easier. :)...I'm glad no legalized vandalism will be going on at this parish :)...