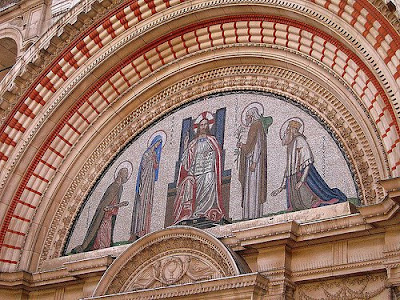 The Times has a bit on the Westminster succession, it is obviously important for the Church in England and Wales. I have even had a couple of journalist ring up to ask my opinion, I am not sure what value that is.
The latest rumour is a Scot, the Bishop of Paisley, the Right Rev Philip Tartaglia, former Rector of the Scots College in Rome. We have a Scot as Prime Minister, the former PM was one, more heavily diguised, it is slightly less likely than Australian, though I wouldn't put money on it, a bit too much like colonisation.

The reference in the article to "international experience" is important; remember the Ratzinger/Kaspar debate over emphasis on the universal versus local Church before the Pope's election. Ratzinger seems to have won that one. The Pope seems to look for a sense of the Universal nature of the Church in future Cardinals. I think the reference in the last few paragraphs are worth taking seriously.
at November 23, 2008

I checked out the website of the Diocese of Paisley, and was impressed by the simple, straightforward language used by the Bishop, in his talks, homilies, and the pdf files in the Liturgy section. He isn't afraid to stress the need for confession (sic) and to lay down rules for reception of the eucharist. I remember kissing Bishop Black's ring as a child,(I was baptised and received 1st cofession and communion in this diocese - and return to see my family (when not busy colonising London) and what I read makes me think his successor is a worthy and thoughtful bishop -conservative in the best possible way - and a person who is detached enough to offer a fresh approach should he be translated to E&W. He refers frequently to the Pope's teaching as the basis for his pronouncements, and is on record as being willing to accommodate the EF mass (although to my knowledge nowhere in Paisley offers it at present - but that is possibly down to the diffidence of individual priests, and may change with encouragement). Paisley has areas of spiritual and economic deprivation which parallel those in any major UK city, and the Bishop sees Catholic education as a key weapon in fighting these. I note he was elevated to Paisley by the current Pope. I recommend looking at the website. Compared with other diocesan websites, it speaks volumes about his priorities.

Whomoever Rome chooses as next Archbishop of Westminster (and there doesn't seem to be much choice of candidates, frankly), I wonder if the red hat is not sometimes awarded prematurely.

I realise Westminster is the senior see of England & Wales, and all previous incumbents have been created cardinals, but I am thinking it is a personal honour, too, and can be read as a mark of esteem.

After all, there is precedent, even in relatively recent times.

It's just a thought.

On the other hand, Bishop Tartaglia would be a great bishop to have here in England. My guess is, though, he's destined to replace Archbishop Conti of Glasgow on his retirement.

The criteria in the last paragraphs rules out all of them.

Previous Popes of inferior abilities to the present excellent pontiff appointed such outstanding men as Manning, Vaughan, and Heenan. The Pope knows what he is doing, we can pray and trust in him.

On the other hand the See of Westminster is sore in need of a priest of the diocese. As the Good God works in mysterious ways it would come as no surprise to many in the Archdiocese should the Holy Father appoint Father Terence Phipps to this illustrious office. He would prove to be our Lord’s arm as well as the Popes man.