And they SAW the Child 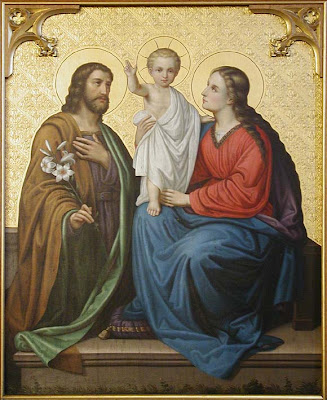 Christmas sermon notes
“The Angel of the Lord appeared to them and the Glory of the Lord shone around them. They were terrified,...”
The go to Bethlehem and they see the child,
they tell what they have been told about him
He is the Saviour, Christ the Lord, And they are told the child laying in a manger is a sign for them
Magi will come and see the same thing

WHAT DO THEY SEE?
A child, a mother, a man, we who are believers know the whole message, for us the curtain is lifted we know the child is God-man, the woman is a virgin, St Joseph is simply the foster. St Matthew and Luke have been at pains to point this out.
They would have seen a family like any other family.
The curtain is drawn apart, we see and they see with eyes of faith.
This is no Christmas Pantomime this is a life changing event
Christians are those who SEE

They are generous to the poor because they see Christ in them - in or city the Churches Catholic and protestant feed the poorest of the poor. Soup Runs run by Christians feed them- we feed them - our parishioners feed the hungry, our sisters started a The St Anne's Day Centre for the homeless, The Clock Tower Centre, a couple of hundred yards away from this Church for the homeless young people was started by and is run by Catholics. Because we see Christ in the poor. The Goverment leaves exiles destitute on the streets, the only organisation to care for them in Brighton is Voices in Exile, they of course operate out of my house, it is run by a Catholic, staffed for the most part by Christians.
Seeing the need to educate the poor has always been Catholic priority. A quarter of all schools in this country are "faith based", over three quarters of those are Catholic, because our forefathers saw the need to change lives by catechising the poor and the ignorant.
Caring organisation like CaFOD, Oxfam, Tearfund were all started by Christians, they saw the need to support those in the third world, and to come to the need of beset by disaster. 10% of the UK population is Catholic, a quarter, maybe less practicing, yet still CaFOD is one of the top UK aid organisations, because we see the need of our brothers and sisters across boarders. I can't see atheists or secularists with the same vision.
Aids: The Catholic Church is the largest provider of carer for those with HIVE/Aids, even in those places in South Africa where Catholics are in a minority and AIDS is more endemic.
Catholics care for Life, we campaign and work against the great evil of abortion and euthanasia because we see the holiness of life from the moment of conception in the womb until death and the tomb.
Caring professions - Practicing Catholics are more likely to be involved in the caring professions, as doctors, nurses, care assistants, because they see in the needs of the sick and elderly.
Hospice Movement was started by Catholic nuns, they saw the vision, others have take it up.
Catholic Marriages more solid, the family that prays together stays together, the children from a solid family are more likely to grow up morally and psychologically healthy.

As with the shepherds and the Magi they saw and their lives were changed, so with you who have come here with faith tonight, you see and your lives are changed, not just yours but the world is changed around you through your faith.
Our faith, our vision changes the world!
at December 26, 2008

Fr. Ray,
Who is the artist of this beautiful Holy Family art? How can I get an 8"x10" copy to be framed?

Fr Gary,
I am afraid I found it on Google images, so no help really.