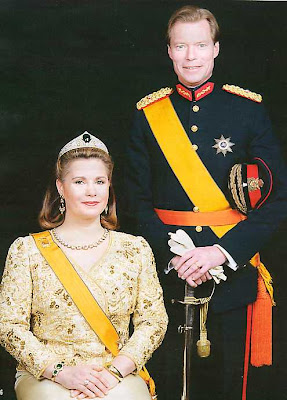 (CNA).- A petition drive has been launched to support Grand Duke Henry I of Luxembourg, who has imperiled his political powers by opposing a euthanasia legalization bill recently proposed in his country’s parliament.
Socialist and Green party lawmakers are backing the measure, which Henry I has said he will not approve for reasons of conscience. The overwhelmingly Catholic population of Luxembourg reportedly also opposes the proposal.
The duke’s action has triggered what some have called a "grave constitutional crisis" as the parliament moves to strip the duke of his constitutional power to sanction law.
The Paris-based Fondation de Service Politique has launched a petition drive for people to support the Duke’s resistance to the euthanasia law. It pledges to deliver petitions supporting the Grand Duke through Elizabeth Monfort, a former Minister of the European Parliament.
"With French members of the Parliament Jean-Marc Nesme, Marc Le Fur, Dominique Souchet, Véronique Besse and Bernard Depierre, let’s give our support for the Grand Duke of Luxembourg," the petition page states.
The petition is located here, don't forget to "validate" the email that will come.
at December 16, 2008

Thanks for the lead on this Father.
Good to be able to support something so wholesome emanating from my adopted country!

Thanks for the link Fr Ray, just signed. It's unfortunately all too rare these days to see people in positions of authority who not only have moral backbone and well formed conscience, but are consistent enough in their lives to stand up against the flow and opinions of others, for what they believe to be right.

Witness those 'mealy mouthed' politicians who vote pro-abortion and then go on to say 'but of course privately I don't agree with it' - sickening.

Well done Grand Duke Henry, while they might revile you on account of His name in this world, you will one day be welcomed 'home' amid 'joyous trumpets blast'.

A shame that the Duke is not the Monarch of this Country. Our anti-life government needs someone of Grand Stature to give them a run for their money!

A Holy and Happy Christmas to the Grand Duke and his family.

Remember how Sr Butiglione a distinguished scholar and friend of the Pope was barred from becoming Justice Commissioner by Green and Socialist MEPs objecting to his Catholic theology. They as atheists claimed the right to say what they regarded as sinful.

How does one sign the petition and send it? I followed the link you provided and have filled it but can do nothing further. I need some assistance. Thank you and God bless you.

Have a blessed Advent and Christmas.

Anne have you checked your emails? You have confirm the email sent to you.

Validation seems to come in the bulk/junk mail section. If only HRH The Queen had responded so with the HFE Bill. Now we know how Guy Fawkes felt when he thought, 'I'd kill for a Catholic Monarch right now'.

First time I tried to sign up I did not complete the section for the email address! This section is not asterisked so I ignored thinking not mandatory. But it is if you want your confirmatory email! Easy mistake if you're in a hurry (at least that's my defence!).

Could that be the answer? I tried again with email and it was fine.

It is good to see a nobleman who is also supportive of the church's liturgical patrimony, standing for God.

I support Grand DUKE HENRY, and I believe God does too. Those who are for such a horrid bill should be prepared to answer to God for their transgressions.
RPM
USA