I am Catholic, that is all 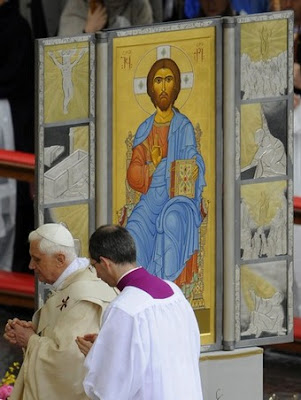 I hate being described as "traditional" or "conservative", I am Catholic, that is all.

I believe God the Father, Son and Holy Spirit with my whole being.
I believe in the Creeds of the Church.
I accept all of the twenty-one Ecumenical Councils, and ascent wholeheartedly to their doctrinal teaching.
I firmly believe in the ordinary and extraordinary magisterium of the Church; the extraordinary magisterium expressed in the Infallible teaching of the successors of Peter and ordinary magisterium expressed in the the teachings of the Councils and the Encyclical letters of the Popes, and the bishops of the Church, insofar as I have been given the grace to understand them.
My beliefs are the beliefs of mainstream Christianity, which is commonly called Catholicism.

There is nothing eccentric about my beliefs.

For example:
I do not believe God forgives us only when we have made a radical break with sin, but even when we have just a desire to break from sin, therefore I believe both in regular and frequent confession. God is not merely a God of the saved but of all who humbly seek him. This is a mainstream understand of God.
I find it incredibly difficult to believe in liturgy as being anthropocentric, it is "the work of the people", but it is theocentric and is about re-orientating us towards God. This is the timeless belief of both Eastern and Western Christianity.
I believe that we must make the kerygmatic proclamation of conversion and New Life, that is Salvation through Christ; anything else that detracts from this is deviant.
Though I accept many people have great difficulty with it, I do not believe the teaching on life and procreation found in Humanae Vitae is of marginal importance to society or men and women of today.

Accepting labels such as left or right, liberal or conservative are incredible damaging, we are for Christ, not Apollos or Cephas or Paul. There were always different ways of expressing faith. From the beginning there were Jewish and Gentile expressions of the one faith, later the Alexandrian and Antiochene schools but always one faith. Only one faith. The matrix for it, the Rock on which it was built, was the teaching of the Bishop of Rome. To be of one mind and heart with him is like the man who built his house on rock!

St Thomas of Canterbury would be proud of you. May he interecede for all of us secular priests entrusted to his patronage.

Can you explain what you mean by this paragraph:

"I find it incredibly difficult to believe that we must make the kerygmatic proclamation of conversion and New Life, that is Salvation through Christ, anything else is deviant."

Afraid I cannot understand it!

Thank you, Father Ray - you have expressed your belief and our belief so beautifully in this post.

"Accepting labels such as left or right, liberal or conservative are incredible damaging"

And also condemned by at least one Pope I believe. You are either Catholic or you are not, to be Catholic is to obey God who speaks through the Church with the Pope as her head.

Well said, Father. One can only pray that other shepherds of the Church believe in the same way. Sadly, we know that not to be universally the case.

In Miles Jesu we say we are neither liberal or traditional..just 'Catholic'...

What all the members of Miles Jesu have in common is:

1. An unwavering loyalty to the Holy Father and the Magisterium of the Church in faith and morals. Miles Jesu is neither "conservative" nor "liberal." We are simply Catholic,
2. A thirst for holiness in a spirit of availability, each one according to his or her own state of life;
3. A strong devotion and reverence for Our Eucharistic Lord;
4. A tender and loving devotion to the Immaculate Heart of Mary.
5. A clear understanding and practice of true lay spirituality and apostolate in temporal affairs and ordering them to the plan of God" (LG, 31).

I could't agree more, but other people attach their labels to me, and, I suppose, nothing's going to stop them.

I have ben called traditional, conservative, old fashioned, and eccentric.

I think on the whole I prefer these things, in myself, and in other people, to being revolutionary, dissident, trendy, or just plain silly.

A short while ago, Fr. Ray posted on extremism, particularly of the left. Well, no one has so far called me extremist, loony, fundamentalist (whatever that is), or uncivilised, so I'm probably not doing too badly.

Umblepie,
The teaching of HV is good and necessary. In E & W little is done to support its teaching therefore couples find it difficult to live it out.

As always an excellent posting, succinct and humble and, scalpel-like, to the heart of an important issue. I have no doubt that the majority of your brother priests in your diocese could and would make the same sincere declaration of their beliefs if asked. At the risk of courting controversy may I ask what your advice would be to a brother priest who felt that he could not make such a declaration even if he had the fullness of the priesthood?

I try to avoid using terms like conservative and liberal Catholic because I think they're inaccurate, misleading and tendentious. And I don't think one can pressgang political terms into religous discourse anyway.
I use the terms orthodox and heterodox.
Frequently people who are described as "liberal" Catholic aren't Catholic or even Christian in any meaningful sense of the word.

Fr Ray, your post is very moving and, in the current circumstances, very courageous. May God reward you.

Sussex Catholic,
I simply don't know what to say to brother priests who don't share what I, would consider core Catholic beliefs.

We believe exactly the same thing. Signed, Terry the Catholic in Minnesota.

Well, said...signed by Joe of ST