At the Piazza di Spagna 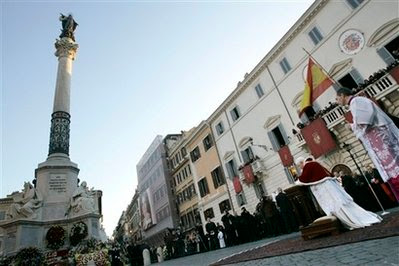 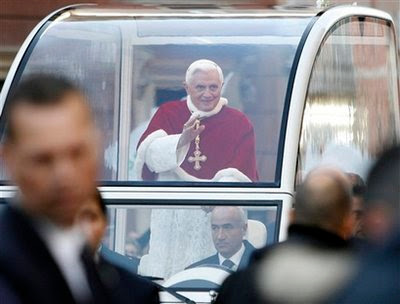 CNS) -- Laying a basket of white roses at the foot of a statue of Mary, Pope Benedict XVI said Catholics can lay everything at the feet of their heavenly mother.

"Symbolically, these roses can express everything beautiful and good that we have done during the year," the pope said during his visit to the center of Rome Dec. 8 for the traditional ceremony alongside the statue of the Immaculate Conception near the Spanish Steps. 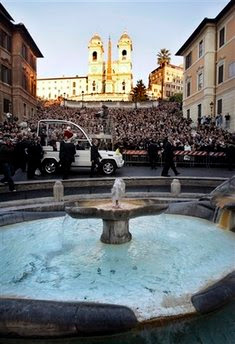 "But, as the saying goes, 'Every rose has its thorn,' and the stems of these stupendous white roses are not lacking thorns, which represent the difficulties, sufferings and ills that have marked and still mark the lives of people and of our community," the pope said. 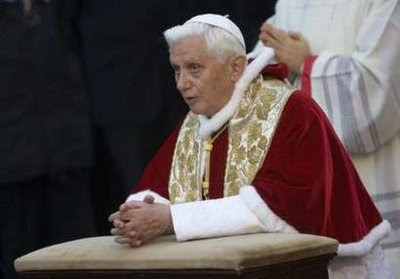 Under brilliantly sunny skies, bundled up against a crisp chill, thousands of Romans and tourists jammed the square around the Spanish Steps to see the pope and pray with him.

Offering the roses to Mary, the pope also entrusted to her his special prayers for children, particularly those who are sick, disadvantaged or suffering because of family problems.

He prayed for elderly people living alone, for the sick, for immigrants struggling to build a new life in a new country, for families who barely make ends meet and especially for people who recently have lost their jobs.

"Mary, teach us to be in solidarity with those who are in difficulty, to bridge the increasingly vast social disparities; help us cultivate a livelier sense of the common good," Pope Benedict prayed.

The pope said the beauty of Mary, conceived without sin, "assures us that the victory of love is possible; in fact, it is certain. It assures us that grace is stronger than sin and therefore it is possible to be redeemed from any form of slavery." 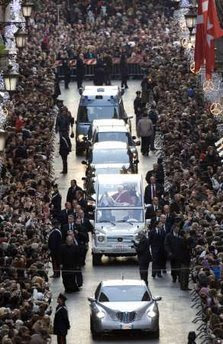 The example of Mary's life helps Christians believe in goodness, graciousness, service, nonviolence and the power of truth, he said.

"She encourages us to remain wakeful, not to give in to the temptation of easy escapes, but to face reality with all its problems with courage and responsibility," Pope Benedict said.

The pope said that, looking up at Mary, Christians experience the same sensation a child has when looking up at his or her mother "and, seeing her smile, forgets every fear and pain."

"Turning our gaze to Mary, we recognize in her the smile of God, the immaculate reflection of divine light, and we find new hope even in the midst of the problems and dramas of our world," Pope Benedict said. 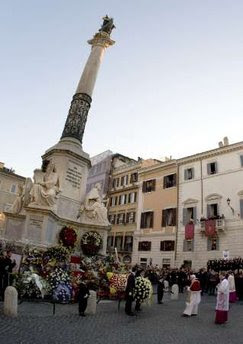 Earlier in the day, the pope recited the Angelus with visitors gathered in St. Peter's Square.

I can't find a picture of the firemen putting the wreathe of roses on Our Lady's arm.
at December 08, 2008

Where is this square ? Shall it be anywhere near the Piazza di Spagna ?