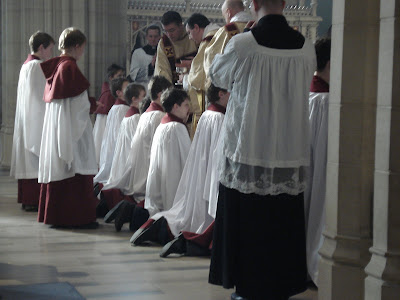 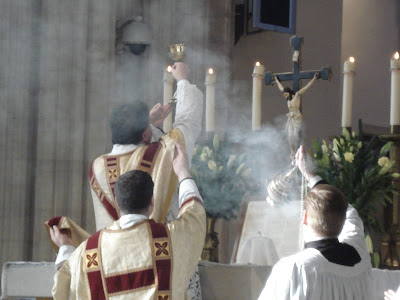 I thought you might like to see these pictures of last weeks Mass at St Georges Cathedral.
I think it is rather splendid how the Traditional Rite is becoming part of mainstream Church life. A great deal depends on people exerting their right and asking for it, as well as coming along when it is offered.
Little by little I hear of priests, young and old, beginning to say it.
On a personal note I said my second public Mass and it only took 45 minutes! My problem is that I get so taken up in the unfamailiar beauty of the prayers, I want to pray them rather than just say them. I know, it is a bit of self indulgence, it is sad that the present Ordinary Form English translations lack that beauty, in comparison they are functional, utilitarian and reflect the 1970's the period of their creation and translation.
at December 09, 2008

"I want to pray them rather than just say them"

Are you supposed to just say them? The most powerful Mass I have ever been to was offered by an 86 year old priest who prayed every word of the Mass. I know you should not fixate on the holiness of the priest but I cannot but say that his love of Jesus Christ was an inspiration to us all. To hear a priest pray fervently those prayers is so helpful to those of us who are sometimes a little lukewarm.

Wonderful, and some more good news from 'Paix Liturgique' newsletter this morning. Cardinal Vingt-Trois will offer an EF Mass in Paris this coming Sunday. More details on the 'Oasis'. (I wonder if they'll show that on kto?!!

Have tried to email you a couple of times but they've come back to me. Will send K's address by snail mail.

Assurance of prayers and thanks for all your posts... required daily reading in this household.

Father Ray - please carry on 'praying them rather than saying them'. We are all so grateful to you and I am sure none of those present would wish to hurry you in any way.

There is good and surprising news from France today! The Cardinal archbishop of Paris will be celebrating Mass in the EF on Sunday at St Germain l'Auxerrois. After his comments on not liking 'cluttered' altars perhaps he has had a change of heart? More information is on the Oasis in French Catholicism website - Jane kindly sent me an email this morning to let me know.

TLM has much to recommend it. I do think, however, the liturgy of the Word in the New Rite is better, in that it is much more accessible to the people to be understood. One thing learning an unchangeable part of the Mass in Latin. But I've run into far too many people old enough to know better (educated ones too) who claim "the church didn't want us to read/understand the bible." Which I know is bunk, but it seems a significant amount of people held that position. NOT that the NO lectionary couldn't stand some tweaking. For instance I'd make sure EVERY year the John 6 discourses were read. Not just year B.