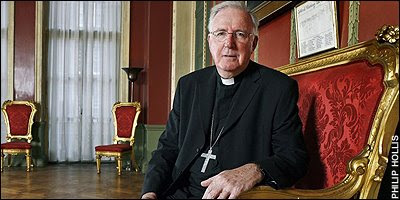 Cardinal Murphy O'Connor who retires later this year was the guest editor on BBC's Today Programme, part of the programme had the Cardinal visit the kitchens of Locatelli's London restaurant to learn how to cook.
I am incredibly fond of him, he ordained me and always showed me a great deal of kindness afterwards. In the diocese of Arundel and Brighton, he is regarded with a lot of affection by the clergy, partly because he cared about us. He enjoyed the company of his priests, wasting time with them, often telling stories against himself.
at December 30, 2008

I think the Cardinal gets far too much unpleasant criticism from certain 'counterknowledge' journalists and the like. The Cardinal appears to be highly respected by those who know him.

Nice to know some who wear the red hat still have the right stuff. Now if Roger Mahony would just retire....

I thought it was a wonderful piece of radio broadcasting, and fine example of the encounter between faith and culture.

Frankly, I never understood why Bishop Cormac left the (relatively)quiet waters of Arundel & Brighton for Westminster.

After so many years, he must have felt at home in A&B.

Mind you, look what happened to Fr. Joseph Ratzinger who at one time seemed perfectly secure in academe ...

Last Sunday (28th December 2008), a Pastoral Letter from Cardinal Murphy-O'Connor was read. The Cardinal stated it was the Feast of the Holy Family. Yet we were celebrating the Feast of the Sunday within the Octave of the Nativity and the Mass being said was that of the Sunday in the Octave.
I wondered what Ordo the cardinal used. I wondered if I was in the right Church. I wondered just how insensitive to the needs of the faithful he must be. I wondered what congregation he was addressing. I did so much wondering that I failed to hear the rest of the Pastoral.

Nat,
Actually the rest of the Church was celebrating the Feast of the Holy Family. It generally happens on the Sunday after Christmas.

Nice to hear you say those kind words about CM'OC.
However, it would be nice to hear you speak up in his defence more often though. I am sure you are aware of the unfair and often untruths constantly rallied against the poor man, who in many traditionalist's eyes can never do anything right.

As fond as I am of H.E. and as much as I know him to be a good and gracious man, I think he has often chosen poor advisors, many of whose careers have ended disasterously.

My guess is that "Nat" was being a tad sarcastic. I suspect that his church is one of the SSPX churches who follow the old ways and feasts. For Nat it may well have been the Sunday within the Octave of Christmas but the Ordo I use certainly had it as the Feast of the Holy Family.
Tell me Nat, what feast is it tomorrow? Is it the Circumcision or is it the feast of Mary, the Mother of God?

A good friend of mine , an educational administrator now retired, met him in the course of negotiations when he was Bishop of Arundel. She, a very liberal Anglican, describes him as "a perfect gentleman".

JARay
My Church is the one true Church,
The Catholic Church ruled by Pope Benedict XVI, the Vicar of our Lord Jesus Christ. This cannot be otherwise. The Church I attend Sunday Mass at is St James’s Spanish Place.

Though I revere the memory and daily pray for the canonization of Monseigneur Marcel Lefebvre it is some years now since I last attended Mass at a FSSPX Church. As it were one jumped into the sea and a rope was thrown from the barque of Peter. One grabbed that rope and thus remains tenuously attached to Peter on the way to Eternity. For some reason or other the words of St Matthew just keep popping up in my thoughts: ‘The bruised reed he shall not break.’

The feast of tomorrow (1 January 2009) is neither of the two you mentioned. The Mass I shall hear on New Years Day will celebrate the Feast of the ‘Octave Day of the Nativity’.

May I wish A Happy New Year to Fr Ray Blake and to you.