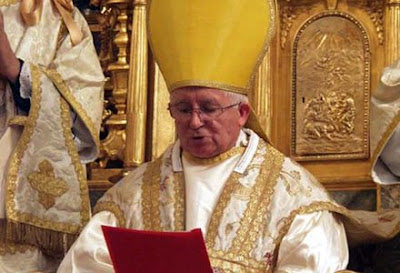 It used to take me forever to choose a birthday card for my mother when she was alive, just too many options.
It is the same with the many options in the Missal: how does one choose? Which Penitential Rite, which Eucharistic prayer to use, which post-consecration acclamation to choose, which dismissal? Many of the options, like the introduction to the Pater Noster will disappear in the new vernacular Missal which is due out in the next few years.
I am sure most priests don't make a real choice, either they always do the same thing, or else they rotate the options.
I was thinking that I might write to Cardinal Antonio Cañizares Llovera, the new Prefect of the Congregation for Divine Worship and ask him to issue guidelines on how choices should be made. There is a fascinating post on NLM about the The Problem with Options by Jeffrey Tucker dealing with liturgical Propers and there substitution with hymns but what about these options, Eminence?
When should one opt for Latin rather than the vernacular, I know to be more correct it should be other way round?

I am sure you can add to the list.
Another thing I would like him to clarify which is raised by the issuing of Summorum Pontificum is to what extent the liturgy is to be modified by Bishops or National Episcopal Conferences. SP tells bishops that their role is to regulate the Liturgy, not to micro-manage it. Does this apply to just the Extraordinary Form or is it now a general principle to be applied more widely?
at December 10, 2008

Father, it's simple. Eucharistic Prayer I EVERY TIME. I haven't heard it in years.

I always do thar unless there is good reason not to.

I agree with Gem, the options are real simple if you eliminate them...

The Lord be with you.
Penitential Rite A (I confess...)
Long form of the readings.
No prayers of the Faithful
EP I
Latin Propers
THe When we eat this bread and drink this cup memorial acclimation
Latin invitation to the Our Father

It's the one way I get around options when I'm teaching, eliminating them.

Just to echo Karen 'haven't heard it in years', sad to say.

I am interested in your comment that you almost always use eucharistic prayer I. Someone once told me that priests were supposed to use this prayer on Sundays and holy days of obligation - although many priests do not, as we know. Was my informant right?

Joe, I'd say the prayers of the faithful...but in a "controlled" manner. More along the lines the eastern rite does with a little room for some personal latitude. (i.e., yes, let's pray for all the people who died in plane crash X) - what I don't like are ones that are fuzzy wuzzy and look like they were written by some idiot from the Democrat National Committee.