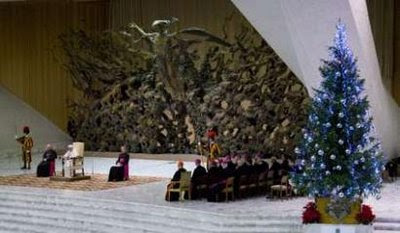 There are some beautiful things in the Pope's Catechesis from today's audience.

A.N. “Christians so not celebrate the birth of a great man or the end of a season", but “the pivotal moment in history: the incarnation of the Divine Word for the salvation of humanity”. “The mystery of our salvation is renewed”.

St Paul comes back again and again to this truth in his letter to the Galatians, “God sent his son born of a woman”. Or in his letter to the Romans, “if we are children of God we are also heirs of God….,” but it is above all “St John who meditates on the mystery of the incarnation” and for this in the Christmas liturgy since the earliest of times his “Et Verbum caro factum est…”, the Word was made Flesh, is used.

“But is it possible? A God who becomes a child? We need to bow our heads and recognise the limits of our intelligence. God became a child to defeat our pride”. He could have demonstrated his power, “but he does not want our surrender”, “he wants to set us truly free, to love Him”. “God came to communicate the truth that saves directly to us” and “make us participants in his life”.

I've often thought it might have been difficult as a child to have Jesus as a neighbor.

I can just see the neighborhood entreaties to children:

"Little Jesus always takes out the trash when his mother asks him." "Little Jesus never complains when Joseph asks for help in the shop." I always wondered if "little Jesus" got into a fist fight or two as a boy. [Self defense, of course!]

The pope didn't really say "the first census" did he? I'd have thought there were many censuses before!

Gem, I had to clean up the Asia News translation a bit, I mioised that one. I am sure he didn't say that, it doesn't make sense, I have removed it.

At first I thought the picture was of the White Witch from The Lion, the WItch and the Wardrobe... It would appear not.

Truely wonderful words Fr Ray - just shame about that hideous looking 'backdrop' behind our Holy Father which attracted a fair bit of stick (er, sorry... I mean comment) on your blog a week or so ago - ha ha!

“Et Verbum caro factum est…” - you can scarcely take in the enormity of this event and its significance for the entire human race.

All that comes to mind is to fall to my knees with a deep and sincere 'Deo Gratias'.