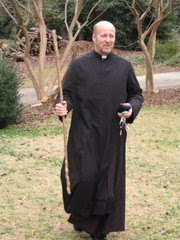 Father Dwight Longenecker highlights two articles in yesterday's Telegraph, the first refers to a preface written by the Archbishop Westminster for a book, called Faith in the Nation, is published by the Institute for Public Policy Research (IPPR), with the backing of the Prime Minister. In it he claims that Catholicism has borne the brunt of "liberal hostility" in its battles to fight for values it considers to be "fundamental pillars of a rightly ordered society".

The second is about secrecy and cover up by our government - nothing new but this time dealing with late term abortions in Britain (even up to 24 weeks and later) are being carried out on children with deformities no worse than a club foot or a cleft palate. Fathe Dwight entitles this "Police State UK".
at December 07, 2008

IT's been a convienient fiction for a long time. I remember the furor some years back when it came out that a woman had aborted ONE of her twins. She wanted one kid, not two.

When I got to college I took a course on US Constitutional Law. Part of the coursework involved reading the Roe V. Wade decision.

Ditto your '67 bill allowing for it.

The scam has always been "health of the mother" -- which 99% of the populace has no clue means some woman saying "I'm just gonna go crazy if I have this kid." NOT that other reasons are valid either, but a nominally majority protestant (and a great many Catholics, unfortunately) will buy this "except for the health of the mother clause" without pausing to think what it really means.

And that damn Obama is threatening now to wipe out what gains we in the US prolife movement have managed to secure after years of work.

Disgraceful of course but once someone stars bending the rules (as in allowing legal abortions to take place) there will always by those who want to bend it until it nearly breaks. It is still infanticide no matter what sugared title they give it.
Just like calling Euthanasia, 'dying with dignity'.

Well, he should know. He welcomed ME into the Catholic Church, after all.