Catechesis: does it work? 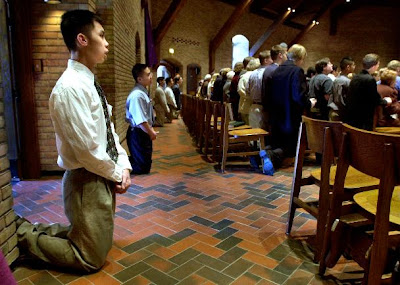 I am still troubled by those Japanese who without a priests or the sacraments, except baptism and marriage maintained the faith for 200 years.

Sometime ago a man about 28, a woman of 30 both English came see me about getting married. Both had 13 years of Catholic schooling, they were living together, neither had practiced since they were 15 and confirmed. I suspect that might have been the last time went they went to confession too. After 13 years of Catholic education they really didn't have a clue.

Traditionally the creed, not the scriptures, was given to those preparing for baptism, in ancient catechesis people were taught to do things: to be reconciled to neighbours and to keep the commandments, certainly, but also to genuflect, to kneel to pray, to bring flowers to the statue of the Blessed Virgin, to suffer and offer things up, to take part in processions, to go to Mass and devotions, to undertake the cycle of fasting and feasting. Obviously they were given a framework in which to think about God, but they were not expected to take part in theological speculation, which is so much part of today's catechetical methodology.

There was an old Jesuit, Fr Hugh Thwaites*, who was the most extra-ordinary evangelist, he received dozens of people into the Church every year. When I asked him what scheme he used for his converts, he said, "I just teach them to say the Rosary". I think he was returning to the methodology of those early Jesuits. It was the Rosary after all St Dominic used primarily to re-evangelise the Cathars of Langue d'Oc.

I think we ought to re-examine the whole way in which we catechise both our children and adults, Catholic Secondary education is just not producing the fruit that we expect. I suspect that we should be substituting practical Christian living for the theory stuff, the prayer desk in the chapel for the study desk classroom. The basis of catechesis should be to inculcate devotion to the person of Christ, rather than mere knowledge about him. Seeking knowledge of God will always follow devotion to him, but it seems rarely to work the other way round. We need to teach people to be Christians rather rthan merely to know about Christ.
*Fr Thwaites is quite sick and unable to say Mass nowadays, pray for him.
at December 08, 2008

I don't know whether you know about the following website which has some fascinating photographs of things relating to Japan's Hidden Christians? If nothing else, it shows the value of sacramentals in keeping the faith alive. Though it does leave me wondering just how much they retained. Many were attached to their customs and did not return to the Catholic Church when the missionaries returned. The miracle is, I suppose, that some did!

"Whatever we learn to do, we learn by actually doing it" Aristotle - Nicomachean Ethics

Very interesting post Fr. With seven children still in ' Catholic ' schools I'm always watchful. I have heard such good stories about Fr Thwaites...I expect you Priest bloggers & excellent non-bloggers too give us hope.

"The basis of catechesis should be to inculcate devotion to the person of Christ, rather than mere knowledge about him. Seeking knowledge of God will always follow devotion to him, but it seems rarely to work the other way round. We need to teach people to be Christians rather rthan merely to know about Christ."

Right on point. and it doesn't help if the schoolkids have mom and dad undercutting what the school teaches. (Or SHOULD teach, in some cases!)

"Give me a child until he is ...." the Jesuits said. unfortunately too many parents think all this "devotional stuff" isn't necessary, old-fashioned, etc.

Can a child be lead to the Saints and Jesus without? It happens. You were. But it's tougher sledding uphill for the average Joe/Jill I think.

Father Ray, I think you are very very right here. This is a really great summary and a template for every family to consider putting into effect.

“I would rather feel contrition than know how to define it. For what would it profit us to know the whole Bible by heart and the principles of all the philosophers if we live without grace and the love of God?” ~ Thomas à Kempis, from The Imitation of Christ.

Very good post! I did a presentation at a neighboring parish to kids age 12 - 16 or so about Adoration. Ready? Not one of those kids had ever heard of Adoration or been to one.

Now being older than you, I was raised on the Baltimore Catechism by Sisters of St. Joseph. We did the "head" work but we also went to Mass every day, said the rosary many times per week, had May crownings, processions, and all the other great stuff. Guess what? We're all still Catholics!

Well said Father. Despite attending Catholic schools until I was 18, with "Religious Education" most of the way through, my knowledge of the Faith when I left was abysmal. And I left school 20 years ago - I dread to think what it is like now.

My children are now starting school, but I am sending them to a secular rather than Catholic one. Far better to be taught the Faith at home rather than for home to be conflicting with not-quite-Catholic drivel from school.

The rest of one's knowledge of the world develops as one progresses throughout school, but the religious side is left neglected. No wonder most young adults conclude that the Church is for children, and lapse as soon as their parents stop taking them.

I went to confession to Fr Hugh once. There was no psychoanalysis from him, he just forgave your sins.

We were sad to hear that Fr. Hugh is unwell and we will add him to our prayers. He inspired us a lot a few years ago when we met him in Walsingham and we have his little book on 'Our Glorious Faith'!

You say a lot of good stuff on catechesis here.

We are doing catechesis classes as a large part of our ministry now. We follow the intentions of the General Directory on Catechesis by seeing the point of catechesis as seeking to put people into Communion with Christ.

Then comes cateshesis - Pope John Paul II called these 2 essential moments of one movement of coming to Christ.

In a recent talk we suggested that knowledge and love are not opposed. Love must come first though. Then the knowledge - leading to more love and so forth. We also have to know whom we love in order to love them.

In the past - in our blog posts and in talks and discussions - we have critiqued some forms of evangelisation as being too focused on emotionalism and not enough on engaging the reason, the memory, intellect and will.

We do not however mean to be against devotion. Indeed, quite the opposite! True Catholic faith is deeply imbued with authentic devotion and devotions.

We rather speak against a form of 'Protestantisation' of evangelism which we have several times encountered wherein people have been encouraged to become publicly vulnerable and emotional in order to achieve some kind of public commitment. This has at times been detrimental to people's human dignity and has caused us concern.

It would seem that the antidote, as it were, would indeed be proper Catholic devotion. A vital link which brought me into the faith was the 40 hours of Eucharistic Adoration and the May Marian processions in my parish back in the late 80's/ early 90's.

We also seek to use each catechetical instruction as a means to call our hearers to a conversion and reconversion of heart to Christ. All catechesis should truly be seeking to allow Christ to reach His people and to call them into ever deeper friendship and communion with Him. For these reasons, the Catechism, the General Directory on Catechesis, and Pope John Paul II's Catechesi Tradendi call for catechists to become more like Christ. Indeed, to the extent that the catechist becomes like Christ is the extent to which He will be imparted. They are to share Christ and His teachings. That is the challenge which clearly requires His Grace and love.

One of the key ways to respond is indeed the Holy Rosary. This together with the frequent reception of the Sacraments is the way.

Folks in our group are finding that the more we prayerfully study the catechism, the deeper our love for Christ and His Church is growing. We are being continually evangelised and re-evangelised by receiving the Catechism as the 'Sure Norm' of Catholic teaching as Pope John Paul II called it; as opposed to the watering down and open ended discussion which so frequently occurs and gets catechesis a bad name.

Thank you for your reflections on this important issue.

In Christ
Alan and Angeline