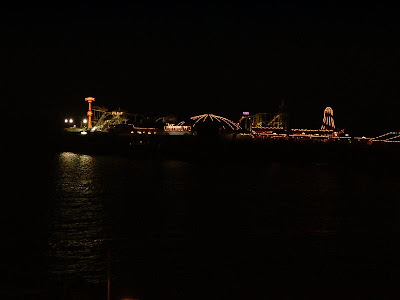 
10 am Requiem for Ethel, followed by her cremation12.05am chat with some people hanging around the house - cup of coffee
12.30 office stuff
2.30pm Communion round

4.30pm Meeting with Voices in Exile and the Sheriff or is it High Sheriff of East Sussex, he seemed to care - harrowing stories from the refugees, especially from Zimbabwean women and Dafurian men, who were desperate to be allowed to work.
6.00pm Bit of quiet time and preparation for Extraordinary Form Mass
7.00pm EF Mass, I am really beginning to love it, all that altar kissing and Dominus Vobiscuming, the silence is beautiful, it took 45 minutes, the congregation quadrupled on last weeks.
8.00pm Coffee for a few people who came into the house, realised I hadn't eaten today, did a bit of shopping.

9.00pm Went to parishioners party for the prospective Labour Party candidate, a Ms Nancy Platts, there were no more than 7 LP members there. I told her about a Zimbabwian woman sleeping on the beach, she seemed incredulous, I suggested she came to meet Brighton Voices in Exile, she seemed totally disinterested. She told me she worked in consumer's affairs, told her I thought it was a bit Blair Babish, not so much because of her job but because like most politicians she really did seem inconsequential and lacking any vision, worst lacking in compassion. Didn't think it worth talking about human dignity. Poor, sad, new Labour! Maybe it is cruel to talk about her here, but she is unlikely to get my vote unless I see some sign of either caring or vision. I am sure the lack of vision has something to with lazy atheist fundamentalism, such a characteristic of the left today.
I met a feisty American women, she would make a splendid alternative, who told me Eric Gill was received into the Church here, must check the registers.

Aneurin Bevan said that "The Labour Movement is a crusade or it is nothing". Morgan Phillips, for many years Secretary of the Labour Party said that "British Socialism owes more to Methodism than to Marxism". Keir Hardie was a Protestant Christian, Wheatley of the Red Clydesiders was a Catholic, Clement Atlee and Sir Stafford Cripps were devout Anglicans. Apart from Frank Field where are their equivalents today?
Perhaps what we need is the equivalent of the Christian Social Union which has ruled Bavaria for many years .

I was seriously unimpressed by Labour's candidate. I would have voted Green if they had kept Keith Taylor but they parachuted in Caroline Lucas who sounds horrendous and is advocating the old failed Old Labour policies, so I won't vote for her either. The Conservatives have nominated a gay medic who is very pretty and quite jolly but that is not sufficient to get my vote. Don't know about the LibDems, the old Liberals used to be quite strong in these parts but the party lost its way when they become part of the Social Democrats, which they would not have done if the had known what Liberalism was really about. Now they are peddling nonsense like Local Income Tax and are much too uncritical of the EU.

When mainstream politics are in the state they are, we need to beware. With a tidal wave of inflation a few years down the line, there could be a place for extremists in the UK, running policies based on xenophobia.

I received a leaflet from Ms Platts through the door inviting my views a week or so ago but up to now have not filled in in. Thanks to your posting, Father, I now know what I shall comment on...

Please do remember to eat today!

The only thing I could find on google about nancy platt was a meeting she was going to have with Brighton Skateboarders on 18th August!

Your experience with her was sadly my experience with the Labour Party "good ones" Jeremy Corbyn, Tony Ben et al. When the labour party were having a conference in Brighton a couple of years ago and we were on a demo (anti-war or mph) - in the evening outside their "fringe" meeting at the Friends Meeting House there was a desperate young woman who I tried to get help for - none of them were interested - in fact I got abuse for drawing attention to something off-topic! That was my one and only experience of a Labour party meeting.

Thank you Father for your Latin Masses. I think you are probably bringing many people back to the faith just by sharing your daily life (make sure you have at least 2500 calories/day so you can be around for a bit longer though :O)

My parish priest (outside Southampton)doesn't "do" Latin - I asked him to say Mass in Latin for my aunt who was in the Latin Mass Society and was told to go to Fareham. He doesn't even mention holy days of obligation.

An otherwise great priest who works tirelessly for all sorts of causes and has a flourishing congregation in the centre of Southampton doesn't think it is fair to say Mass in Latin!!

How does one sensitively encourage such priests to listen to The Pope?!

Judging by their performance on the HFE Bill all the parties are morally bankrupt. I have never been much into party politics but it seems to me we are in desperate need of a new party openly based on Christian principles. I suspect that if you ignore the secular press who represent only themselves and look directly at the electorate you will find a real desire for such a party.

We are constantly told we live in a secular society. I don't believe it. At the 2001 Census 72% identified themselves as Christian, with just 15% saying they had no religion. Certainly the number of regular churchgoers is nothing like that. But these are cultural Christians, at least, and clearly wishing to line themselves up with Christian values at some level. The secular myth is drummed into us by the secular media.

But how to do it in the face of hostile media? Many years of observing the behaviour of the media in the context of bioethics convinces me that we do not live an a democracy. We are controlled by those who control the media.

I would be really worried about you if that was a typical day in your life ! you need to be careful about overdoing things and not eating meals otherwise you will be RiP before too long and we need priests like you.

I've been googling Nancy Platts to find out more about her as well. On her blog for August she mentions that she was 'up and out early for the Brighton Pride festival and met with the local LGBT group.' How very sad that she seemed disinterested in meeting the Brighton Voices in Exile at your invitation. If I were to be cynical I would say that she was after the LGBT votes whereas the Voices in Exile perhaps do not even have the vote?

Interesting to see that Henry was 'seriously unimpressed' by her as well. I shall try and be prepared should the new candidate come canvassing here!

Pauline Gately said...we are in desperate need of a new party openly based on Christian principles. I suspect that if you ignore the secular press who represent only themselves and look directly at the electorate you will find a real desire for such a party.

We Christians ourselves need to be clear about the way in which Christian principles can be translated into practical fiscal and legislative policies that will sustain economic freedom and justice. We have not been good at this - I would go further and suggest that this failing is one of our greatest weaknesses.

What a fascinating post. But "must remember to eat tomorrow" won't do at all. You need regular meals and at least some rest, as Fr. Clifton points out in his comment.

I'm so very glad Fr. Ray is "getting the feel" of celebrating the old Mass. A priest must find it a prayerful and deeply enriching experience. I have always thought that people will turn up in geater numbers where there is a regular celebration. It will deeply enrich the spritual life of the parish, too.

Meanwhile, a busy priest need his food and his rest !

Dear man! Please remember to eat. You need to rest up so you can build a lovely creche like you did last year.

[I have forgotten my social [in]security number, my mother's maiden name, where I put my car keys, but never, EVER, have a forgotten to eat!]

Yes there certainly are grounds for a space on the Ballot form that just says NONE OF THE ABOVE ,why should we lose our vote because all the candidates are picked by a bunch of activists with their own selfish agendas.Greens,vegetarians,comic singers,trick cyclists and other assorted malcontents.

I'm afraid that Eric Gill was received at the Sacred Heart, Hove: I've seen the entries. Sorry to disappoint! Caryll Houselander was, too.

Dear Fr., with three severely disabled children in a family of eight, I confess that I too, have sometimes forgotten to eat.
However, I usually made up for it!
Some years ago, at a youth 2000 retreat, an elderly Jesuit was seated at my table for lunch. A lady came to him and mentioned that a young retreatant wanted to see him...
The Priest hadn't eaten any of his food, but got up immediately and went off.He didn't return to his meal.I was deeply moved by this, and try to remember his example at times when a choice needs to be made between looking after myself, or looking after my children.

Yes indeed, Fr., wonderful and saintly Priest that he is.

Can you sell your diet Fr Ray?