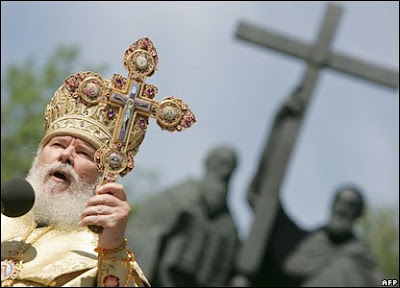 The Russian Orthodox Patriarch, Alexy II, died early today at the age of 79.
Can we expect a thaw in relations between Moscow and Rome, I suspect until there is Czar, it is unlikely.
It is not me being nostalgic for Imperial Russia but simply stating that Patriarch and Emperor are together leaders of the Orthodox Church, the former governing the inner and the latter the outer mysteries. Ecumenical dialogue touches the inner mysteries because it is about theology but reunion or even co-operation is about the outer mysteries, structures and organisation which was always the Emperor's concern, in the case of Constantinople, even a Muslim Emperor. In the west these two functions were subsumed in the office of the Pope but as my Orthodox friends remind me, the Patriarch is not a Pope.
at December 05, 2008

We would be glad if you would post about three upcoming Latin Masses in Ireland: http://catholicheritage.blogspot.com/2008/11/holy-year-of-saint-paul.html. Please add us to your list of blogs.

No there is only one Pope. And he is The Pope for every person of every nation regardless of religion or non-religion in the whole world. What a responsibility!

RIP, May God have mercy on him.

We all hope for a thaw in the relations between Rome and Moscow, with the death of an 'old guard' figure. Alexy the Second, represented the old regime and old Russian imperial views. He made an attempt to move forward, but was stopped by his heart's love for everything Russian, at every step forward. Moscow to him was the Third Rome! He considered his office the defender of the Holy Orthodox and only true church.
Ecumenism was not palatable to him as a Russian Orthodox leader!

We must pray for a Holy Spirit guided Patriarch of Moscow to be elected. This man must open up true dialog with Rome and Constantinople, that will lead to unity! This man must recognize an autocephalous Orthodox church for Ukraine. This move, in Ukraine, would iron out the grave Orthodox situation there, which includes three Orthodox churches: 1. Ukrainian Orthodox Church-Moscow Patriarchate, 2.Ukrainian Orthodox Church-Kiev Patriarchate(Filaret) and 3.Ukrainian Autocephalous Orthodox Church(very small now), all at each other's throats. Also the new Moscow Patriarch must recognize the Ukrainian Greek Catholic Church and its Patriarch Lubomyr the First, so dialog with Rome could resume, because Alexy considered this an impediment to ecumenical dialog with Rome. Rome's support for the Ukrainian Greek Catholic Church had blocked Pope John Paul the Second's visit to Russia and stands in the way of Pope Benedict the Sixteen's visit to Russia. Rome stands by her eastern child and this must be recognized by Moscow as a bridge towards reconciliation between East and West! Ukrainian is that bridge with her unique church history, which includes Orthodoxy and Catholicism, as eastern examples that should and can co-exist!!!

PRAY FOR GOD'S BLESSINGS AND GUIDANCE UPON THE NEW PATRIARCH OF MOSCOW! LET HIM BE A TRUE MAN OF GOD!! A TRUE ORTHODOX LEADER WHO STRIVES FOR BROTHERHOOD!!!

A thaw between Moscow and Rome would be most desirable, of course. But I frankly think there would firstly need to be a thaw between The Russian Orthodox Church and the Ecumenical Patriarchate. Under the present Patriarch of Constantinople, Bartholomew I, this seems very unlikely.

Me and annoyance said...

Posted by nat:
----
PRAY FOR GOD'S BLESSINGS AND GUIDANCE UPON THE NEW PATRIARCH OF MOSCOW! LET HIM BE A TRUE MAN OF GOD!! A TRUE ORTHODOX LEADER WHO STRIVES FOR BROTHERHOOD!!!
---
Dear nat, brotherhood of true god followers is not represented by the quality of relationship between the high level church leaders but by the quality and the warmth of the relationships between people themselves. Church is the place of gathering and seeking advice, and not the place where you should judge your neighbours.

By the way, Tsar is the correct spelling, not Czar.

As Czar is a form of Caesar, Czar is correct.

Patriarch Alexis was a good man and excellent leader standing always firm as a witness to Christ and never compromising.

I was impressed by him many years ago when he visited London. His address was both passionate and inspirining.

He will be remembered as the Patriarch who witnessed the tragic separation of ROCOR healed on Ascension Day last year.