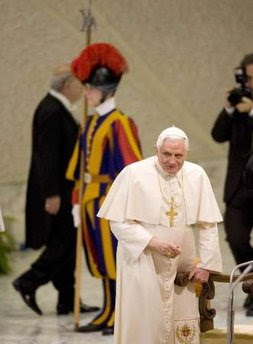 AP- Pope Benedict XVI says the global financial crisis is a result of the quest for short-term gains at the expense of the common good.

The written message released Thursday says the gap between rich and poor has become more marked, even in the most economically developed countries.

Benedict has been speaking out frequently on the world financial crisis. He said in the message that international finance should sustain long-term investments and development but that finance limited to the short term "becomes very dangerous to everyone, even for those who benefit when the markets perform well."
Full Text Here FIGHTING POVERTY TO BUILD PEACE
at December 11, 2008

Trouble is that the hardest working & thriftiest are going to suffer the most.

The GREEDY SPIVS who caused this problem will get away with it ,Governments will bend over backwards to save the Banks & Big Corporations.

The poorest and oldest will die of Hypothermia and the SPIVS will get wealthier.

I am not sure that the Holy Father is well placed to speak about the financial crisis. It wasn't so long ago that the Institute for Religious Works aka the Vatican Bank, had its own crisis.

Oh dear. He has not mentioned that four-letter word, something made by God, and without which no-one has a place to lay their head, grow their food or apply their labour.

Without it, man is forced to accept whatever wages a gracious landowner may care to offer, or pay as much rent as the landowner can squeeze out, for the privilege of occupying that which was given to all of mankind by God.

Time for another encyclical, methinks, which finally nailed this down. Perhaps on the 120th anniversary of Rerum Novarum which buried the issue by conflating land with human artefacts and regarding both as "property".