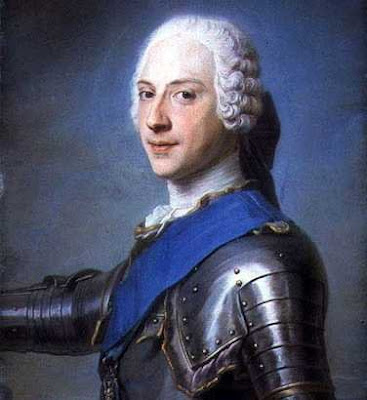 From the Daily Mail
According to one musical expert, O Come All Ye Faithful, also called Adeste Fideles, is actually a birth ode to Jacobite pretender Bonnie Prince Charlie.
Born on December 20 1720, Bonnie Prince Charlie was the grandson of England's last Catholic monarch, James II.
He was born in exile in Italy and became the focus for Catholic Jacobite rebels intent on restoring the House of Stuart to the English throne.
In 1745, he raised an army to invade the British Isles, taking Edinburgh, but was defeated at the Battle of Culloden on April 16 1746.
Professor Bennett Zon, the head of the department of music at Durham University, unearthed 'clear references' to the Prince in the carol's lyrics, written by 18th century music scribe, John Francis Wade.
'There is far more to this beloved song than meets the eye,' he said.
'Fideles is Faithful Catholic Jacobites. Bethlehem is a common Jacobite cipher for England, and Regem Angelorum is a well-known pun on Angelorum, angels, and Anglorum, English.
'The meaning of the Christmas carol is clear: 'Come and Behold Him, Born the King of Angels' really means, 'Come and Behold Him, Born the King of the English' - Bonnie Prince Charlie!'
Professor Zon said there were other clues to the subversive political message contained in the carol.
'In its earliest forms, from the 1740s to 70s, Adeste Fideles is often found next to, or physically very near, prayers for the exiled monarch,' he said.
'And in John Francis Wade's books it and other liturgical texts with "hidden" Jacobite meaning are often strewn - even laden - with Jacobite floral imagery. One of the books containing the carol even contains a colourful picture of the exiled monarch, as well as a Jacobite cryptogram in Latin on its title page.
'When deciphered it gives a very clear sense of its Jacobite connections,' Professor Zon said.
The Jacobite meaning of the carol gradually faded as the cause lost its grip on popular consciousness.
'Adeste Fideles seems to have lost its Jacobite meanings not long after Wade's last published book in 1773,' he said.
'The real meaning of the carol, remains, however, although whose birth we choose to celebrate in it remains a matter of personal decision
at December 18, 2008

Perhaps a good reason not to sing it then. However, I don't think 'God save the Queen' would be that suitable for the 'festive season.'

The Jacobites raised their standard at Glenfinnan in the Lochaber area of the West Highlands in 1745 (north of Fort William). It is still a strongly Catholic area, including the towns of Arisaig and Mallaig. There was a seminary nearby at Morar, at the western end of the loch of the same name, on an island called Eilean Ban. This seminary, which was razed following the Jacobite Rebellion, in a brutal suppression under the Duke of Cumberland, which virtually laid the country waste - the task was completed in the Highland Clearances in the nineteenth century. The landlords got the inhabitants shipped off to Nova Scotia and burned down their houses - those that wanted to stay had to go to Glasgow and live in the slums and work as factory fodder, and that is why the Clyde was a hotbed of Communists for so long.

The area is very beautiful and worth visiting - you can get there by public transport so no need to drive.

Interesting post. Along those same lines, I'd come across an article which said "The Twelve days of Christmas" was a song taught to Children a catechetical aid to Catholic children.

Another reason the hymn is best sung in Latin!

I happen to like that hymn...yet if this is the case, I'll do it in Latin.

Actually Benet Zon announced his theory about 12 years ago at the Catholic Record Society conference in Oxford. I believe it is now well accepted as genuine by other scholars. Fr Wade once taught at the secret Catholic School at Twyford near Winchester which after a short pause moved to Stanton Lordship in Herts, and then to St Edmunds Ware ....which of course still flourishes today and can claim to be the oldest Catholic school in England !

This is very old news

I read about this idea years ago.

The last one was from Jim

I can't get this blogger ID stuff organised. But I trust that you know that it's really me.