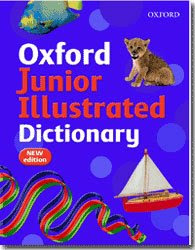 In a report by the Telegraph, editors have justified the changes by citing declining church attendance and multiculturalism.

The dictionary has also abandoned words related to the natural environment, plants and animals. New words have been inserted into the dictionary based on word frequency. These include: allergic, curriculum, celebrity, and MP3 player.

Vineeta Gupta, who is in charge of children's dictionaries at OUP told the Telegraph: "When you look back at older versions of dictionaries, there were lots of examples of flowers for instance," Gupta said. "That was because many children lived in semi-rural environments and saw the seasons. Nowadays, the environment has changed. We are also much more multicultural. People don't go to church as often as before. Our understanding of religion is within multiculturalism, which is why some words such as 'Pentecost' or 'Whitsun' would have been in 20 years ago but not now."

Who told the OUP to remove these words from the Junior Dictionary - I think there is a clue in the fact that the words 'devil' and 'sin' have been removed.

The 'father of all lies' that 'great deceiver' is much happier for children to grow up thinking that he does not exist.

Holy Michael the Archangel, defend us in this day of battle.......

I was always under the impression that people used dictionaries to look up words with which they were NOT familiar. I certainly do! Children need to expand their knowledge and to say that the removal of historical and religious words is due to multiculturalism is in my opinion ridiculous.

A Christian child might be curious when he hears his Muslim friend talk about the feast of 'Aeid' just as a Muslim child might want to know what 'Pentecost' signified. So both words should be in the Dictionary - that surely is multiculturalism? Not removing all trace of any words connected to Christianity.

How sad also to see 'cowslips' and 'starlings' disappear too - the latter are certainly familiar to Brighton schoolchildren and the former can still be seen on railway embankments.

The only word I approve of the removal is 'prune'! Being forced to eat them in school dinners gave
me a life-long hatred of them!

The OUP seem to have got a lot of publicity out of their omissions from their new childrens' dictionary. Like George I do wonder who was behind the project.
And is it really necessary to put in the names of all these modern gadgets - the children know them anyway. We need them in adult dictionaries!

Is 'Maoism' included in the dictionary?

They are trying to turn the British into a race of morons. And succeeding.

I have just had a closer list at those banned words. A lot of them are foods you can find on the shelves of any supermarket, or things you can see in any town park or even in the backyard.

Those whom the Gods wish to destroy they first send mad. (The saying is attributed to Lucretius but can anyone confirm this)

How many supid Nativity Play names can you come up with in our Catholic Primaries?

The wriggly nativity
the hoity toity angel on Humble Piety's blog...my kids call it dumbing down!

Deary me. The Endarkenment is now in full stride. To think how Oxford itself would not exist without the religious context that some of these words describe.

I don't wish to make a point based on race, but it's not unreasonable to question whether Vineeta Gupta's cultural/racial/religious background has anything to do with this. She is in charge of Children's dictionaries, after all.

Ma Tucker's comment made me chuckle! Not only Oxford though, much of what we call 'the civilised world' would not exist were it not for Christianity.

However, even that word 'civilised' might be described somewhat differently if I was to edit the dictionary.

This has Satan written all over it. Of course if anyone's like me, I use real dictionaries, no childrens' version for me.

Who are "children's" dictionaries actually for? From about the age of seven, I happily used a concise OED and a huge two volume Funk and Wagnall's - which had enough illustrations and tables to keep my interest long after I found the word I'd been looking up.

The OUP website states that the Junior Dictionary is "perfect for supporting the renewed Framework". As the "Primary Framework for Literacy and Mathematics" is a government-inspired thing from the DES, maybe the hapless politically correct Mrs/Miss/Ms? Gupta, as a good profit-chasing publisher, is only producing what the government wants (and will pay for through its education budget).

There is a palpable hatred among "progressive" educationalists of anything redolent of tradition or culture. Shame that the OUP has sold the pass, but such is the reality of 21st century Britain.

By the way, I notice on the hit list that "ivy" has been uprooted twice.

coronation, duke, duchess??? Don't you live in the UK?? How weird!

Most of those words look pretty common and necessary to me..

Londoniensis - ivy should be uprooted wherever it rears its ugly head! It's a real pest in my garden and no sooner has it grown up tree trunks it starts to sap the life out of the tree. If it gets a hold of your dictionary it will suck all the ink off the pages and then proceed to chew away at the binding!

Amused by George's comment on ivy. My neighbours on BOTH sides planted some decorative ivy a few years back and guess what? It has crept stealthily over the wall, on BOTH sides, invading my own garden. Now I can understand it creeping over the north wall to get at the sun , but over the south wall as well?!!

The good part is I have instant greenery for Christmas decoration courtesy of the neighbours.

Ivy is not invasive if you pick the right variety. Some are slow growing. Hedera colchicum dentata variegata is the usual indoor cream and white type but it will survive the winter and cover walls very nicely.

Wonder if the words -

Communism... Fascism... Dictatorship... Nihilism... Brainwashing... etc have been left in.

This is yet another example of social engineering at work. The Soviets called this type of exercise Mental Healing...

Perhaps the Holly and the Ivy would now read...

Not quite the same is it?