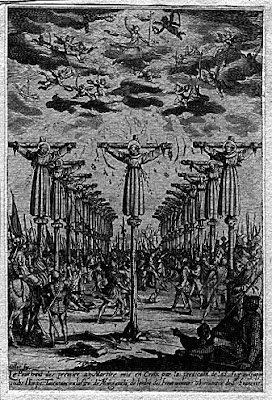 I have always been amazed by how the faith continues without priests or sacraments, Fr Tim has a moving account below of 19th century missionaries who found the Church continuing after bitter persecution and prescription for over 200 years.
In Greenland at one period, for decades after the death of a priest Catholics would gather to venerate the corporal on which the last Mass had been celebrated, the bishop had forgotten about them.


One 60-year-old lady kneels beside him and asks whether he considers this to be the 17th day of the time of sadness (Lent), and whether the next day is the eve of the feast of Saint Joseph. He answers yes. she places her hand on her heart and says: "The hearts of all of us here do not differ from yours."

Then a young man speaks up. His name is Peter. He is a catechist, he says timidly, and wonders whether Father Petitjean owes allegiance to "the great chief of the Kingdom of Rome." The missionary answers that the Vicar of Christ, Pope Pius IX, will be very happy to learn of their interest.

Peter, however, wants to make sure he has been understood. He asks, "Have you no children'?" "You and all your brethren," answers the missionary, "Christian and others are the children whom God has given me. Other children I cannot have. The priest must, like the first apostles of Japan, remain all his life unmarried." At this, Peter and his friends bend their heads down to the ground and cry out: "He is celibate! Thank God." Then they mention their village: "At home, everybody is the same as we are. They have the same hearts as we."

By now the priest is weeping with joy. He invites the small group in. There are 25 "Christianities" in the area, they explain, and seven ''Baptizers." They have longed for the return of priests. In a few days Father Petitjean will indeed meet some 2,500 well-instructed, devout and practicing Christians. Later, in Kyushu, another 15,000. They will all be fully instructed and devout. Cut off from all contact with the outside world, they will have all lived faithful to the memory of their ancestors who died for Christ, long ago.

My question is why did the faith persist in Japan, when here, now, we have difficult in passing it on from generation to generation? Persecution is obviously part of the answer but I don't believe it the whole answer.
For centuries the faith was past on by parents to children, and passed on with the Christian community, it was caught rather than taught, nowadays we expect it to taught but it evidentially it is not caught.
The witness of the Japanese believers seems to indicate that rites and rituals passed on the faith as much catechesis. Would it be too much to suggest that there might actually be problems with today's rituals, as much as our catechesis?
This is vitally important question as priests age, die and parishes are left without weekly Mass which in many parts of the country is likely to happen over the next five to fifteen years.
at December 04, 2008

Martyrdom and persecution are important, so is a strong Catholic identity which is the fruit of ritual, especially domestic rituals. I wish they were taught in Catholic schools.

Love to know whether they said the Rosary.

Father,
I think you ask the right question at the end.
It comes back to the lex orandi lex credendi.

God Bless you , love the blog!

It could be argued that, before our very eyes, the same thing has happened over the last 40 years.

Almost unseen, small groups of catholics have clung to the unchanged Faith passing it onto their family members, teaching them at home and travelling tens or even hundreds of miles to a Mass.

I am of course referring to Traditionalist families.

However, there are many many more, lapsed from attending Mass (or abandoned as they see it) since 1970 who still say their rosaries and devotions at home.

Great to hear that Fr. Ray.
When Ireland tasted the fruits of the English Deformation it was the Rosary which protected the faith of the people too.

Boy, Father, this is such a powerful story. We've just had the feast of St. Francis Xavier and when he left Japan he told his converts to ask 3 questions of those who would come after. And one of the questions concerned celibacy. (How do we in the West think of celibacy? Does it have any meaning, any efficacy?)
Another thought that came to mind was the parable Our Lord gave us on the "word" falling on fertile ground or stony ground. To me, what makes the ground fertile is a tremendous amount of "Humility". You can just see and touch the humility in the story you told. I'm afraid that in the West most people think they are self-sufficient and have no need for anyone else or anything else.

"One 60-year-old lady kneels beside him and asks ... whether the next day is the eve of the feast of Saint Joseph"

"I'm not sure," the priest replies, "haven't the Bishops transferred that one to the following Sunday?"