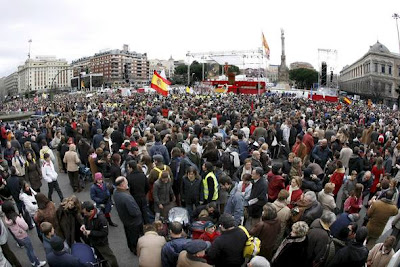 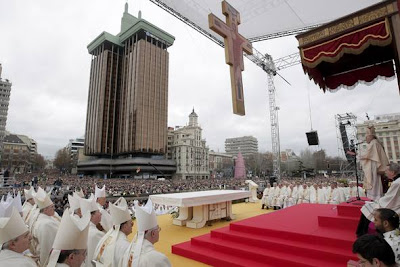 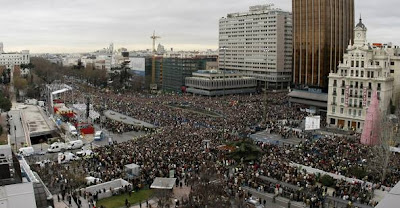 To celebrate the feast of The Holy Family in La Plaza de Colónan anestimated 1Million people turned out to demonstrate support for the Church as it struggles against the Zappatero governments anti-family policies.
at December 28, 2008

What heartening news for the Faith in Europe!

I've noticed over the past few months that Spanish groups at the General Audience and Sunday Angelus have been receiving a particularly warm welcome from the Holy Father and wondered why. (They have always been there in vociferous banner-bearing numbers, but apparently not from particular dioceses.)

It ist more than possible that he knew this huge Mass was being planned. (After all, he and they hope to meet at the next WYD in Madrid.) But whether he knew or not, what a wonderful Christmas present for him, especially in the wake of the recent British media distortion of his pre-Christmas speech to the Curial body. The action of the Spanish clergy and faithful puts to shame, the lack of official British Catholic defence of the Pope's reiteration of the Church's teaching.

I will pray that one of the first actions of the new Archbishop of Westminster will be to call for British Catholics to attend a Mass according to the Spanish example. Could 'the Dowry of Mary' not raise at least a million souls in answer to such an appeal? I further pray that I am not naively optimistic in hoping that she could.

And this was covered extensively on British new broadcasts...or not.

If 1,000 homosexuals had decided to hold a demonstration outside any Catholic Cathedral in the world, it would have been headline news on the BBC, but 1 million supporting the Church, that's not news.

Our family attended the mass this weekend. I posted about it a few times.

Pope Benedict did know about the mass, as it was the second year running we have had it and it was announced a long time back that he would address those of us at the mass via videohookup - just as last year.

Not sure if there were really one million people there (friendly press said half a million), although the Pope when he "greeted us" said there were a million, so who am I to disagree.
http://robertstevenduncan.blogspot.com/

A most heartening post, which others in the 'blogoshere' are also reporting.
Leadership 'from the top' is so important. Last year (2008), in the Australian state of Victoria, the government decriminalized abortion. The opposition to this was led by Archbishop Denis Hart of Melbourne. In a Pastoral Letter, he wrote: 'Catholic hospitals will not perform abortions and will not provide referrals for the purpose of abortion.'. One-third of hospitals in Victoria are run by the Church.

Noting Stephen Morgan's comment I suspect this opposition went under-, or unreported in the British media.