St Nicholas the Wonderworker, who beats up Arians 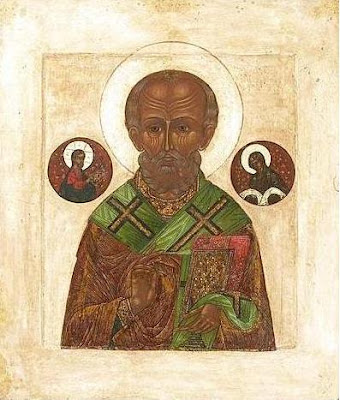 I find something incedibly attractive about saints whose post mortem careers outshine the acts of their life. St Nicholas' life is lost in legend, what we have is the experience of those who pray to him.
The Russians have a saying, "If God left us, do not be sad, we would still have Holy Nicholas". His prayers work. The cultus of Nicholas is independant of historical fact. It is like the pre-reformation cult of St Thomas that grew and grew because his intercession worked miracles and prayers addressed through him were answered.

Many in the West suggest that the working of miracles should be dropped as a requirement for beatification or canonisation, the Lourdes authorities have decided it is impossible today to define a miracle, many suggest Newman should be beatified without a real cultus or miracles, I suspect it is because we have moved to a neo-Pelagianism, or an Arianism that is uncomfortable with God's intervention in the world and our lives.

One of legends of St Nicholas is that he confronted Arian bishops at Nicea, tearing at their beards, punching them in the face, for this he was stripped of his episcopal dignity and imprisoned. That night Our Lady appeared to him and restored his stole to him, whilst Christ blessed him. His miracles, his association with the Feast of the Incarnation are strong and simple catechetical statement that God is involved in his people and the life of the world.

The centre of the Christian faith is God has become flesh and dwelt amonst us, St Nicholas the Wonderworker is a mighty sign of God's dwelling amongst us, and Christians' experiencing his presence in their lives. Still he beats up Arians and sends them running, still he is the terror of those Pelagians who want to make grace a psychological, rather than divinely given, power.
at December 06, 2008

I have that lovely Icon from Temple Gallery you gave me on my wall now, Father. Its very beautiful.

Sometimes the MAILED FIST is more appropriate than the Velvet Glove.

At least it would create space in the prisons.

Thanks for that father. About 4 years ago I was in Cyprus at the Church of St. Spiridon and picked up an icon of St. Nicholas in the shop around the corner. It's now in my kitchen and I've often prayed for his intercession. I chose it because I just liked the picture. I'd always wondered what his story was. Pulled the beards of Arians and punched them. That sounds like my type of Catholic.

Perhaps you could expand on your reference to the Lourdes authorities and miracles.

My understanding of the new position of the shrine with regard to miracles was that it tries to allow "miracles" that cannot be strictly proved to be "miraculous" to still in some way be recognised as showing the work of God. It doesn't abolish the process with regard to "proven miracles" at all, but makes it easier for God's work to be the subject of public testimony.

Joe, I think you have summed up the situation correctly, but I do think it is symptomatic of a discomfort/dis-ease with the supernatural.

Having now looked up the Bishop of Lourdes and Tarbes explanation of the "new" (more accurately, recent, rather than new) position on miracles at Lourdes, I don't think I agree that it shows any unease with the supernatural.

The procedures of the Medical Commission for the recognition of a miraculous cure remain; the possibility of recognising a miracle that meets the canonical requirements for such remains unaltered.

However, there are some situations where healing does occur, but the strict conditions for canonical recognition cannot be met. Bishop Perrier cited the example of cancer, where in every case a course of medical treatment (and it would be negligent for doctors not to have started treatment at the earliest opportunity) makes it impossible to distinguish a possible miraculous cure from the possible efficacy of the treatment. It is these situations that Bishop Perrier wished to address:

"If we take the person into consideration, what is important is the fact that he regained his health and that the event occurred in the context of prayer ... I wish that, in this type of situation, the person may be allowed to testify to the grace received".

Such situations will still be subjected to the consideration of the Medical Commission, to verify the circumstances of the healing and protect against possible hoaxes. However, the impossibility of verifying it canonically as a cure will not now be a bar to public testimony.

A bit late I know, but an article that has interesting contents. I was away staying with a non-Catholic family for Sinterklaas here in the Netherlands and the kindness was amazing.

We spent our day on Saturday visiting the reconstructed late medieval priory at Ter Appel were I was given the chance to talk about the Church and the Catholic heritage of the Netherlands. Most appropriate I thought.

Less of a fist in this case!