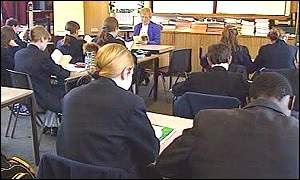 The Catholic Education Service has come in for criticism over saying that the spiritual needs of children of other faiths should be met, which sounds reasonable, even to the point setting aside rooms for their needs, or installing facilities for ritual washing.
Mac puts forward some interesting observations:

One child I taught in a Catholic school claimed he was a satanist. I was rather disbelieving at the time, but who can tell? And there is also the problem of where these rooms are to be found. At many schools, huts have had to be installed in order to provide sufficient accommodation for teaching, and chapel rooms often have to double up as classrooms.
The document said schools should ensure "pupils' health is attended to in times of fasting" - and canteens should take children's religious dietary requirements into account.
And yet, in Catholic school canteens around the country, there is often no provision of fish or other vegetarian options on Fridays (some people do maintain the idea of Friday abstinence) and meat is served on Ash Wednesday (when abstinence is still required by Church Law.)
But the real irritant is this last point: the guidance said "respectful understanding" should be shown to pupils of other faiths who are withdrawn from or remain silent during Christian worship."
At the same time, children whose parents wish to withdraw them from sex education classes are often subject to ridicule from both staff and students, and parents who choose not to allow their children to watch television for hours on end are pilloried for their unrealistic views in snide comments at teacher training sessions.

Even back in the mid-eighties, my father withdrew me from sex education and I was mercilessly pilloried by my peers. However, nobody attacked the Jehovah Witnesses for failing to attend religious assemblies, or for their refusal to be in the same room as a Christmas tree.

Here's a novel idea, how about instead of changing catholic schools into multi faith schools we make them truly catholic instead.

And here is the problem with what you seem to think is a reasonable idea Father, it sends the message that all faiths are equal which is false, there should no more be places set aside in catholic schools for false religions than there should be a Buddhist shrine in your church.

Catholic parents send their children to Catholic schools to learn the Catholic Faith not to be exposed to false religions which are harmful to the faith of children.

The introduction of such rooms would be the final nail in the coffin of the already failing catholic schools and would be yet another surrender to the enemies of God who are seeking constantly to undermine the Catholic Faith by presenting it as just another religion.

Students parents know before they choose to send their children to it that a school is catholic, if they don't like that they can send them to another school.

The Bishops need to follow Bishop O'Donoghue's lead and make our schools truly catholic not the anti-christian government who want to destroy the catholic identity by mixing it and diluting it with all the others faiths.

What nonsense, sadly from the CES!
Many Catholic Primary schools are unable to provide space for a chapel-are they supposed to give priority in their development plans for special facilities required by, for instance Moslems, Buddhists or Hindu's?

What VL is saying is exactly my point...this idea that all the Faiths are the same is heresy. There is no need for this attitude of acceptance, or political correctness. The government needs to get out of the Catholic School system....and the Catholic schools need to be well, Catholic in Faith, in practice. The schools that are growing are the ones that hold true to the Faith. Where's the oath against modernism when you need it?