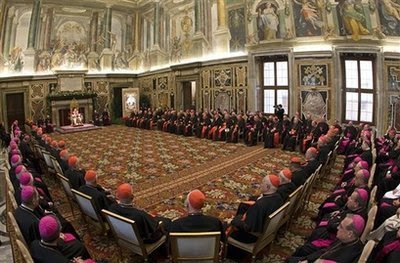 Sky News woke me this morning to ask me to do an interview on what the Pope had said to the members of the Curia. What I read yesterday seemed pretty innocuous, all about his travels this year, I told them to ring me back, after I had chance to re-read it.

"We need something like human ecology, meant in the right way. The Church speaks of human nature as 'man' or 'woman' and asks that this order is respected.
"This is not out-of-date metaphysics. It comes from the faith in the Creator and from listening to the language of creation, despising which would mean self-destruction for humans and therefore a destruction of the work itself of God."

....
"What is often expressed and signified with the word 'gender' leads to the human auto-emancipation from creation and from the Creator. The human being wants to make himself on his own and to decide always and exclusively by himself about what concerns him.
"But, in so doing, the human being lives against the truth and against the Spirit creator. Rain forests deserve, yes, our protection but the human being - as a creature which contains a message that is not in contradiction with his freedom but is the condition of his freedom - does not deserve it less."

I don't see a problem here, but then I am a Catholic. I think "gender" in Italian has a meaning comparable in England to "gay", with a culture and values of its own.
The is real problem in our contraceptive society, that seems to want to emasculate men, defeminise women and remove the procreative function from human relationships.
Fr Tim has a post on a document produced, I fear, by Catholic Education Service on homosexuality.
at December 23, 2008

Father, in my opinion, was wise not to agree to an interview.

The media have already put their own (very inaccurate) slant on what the Pope said.

Well, Father, I think that's exactly their point. They don't get the connection between sex and procreation. They want to separate the two.

PeterHWright is correct in what he says.
The Guardian.co.uk online newspaper has whipped up a real storm of frenzied secularist/homosexual/transgendered/humanist/viciously anti-Catholic and indeed quite hurtful attacks against our Holy Father. If you really want to see more here's the link: http://www.guardian.co.uk/world/2008/dec/23/pope-gender-sexuality

Father Ray,Why should you have to answer to these heathen.You have started something that has got them going.

We must keep aware,the secularists are all about.

SKY NEWS who do they think they are?

Do they rule the universe?

The Holy Father has only said what we have all been thinking but have not been allowed to express.

Sounded more to me like Sky News wanted some clarification from a known orthodox source, so I'd give them the benefit of the doubt on this one as to motive for asking!

Give them credit for recognizing a man who understands where the pope is coming from...which is more than you can say for the Guardian. [Why respectable parakeets would even tolerate it in their cages....]

A point of information, Father, if I may. It is surely not the CES in this instance which has produced the absurd document (posted by Fr Tim) misrepresenting the Catholic Church's attitudes towards homosexual inclinations and activity. I think it is the AQA: one of the exam boards that poor teachers have to suffer these days.

Those who equate any criticism of homosexuality ,or any suggestion that it is unfortunate ,with what they call "homophobia" and any forthright view with which they disagree as "bigoted", will of course find any expression of traditional Christian morality hostile.

Those of us who suffer from no phobias (irrational fears of something) and are not bigots( those who persist in a view when all the evidence is against it) must ask them to define their terms so that we can have a rational discussion.

Loving our fellow men and women does not mean that we should approve all their actions.