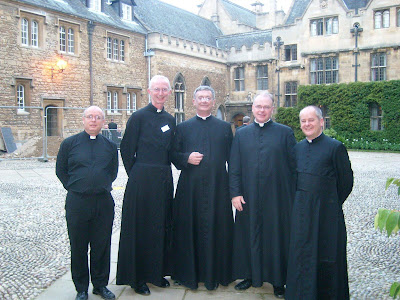 The following is a statement from Mr Paul Beardsmore, Secretary of the Latin Mass Society:

1. The LMS Committee has not cancelled the Oxford Training Conference, and Merton College has not indicated to the Society that permission to hold the Conference has been withdrawn.

2. Mr David Lloyd’s views concerning the Oxford Conference held in July 2008 were considered by the LMS Committee three months ago and did not receive the support of the majority of its members.

3. The LMS Committee – including Mr Lloyd – is unanimous in its commitment to the implementation of the Motu Proprio, ‘Summorum Pontificum’, and consequently to the training of clergy to celebrate Mass in the Extraordinary Form.

4. The leaking to the press of Mr Lloyd’s confidential e mail, and the attempt to link this e mail with the LMS Committee’s recent decision concerning the administrative arrangements for the Conference are mischievous.

It does seem rather clear from this statement that a conference is going ahead this year, probably at Merton, and that cost is an issue.

I think like most events which are organised by a committee details need to be clarified, I don't have too much of a problem understanding that there is a degree of confusion in planning an event that is eight months away. There is a bit of mischief and deliberate stirring afoot.

From other sources I understand "cost", or going over budget rather than "elitism" was actually an issue but not an insurmountable one.

Someone on DT has said that the Chaplain of Merton has refused use of the chapel.

The fact remains that certain unknown events and decisions have led to the 'withdrawal' of Revv. Drs. Reid and Hemming. Has 'academe' been offended by their treatment? Were their proposed fees too high? I thought they did it more or less voluntarily.

Whatever the truth, if published at all, it is really only the business of the LMS, the priests who faithfully support it, and its paying memberst. It shouldn't be raked over on 'Holy Smoke'.

The mischief caused by the person who leaked the email, is compounded by DT's treatment of the subject, which is potentially damaging to the Society's image.

Sometimes I wonder what that guy really wants.

I think we should be satisfied by this statement and move on. If there are other reasons that Drs Hemming and Reid pulled out (have they in fact ?), then perhaps they would like to comment ?

I too was sorry to see the issue raked over on Holy Smoke. Surely people who love the Extraordinary Rite face enough suspicion and misunderstanding? I know priests who clearly speak as though they haven't read the Motu Proprio.

This LMS statement begs more questions than it answers. Holy Smoke asks some pretty pertinent ones to this debate:

1. How does the LMS intend to hold its training conference at Merton College when the Chaplain of Merton has withdrawn his permission for the LMS to use the chapel as a direct consequence of the Committee’s recent sackings?

2. Does Mr Lloyd hold his views now? If they are not supported by the Committee, why has he not resigned?

3. Is it not true that at least one LMS Committee member has proposed that the Society ask Pope Benedict to rescind Summorum Pontificum’s permission for vernacular readings? If so, how can the committee be “unanimous” in its committment to the implementation of the Motu Proprio?

4. Will the LMS publish – at least to their membership – the minutes of its meeting on December 6th so that the true positions of each of its committee members and the reasons for its decisions can be known?

5. Why not retain the “winning team” of Wadsworth, Reid and Hemming and avoid all this division and scandal and have another “gold standard” training conference in 2009 like those of 2007/8, if the Committee does not share Lloyd’s views?

I'm not in the loop on this (I'm far from all interesting loops), but reading the account on Holy Smoke feels me with dismay. I don't know what Damian Thompson thinks he is likely to achieve, but he seems to be raking up controversy for its own sake. Just about every family, group, organisation, society, etc. has disagreements. They don't all need to be aired in public. There's a time and place for promoting one's own ideas and plans for action, but please let us not have this unseemly squabbling.

Whatever the ultimate outcome of this saga in respect of the Latin Mass Society, there is one lesson that we can at least all learn, i.e. that Holy Smoke should be placed on the Index Blogorum Prohibitorum. Not because it contains any heresy (although some of the fruitcakes who habitually commentate on it don't show much awareness of Catholic Doctrine), but because reading it is a proximate occasion of sins against charity. With friends like dear old Damian, who needs enemies!

Sadie, I could but somethings should not be shouted from the housetops.

My thoughts are this.

It is always wise to scrutinse carefully when one activity uses up a disproportionate amount of the budget and ask the question "should we be doing this"?

Dioceses spend a huge proportion of their budgets on the training of priests in the seminaries. Without priests the church withers. This may may shed some light on the issues posed by the first question.

If any organisation's committee always agreed on all important matters and did not, from time to time, have significant differences of opinion, then I would be a little concerned.

Quite, Paul. And the LMS has to find a new role which will take time.

Father, the Latin Mass Society's accounts for last year are in the public domain. From what I can see, cost should most certainly not be a concern. Mr David Lloyd's fears on this score were apparently laid to rest several months ago.

David Lloyd should be asked to attend a high Mass at the front and the thurifer should be placed as near as possible to him and put out as much smoke (Holy Smoke) as possible to make him cough. He is the one who is wrecking the LMS and caused trouble some back when there was a problem over an LMS rep who attended SSPX Masses

Father,
I would avoid too much Holy Smoke, if you want to save your soul.

I must agree with Fr. Clifton.

This is the same David Lloyd who persecuted Dr. Carol Byrne for merely having recourse to the SSPX, when the Diocese of Middlesbrough would not give permission to have a regular Sunday mass in the traditional rite.

This was in light of what Mgr. Pearl of the Ecclesia Dei commission said that people can fulfil their obligation on a Sunday at any SSPX chapel, provided they go solely for assisting at a Tridentine mass and nothing else.

I incorrectly quoted you in a post of two minutes ago so here goes again.

Your blog is a source of so many good things that I was sad to see you cautioning avoidance of 'too much Holy Smoke if [I] want to save [my] soul'. A multitude of things might be bad for the quest for salvation, but IMHO Holy Smoke is not among them.