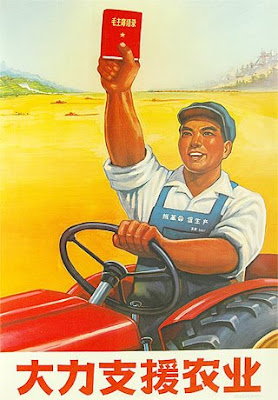 Cardinal Hume said – "it was always easier to deal with the loony Left than the conservative Right. He said they were always nicer people."
It is not useful here to deal with how the late Cardinal failed to deal with loonies.

Let's think about those on the "Left" generally. When I was at school I used to quote Mao's Little Red Book, he was certainly on the left but not very nice at all, then there was Stalin and Trotsky. Mmm! In an earlier age maybe Robspierre and the other French Revolutionaries, not very nice at all. In English history there was Cromwell and those odd groups like the Levellers and the Adamites. Earlier still those very strange Franciscan types who claimed Christ possessed nothing, who then set about dispossessing everyone of everything.

I don't think anyone would consider these to nice, as for the "loonies", well there was my great great ... uncle, somewhat removed uncle who was certainly left, and a loony, but well..., Cobbett maybe, though he was a dreadful manipulator of poor Queen Caroline. Tom Paine, what about his involvement in The Terror?

The trouble with loonies is they seem always disconnected, they leave nothing tangible, their visions always tend to be to smoke and mirrors, the nice one's offered a critique of society but nothing more. They questioned, produced a great deal of heat but did little else.

Maybe I am being unfair, but it strikes me that the "Left" actually has no "big idea". The politics of the "Left" today is arbitrary and controlling, rather than empowering, it robs people of freedoms. It starts with a vision of freedom but soon degrades into imprisonment.

The same with those left leaning theologians of the 1960/70s Schillebeeckx, Kung et al, they have value only in so far as the structures which they tried to overturn existed, when these change they become irrelevant, and for the most part forgotten, they are yesterday's men, they are sterile, impotent. Indeed their vision is generally uniquely personal and becomes a testimony to their own self promotion, they rejoice in being the destructive enfant terrible, who is amusing until he grows out of short trousers. Like the enfant terrible their cry is really, "me me me".

What about the "conservative right"?


I have grown to love them, especially the crabby hardliners. Generally they have come to their conservatism because they have dallied with the left and found it wanting, Joseph Ratzinger used to be considered quite dangerous at one time. They can be unpleasant because they consider they have something to defend that is of value. They complain, they scheme, they plot, they appeal to authority, they write letters, even blogs, because they believe in something. Why are there very few liberal Catholic blogs? They are stubborn and irritating, they are the type of people who are willing to suffer martyrdom (some of them). In the Church they are the people who tend roll up their sleeves and feed the hungry, clothe the naked etc. They hate tedious committee meetings that achieve nothing except create hot air. They are liberated from having to invent the wheel, it has already happened, they just have to defend the continued turning of wheels.

I agree, when there's something worth fighting for, it's always worth defending, martyrdom, bring it.

Maybe part of the difference is that the religious left, broadly speaking, has absorbed a dessicated version of Christianity into its ideology. It meets the old anxiety of salvation by bettering the world. So, what's the fuss over liturgy, except in so far as it make us better?

Cobbett may have been a leftie, but he does have one redeeming feature, i.e. sympathy for the position of Catholics, which was quite unusual for a Protestant in pre-Victorian England. His account of the English Reformation is "unashamedly pro-Catholic" and anticipates Duffy and the other revisionists by nearly 170 years.

It is available on line or from Tan Books.

What I have found is that those on the left do a very good impression of nice, but it very rarely lasts past the first disagreement you have with them.

I guess what I am saying is that I have found their niceness to be a sham which they employ as a means of trying to gain an advantage.

It is similar to what you observe in psychopaths, they often have a superficial charm and tend to be good at manipulating people and the left are like this to. Remember Father people like Mao and Stalin were loved by many, they could do nice when it suited them to.

This is why it is so important to not not allow emotion to effect your judgement, emotions are to easily manipulated and the science of manipulation has reached its pinnacle in our day.

This reminds me of one of the spiritual works of mercy: we are to admonish the sinner.

Telling someone "it's a sin" is beyond the pale for the liberal left. It's not a very nice thing to do.

However, it is a very kind thing to do. There is a difference between being nice and being kind.

Yes, I remember Carinal Hume saying this, but I am not sure what he meant by "deal with".

I don't mean my comment to narrow the scope of Father's post, but I am speaking here of people on "the left" and "the right" in the Church today.

In this case, I wonder what is meant by "deal with" : discuss, dispute, contradict, or what ? If a person is that far on the left, then discussion would (presumably) be unfruitful.

As to people on the far right, if they are right, then why do they need to be "dealt with" ? You can't refute their religious beliefs, because they are correct. You can only condemn their hardness of heart (if they are hard hearted).

Yes, of course conservative Catholics should be nice, and many are, in spite of forty years of abuse and ridicule and ostracism.

But the lunatic fringes on either side will always be, well, loony.

Dear Father, Your reflections on the loony left are interesting, but the left have no monopoly on political monsters. I notice that Hitler, Pinoche, Mussolini and Amin were absent from your list; monsters all but certainly not leftist. Unfortunately, madness afflicts both the right and left wings of the political spectrum; communism and fascism are simply different expressions of totalitarianism, and both (as you know) have been condemned in papal writings.

The loonie religious left can lose sight of what is truly precious, and sometimes seem to want all Christians to morph into some banal Church, without any teaching that challenges us to live as followers of Christ. We cannot walk this path, for Christ's call involves not only joy and togetherness but self-sacrifice and struggle.

Yet, those on the religious right can sometimes be arrogant to the point of believing they are God's anointed, and that any way othee than their own leads to perdition. I would hope you have been spared the trauma of dealing with those from the US who are members of the religious right. We Catholics are called idolators, supporters of child molestation, fake Christians, and blamed for a myriad evils that would take pages to describe; this is without even mentioning what is said about the Eucharist by some tele-evangelists. The US religious right is neither of the two.

I must also lovingly disagree with the implication that the conservative right are the only ones who roll up their sleeves and feed the hungry; this is possibly an opinion based upon the splendid work of your own parish, but there are 'lefty' parishes doing the same, and you are too knowledgeable a person to deny this fact.

Personally, I believe that we need the vision of those who dream (and they do tend to be lefties) but it has to be balanced by the groundedness of those of us who are of a more conservative (small c intended)disposition.

I shall be rather engaged for the next week or so, and thus unable to make comments on the blogs of others; but may I wish every possible blessing upon you and the people of your parish during this Christmas Season?. It seems to me that you are a man with a truly loving heart, and that is what people need in one who is their shepherd. Venite adoremus, Dominum.

I am being partisan hence I left Hitler etc. out but on the whole I prefer people with opinions to those without.
Though people are people.

Hitler was a socialist ;)

The Loony Right take some beating,that LOONY who came to power in '79 can be held responsible for most of the trouble we have now.

Dereck Hatton of Liverpool was a well known member of the "loony left"but he just filled his boots and went the other way,another one was David Blunkett.

The whole lot of them are loony or is it just acting the goat.

The trouble is that we put up with them.

Both Mussolini & Hitler were big government socialists. If you want small goverment conservatives then I would look to Calvin Coolidge and Warren Harding from 1920's America.

Having children moved me to the right. So did reading Orwell, Burke, Scruton, Dalrymple and Chesterton. Working for a living with some of the poorest people in the UK also helped.

Within the Church those who, for all their faults accept the Magisterium and the teaching of the Church and try to live it, even though they acknowledge their shortcomings, seem to be labelled rightwing.Others who can but accept partially the Teaching of the Church, possibly owing to poor formation and catechesis, are often seen as leftwing.I think there are nice and nasty folk on both sides, but the really difficult ones are those who try to suppress or silence Catholic teaching, even within Catholic circles, presumably because it may not fit with the agenda or spirit of the day.

The religious left merely echoes the concerns and ideas of the secular elite and gives them a religious flavour and attempt at legitimation, the left still yearns for the period before the Council, still believes that "error has no rights", and is not happy with religious liberty or ecumenism. In politics both extremes believe in big government and both have much blood on their hands. Monsters like Stalin, Hitler, Pol Pot and Mao are alike in their totalitarianism. Until Hitler broke it the Nazi-Soviet Pact was a very friendly affair. Most of us in political terms move from left to right as we grow up and assume responsibilities,for example I am no longer the earnest young Marxist I was in my teens. However I have met decent, honourable, and pleasant people of most political persuasions.

But Christmas is near, and I for one am grateful that I found this interesting and informative blog during the past year. Thank you Fr Blake. Happy Christmas.

When I grew up in South Wales in the '70s the roots of Labour were still to be seen, the Church and Chapel working communities determined to educate their Children and to better themselves. There were giant among men then. As Fr. says, better people that believe things than todays professional politicians.