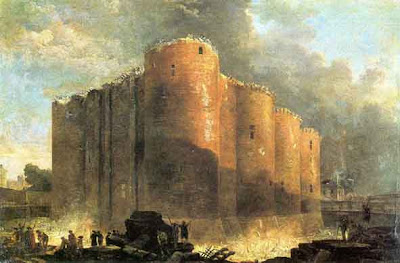 Inspired by the American revolution, came that of the French. Revolution begets revolution. Violence and usurpation begets violence and usurpation. Lawlessness begets lawlessness.
The ancient regime with all its injustices was supplant by the rule of a group of bandits who sought to overthrow everything, the injustices of the Revolutionaries made pale all that had gone before.
The Revolution brought forth the rule of the mob, the ascension of relatavism and the overthrow of God. In the name of liberty, equality and brotherhood a little boy, the Dauphin was depraved and abused, Leon destroyed, its citizens slaughtered, the Vendee devastated its people massacred, whole areas of the country devasted, so many thousands massacred. Here was killing on a mechanised industrial scale, the guillotine, the killing fields, were the chained were bombarded by artilliary, the innocent in chains, here is an object lesson for the mass murderers of the twentieth century.
Long live the Revolution, in the minds of all men, as reminder of the wickedness of the human heart when it seeks to be released from the experience of history.
at July 14, 2009

Well said Father Ray,the Atheist Secularists will have us all eating each other.

Let us also remember the Carmelite Martyrs of Compiègne who were guillotined during Robespierre's Reign of Terror and went to their deaths singing the 'Salve Regina'. Their feast day is this coming Friday, the seventeenth of July.

"We do not draw the moral lessons we might from history. On the contrary, without care it may be used to vitiate our minds and to destroy our happiness. In history a great volume is unrolled for our instruction, drawing the materials of future wisdom from the past errors and infirmities of mankind. It may, in the perversion, serve for a magazine furnishing offensive and defensive weapons for parties in church and state, and supplying the means of keeping alive or reviving dissensions and animosities, and adding fuel to civil fury. History consists for the greater part of the miseries brought upon the world by pride, ambition, avarice, revenge, lust, sedition, hypocrisy, ungoverned zeal, and all the train of disorderly appetites which shake the public with the same

These vices are the causes of those storms. Religion, morals, laws, prerogatives, privileges, liberties, rights of men are the pretexts. The pretexts are always found in some specious appearance of a real good. You would not secure men from tyranny and sedition by rooting out of the mind the principles to which these fraudulent pretexts apply? If you did, you would root out everything that is valuable in the human breast. As these are the pretexts, so the ordinary actors and instruments in great public evils are kings, priests, magistrates, senates, parliaments, national assemblies, judges, and captains. You would not cure the evil by resolving that there should be no more monarchs, nor ministers of state, nor of the gospel; no interpreters of law; no general officers; no public councils. You might change the names. The things in some shape must remain. A certain quantum of power must always exist in the community in some hands and under some appellation. Wise men will apply their remedies to vices, not to names; to the causes of evil which are permanent, not to the occasional organs by which they act, and the transitory modes in which they appear. Otherwise you will be wise historically, a fool in practice. Seldom have two ages the same fashion in their pretexts and the same modes of mischief. Wickedness is a little more inventive. Whilst you are discussing fashion, the fashion is gone by. The very same vice assumes a new body. The spirit transmigrates, and, far from losing its principle of life by the change of its appearance, it is renovated in its new organs with a fresh vigor of a juvenile activity. It walks abroad, it continues its ravages, whilst you are gibbeting the carcass or demolishing the tomb. You are terrifying yourselves with ghosts and apparitions, whilst your house is the haunt of robbers. It is thus with all those who, attending only to the shell and husk of history, think they are waging war with intolerance, pride, and cruelty, whilst, under color of abhorring the ill principles of antiquated parties, they are authorizing and feeding the same odious vices in different factions, and perhaps in worse."

You were right the first time, Father.

Marianne, far from being the Goddess of Reason is a source of confusion!

There were fundamental differences for the revolutions. The American Revolutionaries saw their rights as those rights "Endowed by their Creator" the French did not.

And therein lies the difference.

Oh, and note what trigger the American revolution was the Regular's attempt to seize arms stores from the colonials.


A government trying to disarm its people doesn't fly well over here.

The American was a war of independence not a revolution in the same sense as the French, note the Americans never had as their aim the destruction of the monarchy unlike the French.

One was a war of independence while another was a coup, these are different things.

Would just like to add, you forgot to mention the mother of all these revolutions in Christendom, the protestant Revolution.

Yet it was England which had its own revolution in the 17th Century, which cut off its King's head and set the pattern for the events both in the American colonies and in France. WE were the original regicides,and the behaviour of our revolutionaries served as a pattern for the Americans who persecuted the Loyalists and for the French in La Vende. Cromwell in Ireland is remembered to this day.

As regards Loyalists -- granted you had some tarred and feathered and ridden out of town on a rail, but by and large that was for an obnoxious minority -- but nothing near approaching the guillotine!

Gem - The Canadians might wish to dispute whether some of their ancestors were part of "an obnoxious minority" or merely conservatives wishing to keep to their traditional allegiance.

The American War of Independence was a bunch of Expats who did not want to pay TAXES to the Government.

Nothing has changed in that respect and we invariably give them Knighthoods for being such cleverdicks.

What about the subsequent wars that raged in Europe almost continuously until the Battle of Waterloo in 1815? Thpse killed in these wars have to be added to the death toll. And while we are at it, we could ponder whether the rise of Germany as a military power was also another of the consequences.