More oppression of Catholics in Vietnam 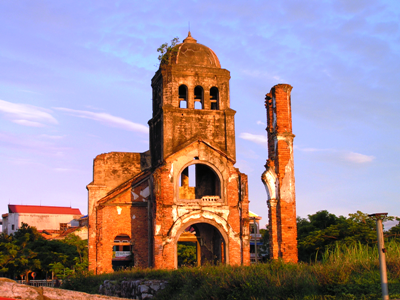 All that remains of the historic church of Tam Toa (pictured), built at the end of 1800 and hit by American bombing in 1968, has become grounds for confrontation between Catholics and the government. Yesterday, police charged and beat hundreds of Catholics from the Diocese of Vinh (334 km south of Hanoi), who had erected a cross and an altar on the grounds of the church.

"The Police - tells father Thanh Hong, pastor of the parish - launched tear gas bombs on people, before kicking and beating them with sticks and stun guns. Many priests and faithful were injured”. "Some – he adds - were forced to lie on the ground, where they were again beaten by groups of young thugs hired by the police. Dozens more were loaded onto police vans and we still do not know where they have been brought”.
read more
at July 22, 2009

I take my freedom to worship,for granted. I have no idea how I would be in this situation these poor folks are in. I wonder if I would stay faithful.
As I heard said years ago,if Christianity became an imprisonable offense in this country,would there be enough evidence to convict you?
I was feeling pretty pleased with myself spiritually today,until I read this.
My perception of God is still so 'self' based.Forgive me,Lord.

Thank you, Walter Cronkite. < / sarc My ex-Vietnamese Catholic co-workers send their thanks to hell for you too!>

Is there no end to the persecution of our Precious Catholic Church.
God protect these brave people who have the courage to stand up against the evil one, there reward will not be in this life.
More martyrs in the making.
How lucky we are to practise our Faith in such safety.

shadowlands - none of us know how we would feel or act in these appalling situations. Let's just take comfort from the lives of the Saints and especially the Holy Martyrs.

These were by and large ordinary folk who did ordinary things extraordinarily well! When the going got tough they just kept on going, placing all their trust entirely into the hands of God who then used them for the greater good. Just think of our Church without any Saints or Martyrs - impossible!

No point beating ourselves up about what we might or might not do. The BIG question is this - WHAT CAN I DO NOW?

How can we help our Catholic Brothers and Sisters in Vietnam - Prayer most definitely helps - writing to MP's, Government officials, Vietnamese Embassy etc... will bring a focus on these issues, negative publicity that Vietnam does not need as it tries to catch up with world tourism, commerce etc...

The Vietnamese Government are preserving the ruins as evidence of WAR CRIMES by the Americans.

It is not persecution of the Catholic Church but punishment of people contravening planning regulations.

Nickbris - Come on over here to VN & get acquainted with the facts firsthand.