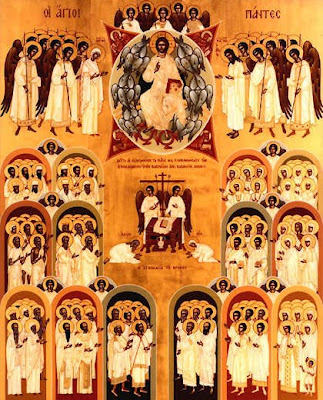 I have saints in my parish, people of outstanding holiness, people in who's presence the goodness of God shines through.
The problem is that they are not plaster saints but real human beings, flesh and blood creatures, often with deep "problems" in their lives. One or two have a natural innocence, which could be seen as naivety. The majority are the men and women struggling with their sexuality, or their mental health, or guilt about some great sin in their pasts, there is a woundedness about them, a consciousness of their own unworthiness of God's love. A common factor is that they trust in God, they cling to him like a man cast adrift in boiling sea clings to a piece of driftwood. They live out St Paul's words, "My Grace is enough for you", despite the wounds, despite the hurt in their soul.
Fr Mark has the following:

Beautiful reflexion on GOD's Love for us, I really like it thank you Fr. Ray.

In the (NO) gospel yesterday, St Paul referred to a "thorn in the flesh", and goes on to say the God is most powerful when we are helpless (I paraphrase). That has always been my experience with my own thorns in the flesh - past and ongoing, and your post inspires me to keep others who are suffering in my prayers.

I have never thought about this before. It really is a magnificent sign of God's love for all human beings. This was a great thing for me to see and it really brightened my day. Thank you!

Thank you Father that is beautiful.
I was told that we are not completely perfect (none of us) but God uses that part of us that is perfect for a reason to do His work and that is only known to Him.
I'm not sure I am making myself clear but it helps explain how those that society rejects with deep 'problems' are so precious to all around.
We should all try to live by the fact that "My Grace is enough for you" I think that really shows were our dependence should lie.

Perhaps the mission itself is part of the cure.