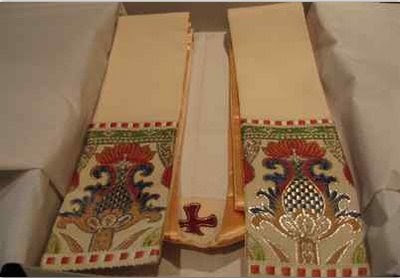 In a previous age the idea of an Emperor investing a Pope with a stole, the sign of priestly authority would be taken as definite sign of the subjection of the Church to the secular authority.

Obama's Liberal Catholics do not understand signs and symbols.

Today President Obama will give a stole to the Pope which was for awhile placed on the relics of St John Neuman.

During President Barack Obama’s July 10 meeting with Pope Benedict XVI, he will present the pope with a stole that was placed on the remains of St. John Neumann.

“It’s a delight that something of one of our Redemptorist saints would be given to our Holy Father,” said Father Patrick Woods, provincial of the Redemptorists’ Baltimore province, which is headquartered in Brooklyn, N.Y. “We’re delighted as Americans that our president is visiting the Holy Father and delighted that something belonging to our province would be given to him.”

Father Woods said in a statement that the stole was an appropriate gift because it symbolizes the priesthood that was “at the heart of St. John Neumann’s life as a Redemptorist.” He also said the stole, placed on the saint who had worked extensively with immigrants, was symbolic of the new wave of immigration in the United States and the Redemptorists’ continued service to these groups.

A stole is a long, narrow strip of cloth, draped over the neck and falling to about the knees, worn by a priest or bishop when celebrating Mass or presiding at other liturgical ceremonies.

Louis DiCocco, president of St. Jude Liturgical Arts Studio, an architecture and design firm based in Pennsylvania that specializes in building and restoring churches, was instrumental in obtaining the stole for the president, according to the Redemptorists.

His firm designed and built a chair used by Pope Benedict at the Basilica of the National Shrine of the Immaculate Conception in Washington during his visit in April 2008.

DiCocco was approached by the Obama administration about a possible gift for the pope.

“They wanted to find an antique chalice, but I suggested it was important to get something more personable,” DiCocco said in a statement. “I told them about this stole that was something that belonged to an immigrant who was so instrumental in serving immigrants and building Catholic schools. What better than the stole that represents the priest?”

What's the old saying? Ah, yes, 'Beware of Geeks bringing gifts' or something like that.


Alternatively 'Never look a gift horse in the mouth'.

In the time of Charlemagne ,Church and State were very close together so that Alcuin, the Emperor's Minister, reformed the Missal ,and I believe it is said , although how true the story is I do not know,that on Christmas Day, vested as a Deacon, the Emperor sang the Gospel.

However Chuch and State then shared a common belief, unlike Benedict and Obama.

The press article forgets to mention that the pope will undoubtedly have a "first class relic" of a fingernail clipping from Barry Soetero's middle finger.

Maybe Micelle will give him a DVD of "If It's Tuesday, It Must Be Belgium."

Emperors/kings often performed some kind of diaconal function modeled on the Byzantine Emperor.
Our Queen's coronation robes are modeled on ecclesiastical vestments.

Indeed. Looking at the DVD 'A Queen is Crowned' our Sovereign Lady The Queen can be seen to be vested in a stole; not placed diaconally but in the priestly fashion. Interestingly the commentator (Laurence Olivier) doesn't mention it at all.

Crux, the pope was looking at the other end of this particular horse.

Not to mention that the stole in question is a mass-produced CM Almy product.

Are they thistles? Ah well at least it's not polyester.. is it?????

What mean-spirited comments. They make me ashamed

"an Emperor investing a Pope with a stole ... a sign of the subjection of the Church to the secular authority"

Tom, 0ero deserves every one of them. He knew exactly what he was doing when he spoke at Notre Shame and insisted on "Christian symbols" being covered up in the Georgetown chapel.

I must say though, that in general although I do not like the Vatican protocol of having the women dress all in widow weeds the "Widow Obama" look quite suits HER.

President Obama is trying to fulfil his promises of the whole campaign.

The other lot have made such a mess that it is going to be extremely tough going.

He seems to be doing a good job.Peace and reconciliation are the most important,alleviation of hunger in the world especially Africa may get started.

Tom, I could not agree more with your statement. Christ must weep at the lack of charity in the hearts of some Catholics.

Goto,
There was no charity at all in you last comment.

Fr. Blake. No, I have no charity where zero is concerned. The best thing he can do is to leave. On a permanent basis!! It would be a start to economic recovery for one thing. This man will damage us, and the world, for decades.

By reading some of these comments we can see where so-called DEMOCRACY especially in some parts of USA is a complete waste of time.The LOSERS will never accept the result.If there was a 100% turnout the minority would never accept the result,there will always be a massive 5th Column who are only out to frustrate the wishes of the Victors.

We have seen this all over the World especially in places like Zimbabwe,Iran,Palestine,Venezuela.If we don't like them then their electoral system must be crooked.

One should always be charitable.

It is a pity that little is being shown by President Obama to the millions killed by abortion and infanticide supported and funded by this the American taxpayer.

The biggest scandal are the "Catholic" politicians who support these policies ...