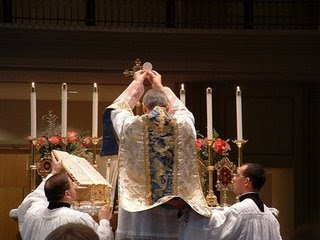 As a young Protestant child taught "Divinity", as my school pretentiously called "RE", by a Methodist minister, I was taught that one of the main differences between the Protestant communion service and that "Romish fable" the Mass was the elevation. We weren't taught in a bitter polemical way but merely presented with historical facts. Indeed, I became intrigued by the tremendously high, and difficult to comprehend Catholic notion of transubstantiation.
So, the first time I went to Mass I was fascinated by the elevation and what it signified: notions of being "lifted up", being "between heaven and earth"; ideas of the exaltion on the Cross or Ascension, the lowering of the host too evoked ideas of Incarnation, kinosis, descent into hell. I remember being a little shocked by reading the rubric in the GIRM, which merely said, "the priest shows the host to the people". What was the cause of so much division between Catholic and Protestant for centuries, seemed to be about merely saying "look". All that talk about the "gaze that saves", those recussant cries at illegal, secret Masses of "hold, sir priest" became reduced to a merely practical showing of the consecrated elements.
Obviously any reading of the connection between the "elevation" and "Corpus Christi" devotion would indicate our forefathers understood a deeper connection, the Protestant hatred and elimination of the "elevation" too, indicates more than a utilitarian presentation for viewing.
The Bugnini rubric allows a great deal of interpretation of "shows the people", from the casual one-handed elevation, an elevation just a few inches above the corporal, the elevation of the pale host against the equally pale face of the celebrant, so actually nothing is seen, to the abrogation by simple priests of the papal prerogative of elevation to the cardinal points of the compass.
Pope Benedict has spoken a lot about the ars celebrandi, it will be interesting to see what he does with his broken wrist. As with the Reformation period, nothing seems to indicate what a priest understands by the Real Presence than the way in which he elevates the Body and Blood.
at July 26, 2009

It was nice to see a concelebrated elevation today at Mass..

Surely the point about the host and, subsequently, the chalice being elevated was precisely that they be shown and thus seen and worshipped as soon as they were in fact Christ our Lord substantially present. Protestants would naturally be outraged at the worship of what they claimed to a mere symbol. When mass is celebrated facing the people there is no real need for the priest to raise the blessed Sacrament above his head.

There's nothing shocking about the GIRM instruction, because implicit in the instruction is precisely so people CAN see *AND ADORE*.

Jungmann's "The Mass of the Roman Rite" covers the elevations very nicely. It wasn't a custom until the 12th century.

Here is what it says: "A religious movement swept over the faithful, prompting them, now that they hardly presumed to receive Communion, at least to look at the sacred species with their bodily eyes. This impulse to see fastened upon the precise moment when the priest picked up the host and blessed it, as he was about to pronounce over it the words of consecration. The presentation of the Host by elevating it a little, which we find more clearly expressed in the oriental rites, had also become more pronounced in the Roman Mass. Toward the end of the twelfth century stories were in circulation of visions imparted at this very moment: the Host shone like the sun, a tiny child appeared in the priest's hands as he was about to bless the Host.

In some places the priest was accustomed to replace the host upon the altar after making the sign of the cross over it, and only then to recite the words of consecration; in other places, on the contrary, he would hold it aloft as he spoke these words. Thus the people were not to be blamed if, without making any further distinction, they reverenced the host as soon as they were able to see it.

To forestall this impropriety, the bishop of Paris, in 1210 ordered that the priests should hold the Host brest-high, before the consecration, and only after the consecration should they lift it high enough to be seen by all. This is the first authentic instance of that elevation of the Host which is so familiar to us.

The custom spread rapidly. The regulation of the year 1210 appears to have prescribed it for the Cistercians; for the Carthusians it was ordered in 1222. From then until the middle of the century it was mentioned in various synods as a usage already in vogue. At the same time and on till the 14t and 15th centuries, other synods contineud in various was to oppose any elevation before the consecration, "lest" (as a London synod of 1215 put it) "a creature be adored instead of the Creator." The great theologians of Scholatisicm speak of the elevation of the Host as a general practise of the Church.

But that does not mean that there was a similar elevation of the chalice. The elevation of the chalice is found, indeed, even as early as the 13th century, but the usage was rare and exceptional. However, it forced its way through, but only slowly, especially outside France. Even the printed Roman Missals of 1500, 1507, and 1526 make no metion of it. Various difficulties stood in teh way of the rapid spread of the rite, especially the danger of spilling the contents of the chalice. Then there was the fact that the chalice used to be covered with the back part of the corporal folded up over it. BUt particularly cogent was the objection that in seeing the chalice one does not "see" the Precious Blood. For this last reason even where the elevation of the chalice took place, it was little more than a a mere suggestion: The chalice was merely lifeted up to about the level of the eyes. Not till the Missal of Pius V was the 2nd elevation made to correspond with that of the Host."

Now, for me, this "innovation" of the elevations for the people is one I like. I wonder if there were traddies then whining and moaning about it.

BTW, I don't know where you're coming from, Patricius. Remind me at what point the people would SEE the consecrated host for the first time at Mass? WHERE has that Host been? Oh. Right. On the paten. Where the people can't see it.

And Fr. Blake, Jungmann even mentions that in a lot of places there used to be a dark curtain placed behind the altar and just prior to the elevation the curtain would be closed so that the Host showed up better!

I imagine the Holy Father will make due, unless he is a complete klutz with his left hand.

Oh, and *ignore* Bugnini. People like that deserve to be ignored!!! :-D

There is of course still no elevation of the chalice in the Carthusian Rite.

During the first millenium it would appear that the Host was not elevated.The custom spread from Paris at the end of the 11th Century, when the Bishop of Paris made it obligatory to elevate after the words "hoc est enim Corpus meum". He did this to settle a dispute as to whether the Host was consecrated at that point or only after the words over the chalice. The Pope at the time, Innocent III declined to offer an opinion.

In England Cranmer abolished it in his First Prayer Book of 1549 because he thought it implied the doctrine of the Real Presence.

Both your Methodist instructor , Father, and Cranmer seem to have been unaware that the Church did without it for over a thousand years during which time the doctrine of the Presence was almost universal.

But Father, the genuflection, per se wouldn't have anything to do with it. But I think the completion of the words "This is my body" pretty much does it!! The genuflection and elevation are mere acknowledgements of what has taken place.

BTW, I did like your allegories. I think the allegory tends to come after the practical, however.

I still would like to know what was the reason for the subdeacon holding up the paten at the high Mass I can't imagine a priest saying "Hey, Johnny [subdeacon] I've got a great idea, why don't you stand behind the deacon today and hold the paten in the humeral veil in a really fatiquing way in front of your face all through the consecration."

Priest: "I'm punishing you for staying out late last night. Let's just say it's to show the Jews hiding their face or something. I'll come up with that later!"

Gem, I think I am "coming from" precisely the same place as your second sentence.

"It is true that this mediaeval ceremeony of the elevation has teneded to become an new centre of gravity for the Mass. It is possible to exaggerate its importance. A rite unknown till the XIIth century cannot be of first importance in any liturgy. We must teach our people that the essence of the Mass is not the elevation, but consecration and communion." Adrian Fortescue, 'The Mass', 1914, p.345

The elevation(s) after the Words of Institution are the most recent in terms of historical development compared with the three others that can be traced in various rites. An excellent study (now available in facsimile form) is Drury, T.W., 'Elevation in the Eucharist: Its History and Rationale', CUP, 1907 - republished by Kessinger.