Pope on Caritas in Veritate 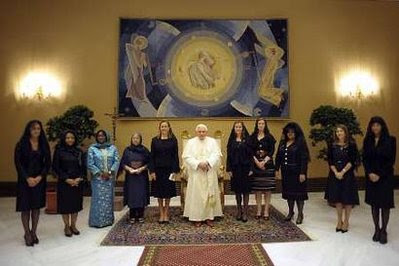 Speaking at the General Audience today the Holy Father said:

Caritas in Veritate, he said, "is inspired in its vision by passage from the Letter of Saint Paul to the Ephesians, which talks about" acting according to truth in charity. " "Truth in charity is the main driving force for every person and for all humanity" and is the foundation around which " the entire social teaching of the Church rotates ", because it is the only way in which "you can achieve the goals of a humanizing development”. The encyclical, he stressed, "immediately recalls two fundamental criteria: justice and the common good. Justice is an integral part of “that love in action and in truth that we are called to by the apostle John”, "loving someone means devotion to his being". "We love our neighbours so much more effectively when we work towards the common good”, which is the "charity towards others", to which every Christian is called.

Afterwards he met the wives of those attending the G8 Summit who meet in L'Aquilla this week, amongst those in attendance was Sarah Brown.
at July 08, 2009

The Vatican really needs to update its dress code for women. They usually look like some 19th century Sicilian widow. And what's with the Mantilla thing? THey're not even in Church.

The men get to look "normal" the average Vatican visiting woman in the diplomatic corps, and heads of state wives look like hell.

I don't agree with Gem's view here. It isn't the dress code but the women. Some years ago I saw a photo of HM Queen Elizabeth II on a visit to the Vatican decked out in black looking every inch a queen such as I have never seen her look at home.

Oh no! Can he not come up with another way of saying, 'the common good'?

We must ban utilitarianism...even just for the sake of the, err...common good...

Patricius, I thought the widow's weeds DID make her Britiannic Majesty look dowdy. And she almost always looks really good. She'd probably still manage to look regal in a swimsuit.

It's got to be DEPRESSING having to dress in togs like that in the summer, especially.

I rather liked that "way out" hat the woman wore from Brazil that Fr. Ray had on his blog a while back. OVer the top, to be sure, but OH, so refreshing!

Agree with Laurence. "The common good" sounds like code for "Let's find another way to stick it to the taxpayer and try and make him feel selfish and guilty."

Doesn't play in the best of times, much less in a down economy.

Last week "Gay" Pride, this week the Vatican. Sarah gets around, doesn't she?

Crux: Perhaps I spoke too hastily. Perhaps Madame Blaire and Madame 0ero would look better in sackcloth AND ashes. And better yet on their bare knees ascending a holy mountain begging pardon for their sins!

Goto, perhaps we should all be doing that.