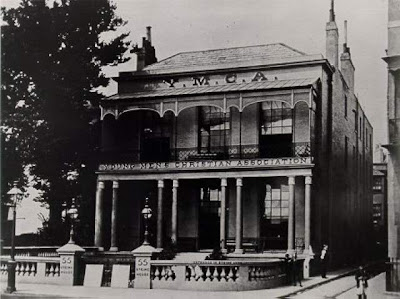 The Bones reports that the YMCA in Brighton was set on fire making 60+ people homeless. The house which is on the edge of this parish on the Steine has an interesting history, it belonged to Maria Fitzherbert and was the first place Mass was celebrated consistantly in Brighton since the Reformation, there was a small chapel in the house.

Even so this house along with the nearby Royal Pavillion are responsible for Brighton's reputation as a place of unconventional living.

It was Brighton that Charles II after being handed on from family to family along the Catholic underground negotiated his passage to exile in France. It was the last little town along the coast before the more heavily watched harbour at Shoreham, and it was most probably here that many of the recusant priests landed from ships bound for Shoreham. Where people were smuggled so were goods, like many Sussex towns there was a tendency to make up ones own laws. It is interesting that Tom Payne the French revolutionary and American rebel was actually a revenue officer in nearby Lewes, the County Town of Sussex, this part of Sussex was capable of discretion and turning a blind eye.

The Prince Regent gentrified Brighton but it was really to live with, or rather close to Maria Fitzherbert, who was known as the Prince's mistress. However, there is pretty good evidence that they were actually married, the marriage was secret, she was a good Catholic girl, but the appearance was that he was his mistress. This "appearance" of unconventionality in their relationship gave rise to a loosening of morality amongst the Regency Court. Contact with Brighton leads Jane Austin's Lydia to downfall. Brighton was a place for the mistresses and for unconventional living, it was Brighton (well ultimately Hove actually) that led to Parnell's downfall in the arms of Kitty O'Shea. With the coming of the London-Brighton railway Brighton became the place for keeping mistresses, many of the grander houses have access to gardens through narrow discreet alley ways.
By the end of the 19th prostitution seems to have become almost an industry second to tourism, many cheap hotels and boarding house hired rooms by the hour, with clean sheets extra. In the 20th century increasingly the town became the home of many people involved in the entertainment world, whose lives off stage brought as much entertainment in the yellow press as did their on stage antics. Along with this, the contrast of wealth and poverty gave rise to an under current of crime and violence that we see in Brighton Rock.
at July 09, 2009

Pedantic point, but Lydia, not Lizzy in P&P.

Lovely post - but I am surprised Mrs Elizabeth Darcy's lawyers have not yet contacted you to serve a writ for libel. It was her 15 year old spoilt sister Lydia, who succumbed to the heady charms of Regency Brighton and eloped with the dastardly Wickham! (Although it nearly ruined Lizzie's chance of happiness with Darcy, it was actually a great way of getting them back together).

As to the lovely Mrs Fitzherbert - George IV's poor put-upon official wife, Caroline had the final word. When she found she was facing trial for adultery, she replied "I have never committed adultery but once, and that was with the husband of Mrs Fitzherbert". All the royal files of the time have remained shut - well over the hundred year rule.......Given that no legitimate descendent of George IV and Caroline survives to be disinherited (and given that the fitzherbert marriage was illegal and void ab initio under the Royal Marriages Act, so no progeny could succeed to the throne)- it shows that there is still some sensitivity in Royal circles to anything involving papistry.

So, as well as being somewhat portly, George IV was bigamous!

From The Balnea (1801) by George Sackville Carey

"T'other morn as my Lady Fal-lal was a tea,
Just after she'd pickl'd herself in the sea
She gap'd and she yawn'd, and said it was strange
That the sea should have wrought such a wonderful change;
She went to the glass her grey tresses to plume,
Then smil'd on herself and she fancy'd a bloom.
Lord Saunter was there, like herself, in decay,
Who came down to wash his ill humour away.
Pray my good Lord, said my lady Fal-lal,
Don't you think this heav'n compar'd to Pall Mall?
What tho' there's no bush, or a tree to be seen,
Yet there is that pretty sweet level the Stein.
'Tis a terrible town. said my Lord, you'll agree;-
But then, said my lady-my Lord, there's the sea,-
My Lord now reply'd in a jocular strain,
I don't think I ever shall sea it again.

Have you thought about working for the Brighton and Hove Tourist Board?

Maria Fitzherbert is buried in St John the Baptist church in Brighton.

What evilness to deliberately endanger lives and put these people out of a safe place to live.
Thanks for the lesson in why Brighton is the "sister city" in morals of San Francisico. I knew about George IV and "Mrs. Fitzherbert" but not all the rest of it.

This was quite an interesting piece. We used to go to Brighton as children on holiday and it always held a fascination for us with the two piers it had then and the brightly lit Pavilion and fountains in the evening. Later I lived there in my early 20s before the gay communities had really taken a hold on the place. The first Body Shop was there I think when you could take your containers back to be refilled - a novel idea then and also it was where the first vegetarian restaurants started to be known.

Please spell the enemy correctly - Tom Paine, the author of "The Rights of Man" and "The Age of Reason".

What an interesting history lesson! I love the connection to Pride and Prejudice and wonder what other allusions an Austen reader who didn't grow up in England would have missed completely.