Mass before the relic of the Martyrs of Compiegne 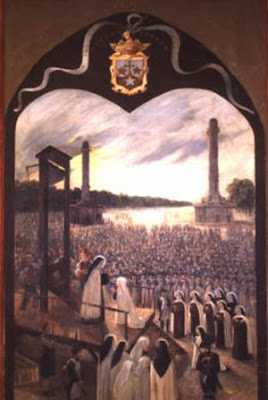 Andrew our EF Master of Ceremonies suggests we celebrate the Martyrs of Compiegne whose feastday is today, we have a 2nd class relic of the veil of one of them in the base of a rather beautiful crucifix we will use at Mass. 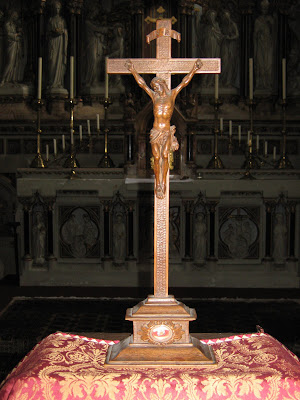 These martyrs were Carmelite nuns who were guillotined by the Jacobins during the Terror, they went to there deaths rejoicing, singing God's praises.
There is a record of the Prince Regent entertaining refugee Carmelite nuns to dinner at the Ship Hotel in Brighton during The Terror, where they actually stayed I have never discovered, during that time Brighton was awash with emigre priests and religious 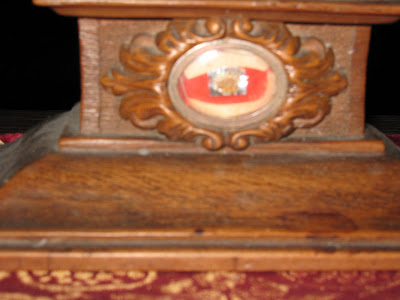 Is there a proper collect for these martyrs? I'm also interested in collecting new collects.

Where does the Scarlet Pimpernel fit into this?

Carl,
We are using virgin martyrs.

The bravery and sheer indifference to the things of this world even their own deaths amazes me. This can only come through a total abandonment to God, total trust in Him and unconditional love for Him.

If we could have but a single drop of their Faith today ......

Holy Martyrs of Compiegne pray for us. God Bless Carmelites all over the world.

I've never bothered to try and figure out just why the French (as a whole) from "way back" seem to be so anti-clerical.

I'd love to hear your theories. I don't think it's all the revolution, by any means, [given *other* countries have had revolutions too] but this anti-clericalism in France, in particular seems especially nasty.

I'd love to hear your take on why that it so (or anyone else's for that matter.)

In the early 90s I stayed with family very near Compiegne when I first learned of those particular martyrs. Do you know a little more about exactly how the parish came to have this relic?

"There" is an apple on that tree.

"They're" going to eat all the apples on that tree.

"Their" apples are all going to get eaten.

Gem. Why are the French so anti-clerical? There was certainly a lot of anti-clerical feeling well before the revolution, and it is interesting that the only area which rose in defense of priests during the course of the Revolution was La Vendee.

Might I suggest that the influence of the writers of the Encyclopedia and especially Voltaire had much to do with it? He believed in God but satirised strongly the existing church.

Another factor also was the wordliness and corruption of the higher clergy who lived lives indistinguishable from those of nobles of the ancien regime. They were an easy target for critics.