Through Williamson to Ecumenism 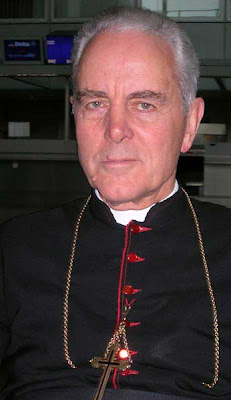 I thought that Bishop Williamson had been silenced but apparently not, there is a video interview with him here, (h/t Fr Z) it is rather long. I must confess I haven't had the patience to listen to more than half of it. As the work of the Holy Father for the reconcilliation of the SSPX progresses to a new stage with the incorporation of Ecclesia Dei into the Congregation for the Doctrine of the Faith, it is interesting to see the mindset of this particular dissident Bishop. From what he has to say, not just about his own opinions but those of fellow SSPX bishops shows the mountain that needs to be overcome. Williamson of course was never part of the mainstream Church for more than a few months, having been received into the Church after a short period of instruction, he went to join Brompton Oratory but was soon asked to leave, more or less immediately he went off to the SSPX at Econe and was ordained priest and then bishop.
Williamson is typical of many of the followers of Lefebrve who not only are suspicious of everything that the Church has to say or done since Vatican II but actually are incapable of "thinking with the Church", many of the young followers, including the priests have never been in "full" communion with Peter.
Some of you might wonder why the reconcilliation of the SSPX is important, some of my brother priests think me a little suspect for showing too much interest in it. The reconcilliation of this group of four Bishops and 500 priests is a crucial part of Benedict's vision of the Church. It is certainly about their reconcilliation and the reconcilliation of the Church of today with that of the past, overcoming the hermeneutic of rupture, it is also about clarifying the teaching of Vatican II.

This however I think is just an experiment, and a paradigm for other reconcilliations, there are still the talks about trying to find a home for "traditional" Anglicans going on quietly but the real object is reconcilliation with Orthodoxy. The questions regarding the teachings of Vatican II with the SSPX are smallfry compared with what will be necessary for negotiations with the East, in which it will be necessary to look at not just that council but Vatican I and Trent too. Here the prejudices and a negativity of Williamson will appear to be wet liberalism compared to our seperated brothers of the Byzantine world.
Benedict's agenda was laid out in his sermons in the first few days of his Pontificate, at the top of the list was the gathering into one flock the scattered sheep of Christ, his is a true catholic ecumenism, one which addresses differences and is capable of seeing beyond them to a common understanding which does not deny revealed Truth but affirms it. What happens here will be watched closely by the Eastern Churches and should be closely monitored by all who have an interest ecumenism.
Negotiations with the SSPX will alter the thinking of the CDF and the Church as a whole for the far more exacting task of making the See of Rome the true locus of unity and restoring the Dominically instituted office of Peter to the whole Church.
at July 11, 2009

I think you are right here, Father. However, I also think that should the SSPX be reconciled to Rome, a fraction of the SSPX, probably led by +Williamson, will veer off into outright sede vacantism.

I think a similar dynamic will play out in terms of the TAC and Byzantine Orthodoxy, if and when it comes to full reconciliation with Rome. Attitudes within Byzantine Orthodoxy range from seeing Rome as a "sister Church" to regarding the Pope as "antichrist" and there is a similar range of views within the TAC, although not as extreme, I don't think, in the anti-Rome direction.

I think you're quite right, father. I was going to do a post of my own saying pretty much this - no need now!!

I think prayers will resolve a great many of ills - but perhaps (probably?) not in our own time.

What happens here will be watched closely by the Eastern Churches...

I'm sorry to disappoint you Father, but apart from the handful of hierarchs whose unenviable extra-mural duties include making such things their business, relations between Rome and the SSPX, or Rome and the Particular Baptists, doesn't register on the radar.

"What happens here will be watched closely by the Eastern Churches..."

I think that there is a great deal of interest in how old Rome deals with plurallity at moment.

Moretben, not all Orthodox are closed to coming closer to Rome but we are suspicious of being swallowed up her.
From the point of view of doctrine it will be interesting to see how she will backtrack from what she has been teaching for the last 40 years, if she can do that elegantly, then we will see...

Ben,
I hope forgive me but I am sure you will understand my taking offence at your last and not publishing it.

If you'll permit me to rephrase: Orthodox theology and ecclesiology sees no significant distinction between SSPX-line "Traditionalism" and the attenuations of the "post-conciliar" mainstream. Benedict XVI, for whom I have nothing but admiration, is possibly the most "Orthodox" Pope of modern times, insofar as he is deep in the Greek Fathers and frequently cites them so as to let them speak for themselves; but Pastor Aeternus remains an immoveable obstacle (among several others), which no amount of "elegance" or regard for "plurality" can circumvent.

The reconciliation of the SSPX is critical for the Unity of the Church (doctrinally as well as liturgically). I know of many Orthodox who looks down their noses (quite rightly, I think) at our liturgical crisis; and so in this dimension, the reconciliation has important consequences. Another thing is numbers - that may or may not sound mercenary, but the SSPX are very popular, especially in France. Their reconciliation will undoubtedly strengthen the Church.

While "looking down one's nose" is perhaps not the most attractive or constructive of attitudes, I would say that Orthodox who are aware of such things as the Roman Catholic Church's "liturgical crisis" would tend to recognise it as an outcome of serious, deep-rooted issues in theology and ecclesiology, long pre-dating Vatican II.

He did talk allot about the relationship between the SSPX and the SSPV, which was interesting.

"...I would say that Orthodox who are aware of such things as the Roman Catholic Church's "liturgical crisis" would tend to recognise it as an outcome of serious, deep-rooted issues in theology and ecclesiology, long pre-dating Vatican II."

Quite so. The huge problem is that a whole mentality has been deliberately cultivated which blames Vatican II for the malaise.

I am afraid I cannot be optimistic about the future. I had better brush up on my Slavonic I think...

The Orthodox probably make regarding Vatican I many similar points which extreme members of the SSPX make about Vatican II. They may argue that many of the bishops present were paid for by the Pope, that many of those present left early rather than vote, that it was not unanimous, that it never actually ended as it was prorogued, that its results were never formally promulgated. They might note that Newman was doubtful about it at first but judged its general acceptance to be the work of the Holy Spirit, and that the Almighty had over-ruled the extremists who dominated the media.

In discussions with the East, as Fr Blake rightly observes ,Trent also will need to be examined. Please correct me if I am wrong but both these Councils seem to be much quoted but little studied.

Your post is very interesting, and the 'defects' you outline might certainly be useful - to Roman Catholics seeking a legal "get out"! From the point of view of Orthodoxy, they're quite irrelevant.

Father, who are you kidding?

He doesn't strike me as a great intellectual despite his Cambridge background.

What is he is good on is his own liberal, protestant, pre-60's background and education.

Sadie -Who says that a Cambridge background means that someone is a great intellectual? Williamson has a first degree in English Literature, he did not go beyond that. One might for example listen to him with some respect on say Shakespeare or Dickens - except that he might not be altogether objective when talking of Shylock or Fagin.

There are however several noted Catholic intellectuals from Cambridge, all of whom did PhD's there, Scarisbrick, Duffy, Norman, and Gilley come to mind.

he might not be altogether objective when talking of Shylock or Fagin.