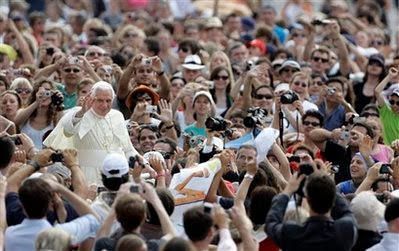 Here are some excerpts from CARITAS IN VERITATE published earlier today.

"Profit is useful if it serves as a means towards an end that provides a sense both of how to produce it and how to make good use of it. Once profit becomes the exclusive goal, if it is produced by improper means and without the common good as its ultimate end, it risks destroying wealth and creating poverty."

Some non-governmental Organizations work actively to spread abortion, at times promoting the practice of sterilization in poor countries, in some cases not even informing the women concerned. Moreover, there is reason to suspect that development aid is sometimes linked to specific health-care policies which de facto involve the imposition of strong birth control measures. Further grounds for concern are laws permitting euthanasia as well as pressure from lobby groups, nationally and internationally, in favour of its juridical recognition.

Populous nations have been able to emerge from poverty thanks not least to the size of their population and the talents of their people.

The acceptance of life strengthens moral fibre and makes people capable of mutual help. By cultivating openness to life, wealthy peoples can better understand the needs of poor ones, they can avoid employing huge economic and intellectual resources to satisfy the selfish desires of their own citizens, and instead, they can promote virtuous action within the perspective of production that is morally sound and marked by solidarity, respecting the fundamental right to life of every people and every individual.

"The current crisis obliges us to re-plan our journey, to set ourselves new rules and to discover new forms of commitment, to build on positive experiences and to reject negative ones. The crisis thus becomes an opportunity for discernment, in which to shape a new vision for the future."

"Today, as we take to heart the lessons of the current economic crisis, which sees the state's public authorities directly involved in correcting errors and malfunctions, it seems more realistic to re-evaluate their role and their powers, which need to be prudently reviewed and remodelled so as to enable them, perhaps through new forms of engagement, to address the challenges of today's world. Once the role of public authorities has been more clearly defined, one could foresee an increase in the new forms of political participation, nationally and internationally."

"In the list of areas where the pernicious effects of sin are evident, the economy has been included for some time now. We have a clear proof of this at the present time. The conviction that man is self-sufficient and can successfully eliminate the evil present in history by his own action alone has led him to confuse happiness and salvation with immanent forms of material prosperity and social action. Then, the conviction that the economy must be autonomous, that it must be shielded from "influences" of a moral character, has led man to abuse the economic process in a thoroughly destructive way. In the long term, these convictions have led to economic, social and political systems that trample upon personal and social freedom, and are therefore unable to deliver the justice that they promise."

"Today's international economic scene, marked by grave deviations and failures, requires a profoundly new way of understanding business enterprise. Old models are disappearing, but promising new ones are taking shape on the horizon. Without doubt, one of the greatest risks for businesses is that they are almost exclusively answerable to their investors, thereby limiting their social value."

"Financiers must rediscover the genuinely ethical foundation of their activity, so as not to abuse the sophisticated instruments which can serve to betray the interests of savers. Right intention, transparency, and the search for positive results are mutually compatible and must never be detached from one another."

"To manage the global economy; to revive economies hit by the crisis; to avoid any deterioration of the present crisis and the greater imbalances that would result; to bring about integral and timely disarmament, food security and peace; to guarantee the protection of the environment and to regulate migration: for all this, there is urgent need of a true world political authority, as my predecessor Blessed John XXIII indicated some years ago.

Such an authority would need to be regulated by law, to observe consistently the principles of subsidiarity and solidarity, to seek to establish the common good, and to make a commitment to securing authentic integral human development inspired by the values of charity in truth.

Furthermore, such an authority would need to be universally recognized and to be vested with the effective power to ensure security for all, regard for justice, and respect for rights.

Obviously it would have to have the authority to ensure compliance with its decisions from all parties, and also with the coordinated measures adopted in various international forums. Without this, despite the great progress accomplished in various sectors, international law would risk being conditioned by the balance of power among the strongest nations."

I wish the pope would remember if people didn't make a profit, then they wouldn't have jobs. If they don't have jobs, then they can't pay for anything else.

It's not rocket science, is it?