Newman: when and where? 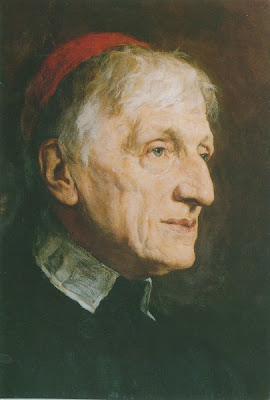 ICN The beatification ceremony of the Venerable John Henry Cardinal Newman (1801-1890) will be held in the Archdiocese of Birmingham during 2010, on a date and at a venue yet to be decided.

There has been much speculation in the Catholic Press, on websites and on blogs about the date and venue of the ceremony since Pope Benedict XVI authorised the proclamation of a Decree on Friday 3 July, that recognised the authenticity of a miracle obtained through the intercession of Cardinal Newman.

The miraculous healing took place on 15 August 2001, the Feast of the Assumption, when a permanent Deacon of the Archdiocese of Boston, USA, named Jack Sullivan, now aged 70, was cured of a crippling disease of the spine.

The anonymous source added: "Cardinal Newman will be beatified in the Birmingham Oratory".

Bishop William Kenney, CP, Diocesan Administrator in the Archdiocese of Birmingham, said: "We will suggest dates for the beatification ceremony of Cardinal Newman to officials in Rome. No official announcement will be made until a date and venue has been approved by the Holy See."

Bishop Kenney, added: "The long Roman summer holidays have now begun and an official announcement is unlikely before late September or early October 2009 at the earliest."

Archbishop Vincent Nichols, Archbishop of Westminster and President of the Catholic Bishops' Conference of England and Wales, Bishop William Kenney, and Fr Paul Chavasse, Actor of the Newman Cause and Provost of the Birmingham Oratory, met on Tuesday 21 July at Archbishop's House, Westminster, and are in favour of the beatification ceremony being on a Sunday during late May or early June 2010, in the Archdiocese of Birmingham.

The norm for beatifications during the Pontificate of Pope Benedict XVI is that they should take place in the diocese where the Servant of God lived and died - Cardinal Newman died in his room at the Oratory House in Birmingham on Monday 11 August 1890. There have been a few exceptions when, for good reason, the beatification ceremony was held in Rome.

The Cardinal Newman Memorial Church in Edgbaston, situated next to the Oratory House, opened by Fr Newman in February 1852, is not sufficiently large to host the beatification ceremony that will attract people from across the world.

Pope Benedict XVI has not officiated at a beatification ceremony and it has emerged from Rome that he will not make an exception for Newman, whom he first studied as a young seminarian in January 1946. That honour is likely to fall to the Prefect of the Congregation for the Causes of Saints, Archbishop Angelo Amato.

Check out the official site: The Cause for the Canonisation of John Henry Cardinal Newman
at July 26, 2009

Mr Peter Jennings of no representative responsibility for the press release to do with Newman has aquired this information ...

Jackie isn't PJ the press officer for the diocese of Birmingham, therefore speaking on behalf of Bishop Kenny, the Apostolic Administrator?

Sent you an e-mail...for clarification.