Pope Benedict XVI has suffered a small fracture to his wrist after falling while on holiday in northern Italy, the Vatican and hospital officials say.

The Pope, 82, went for a check-up at a hospital in the alpine town of Aosta.
read more 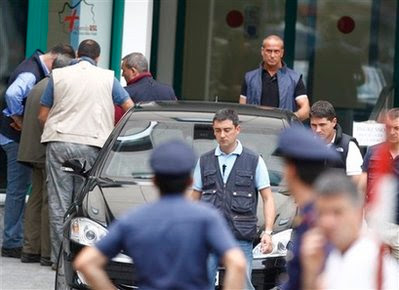 Italian Police officers, foreground, patrol outside the Regional Hospital in Aosta, Italy, Friday, July 17 2009, where Pope Benedict XVI was hospitalized after he broke his right wrist in a fall during his vacation in the Italian Alps. The Pope, 82, fell in his room in a chalet overnight and despite the accident, celebrated Mass and had breakfast before going to the hospital, a Vatican statement said.
at July 17, 2009

I hope that he'll be all right. Bones can take a long time to heal at that age.