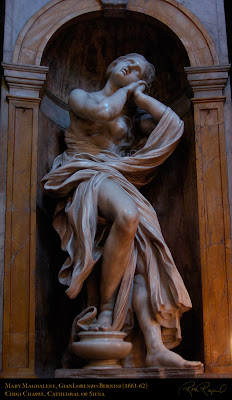 Elizabeth Lev has an interesting piece on portrayals of St Mary Magdalen,
here she is on Bernini's carving:

In 1661, the greatest of the Baroque artists, GianLorenzo Bernini, turned his considerable talents to the subject of Mary Magdalene. His was a papal commission, a gift of Pope Alexander VII for the cathedral of his hometown of Siena. Bernini, 63 years old at the time, was personally absorbed with the idea of repentance. He attended Mass daily and practiced the spiritual exercises of St. Ignatius. With this kind of spiritual preparation, Bernini was more than up to this task.

His Mary Magdalene has little of the earthy solidity of either Caravaggio or Guido Reni. In the hands of this master sculptor, Mary has become an elongated figure. Stripped of ornament and costly fabrics, her body twists and turns, drawing the eye upward like the serpentine flames of a votive candle. She stands upon her jar of ointment, but her face turns toward the heavens, and her hands are fervently clasped in prayer. Her deeply pleated robe falls from her like a discarded shroud, as her highly polished body seems to blend into the light pouring in from the overhead windows. Bernini's Magdalene has reached the end of her earthy struggles and becomes a beacon to Paradise for the rest of us.

This saint, so approachable in her passionate impetuousness, was held up for particular devotion by the Church in the 17th century. Adapting to many forms and personalities, she managed to make sacrifice and repentance chic, a miracle in and of itself.