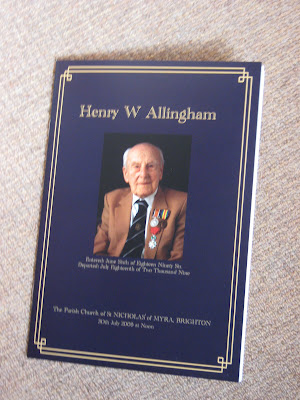 The funeral of Henry Allingham is taking place at the pre-Rormation Church of St Nicholas at the end of the road here, a few hundred yards away. The world's media are there. I was given a service booklet by a young woman.
Amusingly on the front rather "born" and "died" it has "entered" and "departed". The Duchess of Gloucester, as patron of WWI Veterans Association will be there, I hope Henry and Harry Patch who also died in the past week enjoyed having a Duchess looking after just the two of them!
It is a nice C of E funeral service, nothing too extraordinary. Henry's body is going be cremated afterwards.
On the back page are Henry's own words:

With me I carried a Bible given to me by Dorothy; it was a translation of the Old and New Testaments. On the flyleaf she wrote: "May the Lord watch between thee and me while we are absent from one another".

.....
People ask me how I've done it [lived so long] and I just say that I look forward to another tomorrow.

Of your charity pray for his soul, and those of all who have died in war. 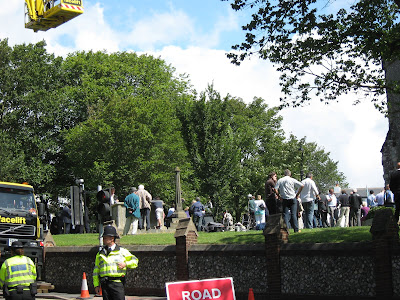 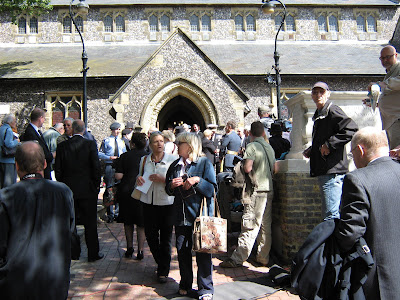 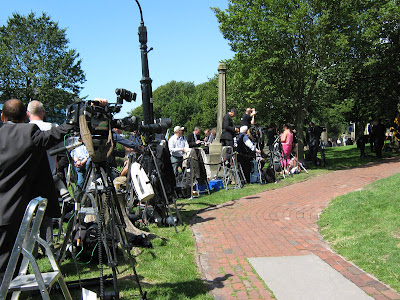 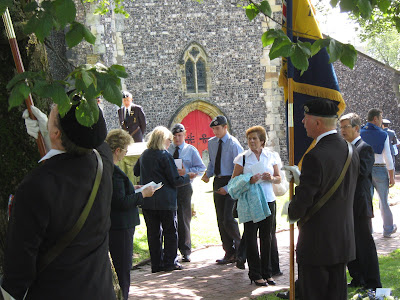 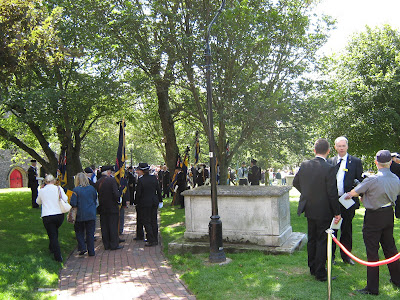 Also there were Jane and Clare, some Catholic ladies who obviously like dressing as chaps! What would the monks of Solesmes say Clare? Oh well it is Brighton! 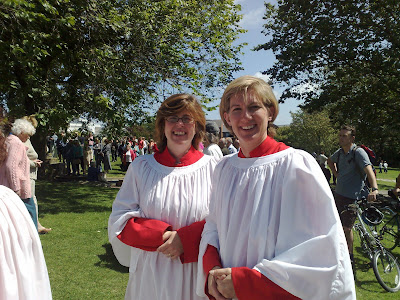 Wow. But then, I suppose it's the end of the line for WWI vets - the last one to experience trench warfare, at any rate. Imagine. Winning the "tontine" for an entire generation of millions.


In Flanders fields the poppies blow
Between the crosses row on row,
That mark our place; and in the sky
The larks, still bravely singing, fly
Scarce heard amid the guns below.


We are the Dead. Short days ago
We lived, felt dawn, saw sunset glow,
Loved and were loved, and now we lie
In Flanders fields.

About 3 years ago I had a day trip to Ypres (courtesy of Brighton Buses)with a couple of friends. So difficult to imagine now what it must have beeb like there 90 years ago. When we were waiting for the daily Last Post ceremony at the Menin Gate there were literally hundreds of British teenagers standing there - probably years 10 and 11 at school - wearing baseball caps and making a lot of noise. One of my friends (a retired primary school headmaster from Bethnal Green) muttered to me that he hoped they would take their baseball caps off. I replied that if it had all been explained prroperly to them they would and, if it hadn't been properly explained it wouldn't be their fault. A few minutes before the ceremony was due to begin at 8 pm - without anything being said to them - all the baseball caps came off and there was complete and utter silence. Perhaps they realised that most of the names on that massive structure were of ordinary young people hardly older than themselves. This was one of the great moving experiences of my life and I thought of little else for days after.

I know two Anglican priests who in the last two or three years have visited Auchwitz and neither was able to sleep for days afterwards.


It is so important that what happened in both World Wars is taught and explained to young people and that they are taken to Ypres, the Somme and those terrible Nazi concentration camps. From what I have seen, those who do go come back changed people, much more humble, grateful and caring towards others.

So far as Messrs. Allingham and Patch are concerned, may they truly rest in peace ans rise in glory. Requiescant in Pace. Amen.

Malcolm Kemp is of course right in saying that young people must be taught about what happened both on the Somme and in the Nazi extermination camps.

Some years ago I took one of my sons on a visit to the battlefields around Arras. We visited not only British cemeteries, but also some French and one German cemetery. The latter visit was particularly poignant - it had been where the Red Baron had first been buried - as two of the coach party declined to get out to see it and remained resolutely in their seats.

Visiting the Thiepval memorial was where my son really started to understand what had happened on
the Somme. We were told that whatever your surname you are bound to find at least one soldier bearing the same name on this gigantic monument. All the names belong to those who have no known grave. And yes he soon found our own surname engraved there.

His interest remained and last year he saw the last three remaining veterans present at the Armistice celebrations in London. He had hoped to join me today at Henry Allingham's funeral but was not able to get the day off work.
The young have not forgotten the sacrifice made by the soldiers and it was good to see several young children there this morning. One family had brought a large Union Flag which they had spread out on the grass and the children sat there round it quietly watching the large screen. They were living a history lesson which no doubt they will remember for many years to come.

No Father, it's the MEN who have enjoyed dressing as ladies all these years....

Pelerin, I would have cringed to see the flag spread out on the ground like that. I know that the British seem to have different ways of handling their flags, but such a thing in the US might well have started a fist fight, or sharp words. Unless the entire group was made up of creepy hippy jerks.

GOTO,
I don't understand what you are saying Jane and Clare are NOT men, neither have they been dressing as such.

GOTO, flag on the ground, only when saluting the Sovereign or a Regimental flag a fallen soldier.

The "Laurel & Hardy" traffic system of Brighton must have given the cortege a headache.For us mere mortals St Nicholas Church appears to be "out of bounds"

Ha-ha, Fr. Blake...you must be off your Wheatabix this morning. I was implying that Clare and Jane ARE dressing like women, it's clerical men, under the influence of frou-frou Italians who have been copying the ladies! [C'mon, you guys have been wearing kilts in Scotland for years; ditto those Samoan men in sarongs -- it wasn't just Dorothy Lamour who was in swanning around in those.]

Actually, those RED cassocks look pretty good on them! Given the surplice were they singing in the choir?

As regards the flag...*sigh* it shouldn't be bowed on the ground for ANYTHING. Here the flag code is strict. the only time anything above the US flag is sanctioned, is aboard a US Naval vessel a "church pennant" may be flow when services are to be done. Some dumb wad once was considering dipping the US flag at a Olympics entering ceremony, and I believe the rest of the team told him if he would they'd kick his butt. (And rightly so!)

goto
The flag signifies the monarch which we still have you don't, we won't dip our Queen, but a bit of cloth... well if it is all you have...

It may be something to with Churchill's 2 people divided by a common language,but I personally think Jo Stalin ,despicable ,evil man that he was has done this country less harm than the so called special relationsip of Roosevelt, Eisenhowert, Kennedy,Clinton,Bush & Obama!

ffn: Don't worry about zero, I think he secretly despises the UK. As for Stain? My, my, you HAVE drunk the kool-aide, haven't you. When we kill 30 million of you, give me a call.

Ah...the flag is the monarch's? No wonder you don't mind putting it on the ground, depending on who the monarch is, I suppose. (I think the present one is a brick, but I have my doubts about her tree hugging heir. The fair haired grandson, so far seems to have the right stuff without being a bit of a flake.)

Here the flag stand for ALL of us. :-D You wouldn't put a flag on the floor any more than you'd put a picture of your mother on the ground and walk on it!

I would describe Clare as decently, and elegantly, dressed.

A proper surplice is so much more dignified than an ugly square necked 'cotta' particularly if the latter is defaced (IMHO) by lace.

Malcolm Kemp, I too found the Last Post ceremony at the Menen Gate very moving. I was there on 7 September 2001 and was deeply moved when I saw a very old man, possibly a veteran of the Great War lay a wreath, while standing very near me was a young mother with a baby hardly a week old.

A day or two before that, with the help of the Belgian-Filipino couple whose wedding I celebrated on 8 September, I located the grave of Corporal Larry Dowd, the brother of my maternal grandmother. He was from near Tara in County Meath. He died on the feast of the Transfiguration in 1917 near Ieper/Ypres.

In recent years it has become possible in the Irish Republic to recognise and honour the many Irishmen who fought and died in the Great War.

I've read quite a bit about Henry Allingham and Harry Patch in recent years and it is admirable how they shared the story of that lost generation with so many. In November 2004 Harry met Charles Keuntz who had fought on the German side in the war.

May they all rest in peace.

Fr Coyle mentions the meeting between Harry Patch and Charles Keuntz which was filmed for a BBC programme.

This strange history was due to the Keuntz family being Alsatians and Alsace went from being German to French and back again to German in the space of some seventy years.
The area then returned to being part of France which it had been before 1870 and although Alsatians bear German sounding surnames and many speak both languages, they are fiercely proud of being French.