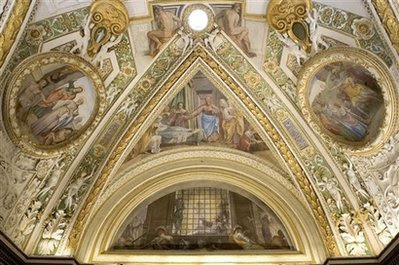 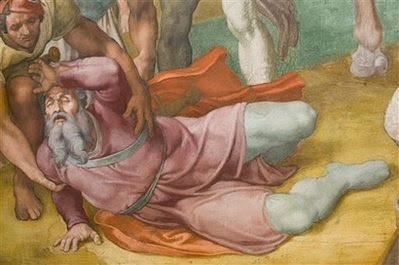 In these photographs made available by the Vatican newspaper L' Osservatore Romano a view of the ceiling of the Cappella Paolina is seen after restoration.
The Vatican says the restoration of a chapel that includes two Michelangelo frescoes has been completed. The Cappella Paolina, named after Paul III who commissioned it, in the Apostolic Palace is used by the pope and is not open to the general public. It contains Michelangelo frescoes depicting the Conversion of St. Paul and the Crucifixion of St. Peter. Officials said Tuesday that the five-year 3.2 million euro restoration was privately funded. Pope Benedict XVI will inaugurate the restored chapel with with Vespers on Saturday.
Reports say that the altar originally attached to the reredos has been made freestanding.
at July 01, 2009

I was quite happy at the news until the very last line. There always seems to be a sang with restorations.

I believe that the Altar was completely removed at the time of JP2 and has now been restored to the Chapel but now free standing, so they are repairing some of the damage done at a previous re-ordering. I gather the fitted carpet has also been removed and the marble floor exposed again.