SUMMARY OF ENCYCLICAL "CARITAS IN VERITATE" 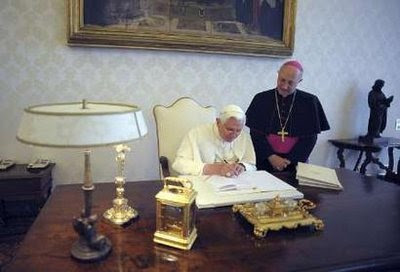 This is the Vatican Information Service summary of Caritas in Veritate

VATICAN CITY, 7 JUL 2009 (VIS) - Given below is a summary of Benedict XVI's new Encyclical "Caritas in veritate" (Charity in Truth) on integral human development in charity and truth.

The Encyclical published today - which comprehends an introduction, six chapters and a conclusion - is dated 29 June 2009, Solemnity of Sts. Peter and Paul, Apostles.

A summary of the Encyclical released by the Holy See Press Office explains that in his introduction the Pope recalls how "charity is at the heart of the Church's social doctrine". Yet, given the risk of its being "misinterpreted and detached from ethical living", he warns how "a Christianity of charity without truth would be more or less interchangeable with a pool of good sentiments, helpful for social cohesion, but of little relevance".

The Holy Father makes it clear that development has need of truth. In this context he dwells on two "criteria that govern moral action": justice and the common good. All Christians are called to charity, also by the "institutional path" which affects the life of the "polis", that is, of social coexistence.

The first chapter of the Encyclical focuses on the message of Paul VI's "Populorum Progressio" which "underlined the indispensable importance of the Gospel for building a society according to freedom and justice. ... The Christian faith does not rely on privilege or positions of power, ... but only on Christ". Paul VI "pointed out that the causes of underdevelopment are not primarily of the material order". They lie above all in the will, in the mind and, even more so, in "the lack of brotherhood among individuals and peoples".

"Human Development in Our Time" is the theme of the second chapter. If profit, the Pope writes, "becomes the exclusive goal, if it is produced by improper means and without the common good as its ultimate end, it risks destroying wealth and creating poverty". In this context he enumerates certain "malfunctions" of development: financial dealings that are "largely speculative", migratory flows "often provoked by some particular circumstance and then given insufficient attention", and "the unregulated exploitation of the earth's resources". In the face of these interconnected problems, the Pope calls for "a new humanistic synthesis", noting how "development today has many overlapping layers: ... The world's wealth is growing in absolute terms, but inequalities are on the increase", and new forms of poverty are coming into being.

At a cultural level, the Encyclical proceeds, the possibilities for interaction open new prospects for dialogue, but a twofold danger exists: a "cultural eclecticism" in which cultures are viewed as "substantially equivalent", and the opposing danger of "cultural levelling and indiscriminate acceptance of types of conduct and lifestyles". In this context Pope Benedict also mentions the scandal of hunger and express his hope for "equitable agrarian reform in developing countries".

The Pontiff also dwells on the question of respect for life, "which cannot in any way be detached from questions concerning the development of peoples", affirming that "when a society moves towards the denial or suppression of life, it ends up no longer finding the necessary motivation and energy to strive for man's true good".

Another question associated with development is that of the right to religious freedom. "Violence", writes the Pope, "puts the brakes on authentic development", and "this applies especially to terrorism motivated by fundamentalism".

Chapter three of the Encyclical - "Fraternity, Economic Development and Civil Society" - opens with a passage praising the "experience of gift", often insufficiently recognised "because of a purely consumerist and utilitarian view of life". Yet development, "if it is to be authentically human, needs to make room for the principle of gratuitousness". As for the logic of the market, it "needs to be directed towards the pursuit of the common good, for which the political community in particular must also take responsibility".

Referring to "Centesimus Annus", this Encyclical highlights the "need for a system with three subjects: the market, the State and civil society" and encourages a "civilising of the economy". It highlights the importance of "economic forms based on solidarity" and indicates how "both market and politics need individuals who are open to reciprocal gift".

The chapter closes with a fresh evaluation of the phenomenon of globalisation, which must not be seen just as a "socio-economic process". Globalisation needs "to promote a person-based and community-oriented cultural process of world-wide integration that is open to transcendence" and able to correct its own malfunctions.

The fourth chapter of the Encyclical focuses on the theme: "The Development of People. Rights and Duties. The Environment". Governments and international organisations, says the Pope, cannot "lose sight of the objectivity and 'inviolability' of rights". In this context he also dedicates attention to "the problems associated with population growth".

He reaffirms that sexuality "cannot be reduced merely to pleasure or entertainment". States, he says, "are called to enact policies promoting the centrality and the integrity of the family".

"The economy needs ethics in order to function correctly", the Holy Father goes on, and "not any ethics whatsoever, but an ethics which is people-centred". This centrality of the human person must also be the guiding principle in "development programmes" and in international co-operation. "International organisations", he suggests, "might question the actual effectiveness of their bureaucratic and administrative machinery, which is often excessively costly".

The Holy Father also turns his attention to the energy problem, noting how "the fact that some States, power groups and companies hoard non-renewable energy resources represents a grave obstacle to development in poor countries. ... Technologically advanced societies can and must lower their domestic energy consumption", he says, at the same time encouraging "research into alternative forms of energy".

"The Co-operation of the Human Family" is the title and focus of chapter five, in which Pope Benedict highlights how "the development of peoples depends, above all, on a recognition that the human race is a single family". Hence Christianity and other religions "can offer their contribution to development only if God has a place in the public realm".

The Pope also makes reference to the principle of subsidiarity, which assists the human person "via the autonomy of intermediate bodies". Subsidiarity, he explains, "is the most effective antidote against any form of all-encompassing welfare state" and is "particularly well-suited to managing globalisation and directing it towards authentic human development".

Benedict XVI calls upon rich States "to allocate larger portions of their gross domestic product to development aid", thus respecting their obligations. He also express a hope for wider access to education and, even more so, for "complete formation of the person", affirming that yielding to relativism makes everyone poorer. One example of this, he writes, is that of the perverse phenomenon of sexual tourism. "It is sad to note that this activity often takes place with the support of local governments", he says.

The Pope then goes on to consider the "epoch-making" question of migration. "Every migrant", he says, "is a human person who, as such, possesses fundamental, inalienable rights that must be respected by everyone and in every circumstance".

The Pontiff dedicates the final paragraph of this chapter to the "strongly felt need" for a reform of the United Nations and of "economic institutions and international finance. ... There is", he says, "urgent need of a true world political authority" with "effective power".

The sixth and final chapter is entitled "The Development of Peoples and Technology". In it the Holy Father warns against the "Promethean presumption" of humanity thinking "it can re-create itself through the 'wonders' of technology". Technology, he says, cannot have "absolute freedom".

"A particularly crucial battleground in today's cultural struggle between the supremacy of technology and human moral responsibility is the field of bioethics", says Benedict XVI, and he adds: "Reason without faith is doomed to flounder in an illusion of its own omnipotence". The social question has, he says, become an anthropological question. Research on embryos and cloning is "being promoted in today's highly disillusioned culture which believes it has mastered every mystery". The Pope likewise expresses his concern over a possible "systematic eugenic programming of births".

In the conclusion to his Encyclical Benedict XVI highlights how "development needs Christians with their arms raised towards God in prayer", just as it needs "love and forgiveness, self-denial, acceptance of others, justice and peace".
at July 07, 2009

My bedtime reading, breakfast reading, lunch and dinner reading for the next 24hrs.

Agreed Ma. I've just stopped after nearly 4 hours, and I'm still only half way through.

OK, that includes making notes and looking up references, but it's a massive document - in its scope and breadth of vision as well as sheer length.

I think he missed an upstairs bathroom sink....