Does wear, does care 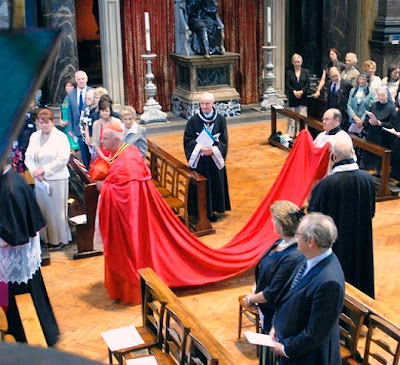 Andrew Cusack has this picture of Cardinal O'Brien at Brompton Oratory earlier this year, the Cardinal seems to wearing Cappa Magna quite often apparently but not this far south of the border.
A friend of mine who now teaches liturgy and dogma in a foreign seminary coined the phrase "won't wear, won't care" to so describe some of his less liturgically minded students. I think he also used to apply it to a few bishops and clergy.
at July 08, 2009

A 'new order' cappa magna is a sad sight compared with the glories of the old days.

He wore it in Derry, too, as I reported here.

Do keep up, Father

Sorry Paulinus, I knew I saw the report somewhere.

(I didn't want to spread scandal by people seeing His Emminence praying covered!)

I think that the Cappa Magna has had its day.Unlike dignified Mass vestments that enhance the Mass the Cappa makes most Bishops look like drag queens and can only invite ridicule from Catholics who may wish to experiance the EF of the Roman Rite.

Cappa has nothing to do with the EF.
It is just what Prelates wear.

I'm sure that I recall seeing a photo of Cardinal Hume wearing the Cappa Magna once in Westminster Cathedral, at a 'Chapter' event, I think. No idea where the photo could be found.

Cardinal Winning also wore it one at least one occasion. The one I have in mind is when he took up office. I saw that photo in one of the Scottish Catholic papers.