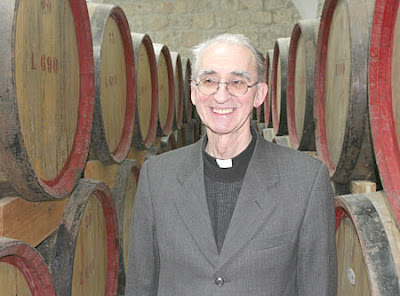 CMR For 125 years the Salesians of Don Bosco have been producing wine to support pastoral and educational work among the poor of Bethlehem. The proceeds from the Cremisan winery, located in a suburb of Bethlehem support the work of the order and upwards of 30 families according to the Independent Catholic News.

But for the past several weeks, Israeli soldiers at a checkpoint in Hebron refuse to let the wine through.


But for the last five weeks Israeli soldiers at the Hebron checkpoint have refused to let the wine pass. This means that not only Christian churches, but also pilgrim houses, hotels and restaurants in Jerusalem, Nazareth and other parts of Israel are being deprived of Cremisan wine this Christmas.

Because the wine is shipped from the Israeli port of Haifa, the sudden embargo has also made it impossible for the wine to be exported to Europe. The soldiers have told Cremisan that the wine constitutes "a security risk."
Most of the wine is communion wine primarily exported to the UK. But not this Christmas.

[Birmingham Post] She said: “What has happened is really very sad. It was all working like a dream. I have asked the (Israeli) Embassy if they can shed any light on what is going on. What this is doing is causing havoc and distress. It is sad this Christmas Christians are being denied the opportunity to be at one with the people of Bethlehem by drinking its wine.

“The wine has always flowed across the borders of mistrust in this troubled land. There are many of us hoping and praying church authorities as well as the British government will ask the Israeli authorities to end this unjustified embargo.”
I can't imagine why communion wine that has been exported for years would suddenly be considered a "security risk" but what do I know. You certainly can't be too safe these days. Perhaps, just to be certain that this wine poses no future risk, they should send some soldiers into Bethlehem to destroy any bottle of wine less than two years old. That ought to do the trick.
at December 04, 2008

For all the ecumenism of JP II, this is how the "state" of Isreal treats Christians alike. Yet they have the audacity to interfere in the affairs of the Pope and call for embargos on canonisations and changes to the liturgy.

Somebody put together a correctly worded petition letter on this blog and then distribute it right across the Catholic blogosphere and let all Catholic bloggers sign, in the name of inter-religious dialogue and good-will of course!

Let us pray for Our Blessed Lady's intercession that perhaps she might repeat those words spoken softly to her Son so long ago, 'They have no wine ........'

The Supermarkets are chock-a-block with goods from Israel,all grown on stolen land,it's just a matter of deciphering the labels.

"Perhaps, just to be certain that this wine poses no future risk, they should send some soldiers into Bethlehem to destroy any bottle of wine less than two years old."

Hmmm. "The Slaughter of the Vinocents"

I'd be curious to know if there was any specific threat.

It wasn't the Israelis that terrorized the Church of the Nativity, but Palestinian radicals.

The fact that Salesians are making communion wine in Palestine is something, I suspect, that neither Hamas nor Likud have at the top of their agendas, and Westerners' putting it at the top would be a disgraceful piece of neo-colonialism.

Dear Ttony it is a story that illustrates many other similar stories.

A bigot is one who in spite of the evidence persists in a particular view, only the ignorant use it as a term of general invective. The State of Israel has during its short history enjoyed good relations with the Popes, so it is difficult to talk of a "historically anti-catholic attitude". Indeed in May l955 the Israeli Philharmonic Orchestra flew to Rome to give a special performance in thanksgiving for Pius XII's help to the Jewish people. When John Paul II made his visit to the State of Israel the only dissenting voices came not from Jews but from Arabs.

As for "stolen land" the land in question was once Judea and Samaria, before the First World War it was Turkish, then it was a Mandated Area, then it was occupied by Jordan, then by Israel.
The question of who can settle where will depend on a settlement and the erection of a new State, Palestine. In the meantime legally the Jews have the right to settle anywhere in the Mandated area ( the 1967 lines are merely cease-fire lines)until such a settlement is reached. After that presumably they will be expelled (like the 80000 thousand Jews in Arab countries in 1948) unless like the Israelis the Palestinians have a state with both Jews and Arabs in it.

It would be good to know more about
the wine story,as so many lies are peddled about Jews and Israel, including an account of why the wine constitutes a security risk. As it is it is a gift to the anti-semitic
"catholics" who do not recognise the plain text of Vatican II.

Shall we begin with how Israel's Yad Vashem Holocaust museum still has the insulting panel referring to the saintly Pius XII as "unjust" who supposedly "to leave his palace, with crucifix high, to witness one day of pogrom".

Let us also not forget how various Jewish lobbies reacted to canonisation of Edith Stein.

And last but not least, let us not forget the Israeli slaughter of the civilians in the Lebanon in 1996, many of whom were Catholic.

Israel was founded on acts of terrorism, its leaders were (and are) former terrorists and it continues to carry out acts of terror on its Christian and Muslim neighbours.