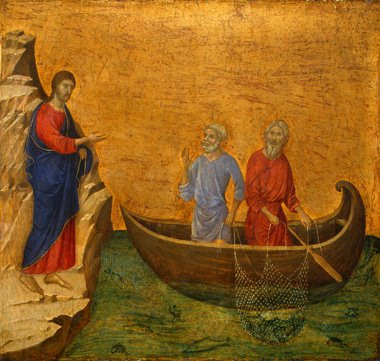 Yesterday, at the general audience the Holy Father seemed to sum his ecumenical approach, and the Vatican Councils in a few words, speaking of the miraculous draught of fishes, he said, "Do not allow your net to be torn, help us to be servants of unity". Again and again he stretches out the hand of friendship to Churches and Ecclesial Communities that have some sense of a Catholic identity. In the case of the SSPX for example it is a matter of bringing the whole shoal to shore, "good and bad alike".
Creative Minority has another account of a Papal netcast:

Congregation for the Doctrine of the Faith has decided to recommend the Traditional Anglican Communion be accorded a personal prelature akin to Opus Dei, if talks between the TAC and the Vatican aimed at unity succeed, it is understood.

The TAC is a growing global community of approximately 400,000 members that took the historic step in 2007 of seeking full corporate and sacramental communion with the Catholic Church – a move that, if fulfilled, will be the biggest development in Catholic-Anglican relations since the English Reformation under King Henry VIII.
TAC members split from the Canterbury-based Anglican Communion headed by Archbishop Rowan Williams over issues such as its ordination of women priests and episcopal consecrations of women and practising homosexuals.

The TAC’s case appeared to take a significant step forwards in October 2008 when it is understood that the CDF decided not to recommend the creation of a distinct Anglican rite within the Roman Catholic Church – as is the case with the Eastern Catholic Churches - but a personal prelature, a semi-autonomous group with its own clergy and laity.

Opus Dei was the first organisation in the Catholic Church to be recognised as a personal prelature, a new juridical form in the life of the Church. A personal prelature is something like a global diocese without boundaries, headed by its own bishop and with its own membership and clergy.

Because no such juridical form of life in the Church had existed before, the development and recognition of a personal prelature took Opus Dei and Church officials decades to achieve.

An announcement could be made soon after Easter this year. It is understood that Pope Benedict XVI, who has taken a personal interest in the matter, has linked the issue to the year of St Paul, the greatest missionary in the history of the Church.
The Basilica of St Paul outside the Walls could feature prominently in such an announcement for its traditional and historical links to Anglicanism. Prior to the English Reformation it was the official Church of the Knights of the Garter.

The TAC’s Primate, Adelaide-based Archbishop John Hepworth, told The Record he has also informed the Holy See he wants to bring all the TAC’s bishops to Rome for the beatification of Cardinal Henry Newman, also an Anglican convert to the Catholic Church, as a celebration of Anglican-Catholic unity.

The Pope's ecumenical strategy, most especially for those who have been at the cutting edge of ecumenical dialogue over the last forty years, seems strange, almost incomprehensible. It is liberal, in the sense of being generous. It is based on a clear statement of Catholic doctrine, it is almost triumphalistic in that sense. It is almost the antithesis of what has been understood in ecumenism.
His ecumenism is very much "you-come-in-ism", a clear welcome into the Catholic Church, with flexible structures then established to ensure both communion with the Church but also a continuation of individual customs, modes of worship. I suspect the unity offered to various traditional groups, and possibly to TAC, is a sign to the Orthodox world of the possibility of unity and pluralism.
AFTER THOUGHT
Having spoken to one of my parishioners: an Anglican clergyman friend says, there 250 English Anglican clergy who want to become Catholics, they have been told by the Bishop of Ebbsfleet to do nothing until Rome speaks later this year. Mmmmm!
I think one of the reasons for delay with the apointment of a new Archbishop of Westminster is finding someone who will be open to new "Benedictine" (or a proper VII) understanding of ecumenism.
at January 29, 2009

Thank you for this helpful assessment.

Would it be too much to say, that this is 'the conversion of the heart' which he pleaded for at last week's General Audience during the Week of Prayer?

One former Anglican clergyman was received into the Church recently at the Yorkshire parish that I attend. Does anyone know of any others?

The Holy Father is putting into practice what he said when elected – that his mission is to unify. But unlike JPII - who also wanted to unify - Pope Benedict will have nothing to do with wishy-washy ecumenism or ill-advised and controversial gestures (Assisi, for example…). He starts from the Truth – which is one and cannot be subdivided or watered down.

All must seek the Truth and acknowledge it when found. That acknowledgment entails action and responsibility, hard choices and conversion, putting behind the past and setting forth in hope and love. It embodies Our Lord’s invitation to “Leave all things and follow Me”.

As in Our Lord’s time, not everyone who hears the call will heed it. The Holy Father’s response to this is not to ‘change’ the call, but to continue to make it in charity and humility. He will not compromise the Truth for some temporary gain or artificial unity. He recognizes that some religions are closer to the Truth than others, some are ‘on the way’, while others have ‘lost their way’. But the call goes out to all, not in a triumphalist spirit, but rather like St. Andrew saying: “We have found the Lord. Come and see where He dwells.”

I hope Father Ray will indulge me for making a completely off-topic comment.

I'm delighted to announce that Cardinal Cormac's former director of public affairs, Austen Ivereigh has won his libel case against the Daily Mail.

Some of the worst accusations which can be made about a Pro Lifer (and I happen to know that Ivereigh is one of the most committed Pro Lifers out there) and of the utmost seriousness for Roman Catholics were levelled at him. They were spiteful, deeply hurtful for him and all completely untrue.

Today (or rather yesterday) Ivereigh emerged from court with his name cleared and his repuation restored.

Yet though countless people, including many practising Catholics will have read the libellous story in the Daily Mail, the fact that a jury found the story to have been a defamatory tissue of lies will receive vastly less coverage.

Ivereigh has had to live with this case sullying his good name for the last two and a half years. He isn't the only one to have suffered through it. His mother had to sit through barristers mauling her son's private life in court, which she must have found excrutiating.

If Father Ray and any other blogger reading this could blog on Ivereigh's libel victory, it won't just be me who is grateful but every other person who's been unfairly trashed by a national newspaper but either not had the means to fight it in court, or have done and won only to find that the restoration of their reputation was buried in a single column on the inside pages if it was reported at all.

The blogosphere can help to tip the scales of justice in favour of the ordinary person against the mammoth weight of mega media corporations.

Thanks for your thought-provoking take on this, (as ever), Father. If it comes off, then with the rehabilitation of the SSPX there will effectively be a pincer movement against the abusers of the liturgy and the Faith.
Re your insightful afterthought, I wonder whether there might be an announcement about Westminster to coincide with Candlemas.

It's on the internet.
So it must be true.
Pass it on.
http://www.liturgy.co.nz/blog/anglican-personal-prelature/467