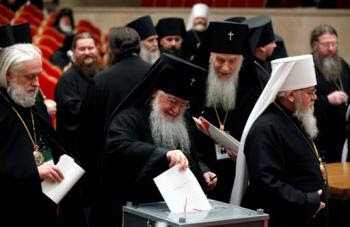 (AP) — Hundreds of Russian Orthodox Church electors convened Tuesday in Moscow for the first election of a patriarch since the fall of the officially atheist Soviet Union.

The 711 electors, which include prominent businessmen and political figures as well as monks and priests, have until Thursday to pick a successor to Alexy II, who died Dec. 5 at age 79. Alexy II had served since 1990 as spiritual leader of the world's largest and richest Orthodox patriarchate.

The new patriarch will be crowned next Sunday in Moscow's Christ the Savior Cathedral and will wield enormous spiritual power. But he will also preside over the patriarchate's vast business empire, built with the aid of tax breaks and other government concessions since the 1991 fall of the Soviet Union.

The church insists it is not appropriate to compare the selection process to a secular election because a new patriarch has already been chosen by God.

But in practice, the patriarch's electors will include some of Russia's politically connected elite: a tobacco-company owner, a governor's wife and the son of the president of Trans-Dniester, a Russia-dominated breakaway province of Moldova.

The presence of political figures among the electors only reinforces the impression that politics will play a major role in the naming of the new church leader.

Interim leader Metropolitan Kirill of Smolensk and Kaliningrad is the favored contender, but he faces at least two challengers and electors can also propose their own candidates.

Kirill, 62, received the most votes — 97 — in a secret ballot by church leaders Sunday. The two other candidates chosen by the Bishops Council were Metropolitan Kliment of Kaluga and Borovsk, who received 32 votes, and Metropolitan Filaret of Minsk and Slutsk, with 16.

Kirill is seen as more likely to assert independence from the Kremlin and to work for improved relations with the Vatican. He faces opposition from a strong fundamentalist movement within the church that sees him as too modern and too eager for a rapprochement with Roman Catholics.

The Kremlin is not openly backing any of the contenders. But President Dmitry Medvedev is said to be close to Metropolitan Kliment, 59, who is supported by church fundamentalists.

Filaret, 72, is the top cleric in Belarus and maintains good relations with Alexander Lukashenko, that country's authoritarian president.

Church and state are officially separate under Russia's post-Soviet constitution, but the Russian Orthodox Church has served the state for much of its 1,000-year history and ties have tightened since Vladimir Putin came to power in 2000.

Some nonreligious Russians complain that the church has tailored its doctrine to suit the current government, which has justified Russia's retreat from Western-style democracy by saying the country has a unique history and culture.

The Russian Orthodox Church counts its flock as more than 100 million in Russia, though polls show that only about 5 percent of Russians — mostly low-income rural dwellers and urban intellectuals — are observant believers.

Two-thirds of the electors are clerics, but the other third are laymen. Dioceses across the fomer Soviet Union sent businessmen, government officials and their relatives to vote for the new patriarch — an unprecedented move the church calls an "award" to supporters and sponsors.

The decision to open the voting to powerful lay people has drawn some sharp criticism. "This is a vanity fair," theologian Andrei Kurayev was quoted as saying in the daily Kommersant.

But church leadership has shrugged off the criticism. "What are we to do if these people are part of our society and our church?" Father Vsevolod Chaplin, a church spokesman, was quoted by the Interfax news agency as saying.
at January 27, 2009

Metropolitan Filaret has now pulled out of the running according to a live news report on Russia Today and has given his support to Metropolitan Kyril.

I think it is fairly certain that Metropolitan Kyril will now be elected.

This isn't exactly on topic, but this would be an interesting sociological/theological investigation:

"The Russian Orthodox Church counts its flock as more than 100 million in Russia, though polls show that only about 5 percent of Russians — mostly low-income rural dwellers and urban intellectuals — are observant believers."

Why aren't the middle/upper class observant?

I guess this is really a perennial quesiton!

I would suggest that the polls are out of date. The Russian Church has been through a 'second spring' under the late Patriarch HH Alexis II (Eternal Memory!)

As the Moscow Cathedrals now see government ministers and young professionals as regular worshippers the situation has changed significantly over the last fifteen years. There is a shortage of priests needed to administer to the growing number of the faithful.

From an historical perspective many of the upper class Russians fled into exile at the Revolution and started the spread of Russian Orthodoxy in Europe, particularly Paris, and the USA.

Many years to HH Patriarch Kyril!

Fellow Christians, pray for a patriarch that can lead the Russian Orthodox Church to an authentic spiritual revival. Let him further the gap between the old KGB controlled clergy and hierarchy and the truly pious ones. Let him convene a holy synod, filled with the presence of the Holy Spirit, that will elevate the Russian Orthodox Church to a truly Christ-centered Church, ready to be a leader in the ecumenical movement that will bring about real unity of Mother Church. Under the new patriarch, the ROC must rise above the theocracy of the czarist and communist regimes and be an instrument of Christ.

From what I've read, that was the typical profile of English Catholicism in its great growth phase in the first half of the 20th century.