It's Not My Mass 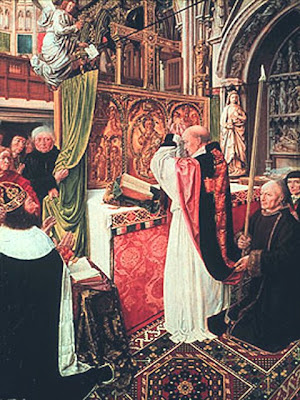 Once I have finished tonight I am going to sit down and try and learn the Epistle and Gospel tones for the Missa Cantata on the Feast of the Purification - though I am feeling so tired I might just fall asleep.
If the Mass was in the Ordinary Form, in our diverse and multi-cultural parish I could have chosen

the language
the orientation of the Mass -ad populum or ad apsidum
how to dress the altar: Bendictine arrangement or a couple of candles at one end
whether to substitute hymns for the entrance and communion antiphons
which hymns for these parts
whether to substitute hymns for the procession, indeed whether to have a procession what parts of the Mass to have the congregation to sing
what parts of the Mass I should sing: Collects Gospel, Preface, Eucharistic Prayer, Pater, Ita.
which Eucharistic Prayer
which acclamation after the consecration
whether to have the Sign of Peace
whether to have Holy Communion under both kinds or not
then of course there are decisions to be made about how to introduce bits and bobs, little bits of ad lib here and there

Then there is the major question of what kind of style to adopt, London Oratory or Charismatic Meeting, either are acceptable.
In a city with twelve different parishes, there will be twelve very different celebrations. What is so liberating about the Traditional Rite is that you decide whether you are able to celebrate a low Mass or something more solemn, open the Missal and get on with it. I am afraid we are going to substitute a psalm tone for the more complicated chants, we can't do that wonderful Alleluia, for example. I hope I am going to do the Gospel tone properly rather than recto tonally.
The other difference between the two forms is that in the Ordinary Form, the priest more or less can celebrate a solemn Mass on his own, he actually doesn't need anyone else on the sanctuary. I remember one Easter Day having no servers, they had overslept, the cantors were away, and we still had a sung Mass with incense, the thurible was on a stand and I led the singing. The Extraordinary Form demands the priest acts in consort, ideally with other Sacred Ministers, but with at least with servers and a choir, all of whom should know their particular role. In that sense it is much more in keeping with the ecclesiology of VII, which sees the Church as a Communion of the baptised each with a particular ministry.
Though I stand in the place of Christ, it is the Master of Ceremonies, who could be a twelve year old boy, who directs everything.
The style of the Mass is not according to my whim but according to carefully laid down rubrical instructions. What I find delightful is that it is not "my Mass" but the Church's Mass. I am not in control, it is the Missal. I am not the Master of the Liturgy, I am its servant
at January 21, 2009

Sleep well, You deserve it. Everything will be 'all right on the night' because you are concerned for the reasons you so eloquently and accurately describe.

The Woman of the House said...

Father, I had a guy come up to me the other day and go on and on about the fact that the ordinary form of the Mass is valid but not licit and that I really need to be getting to a Latin Mass instead. What is he talking about. He's offbase right. The ordinary form is licit and valid, no? Thanks
God bless.

They want to teach my boys to serve the old rite..I have a nearly 12 year old boy..MC..wow!!

Adele,
Yes, he is off base.
Both forms are the liturgy of the Church and both valid and licit.
I just think the OF needs an awful lot of personal input, so much depends on the priest and his choices, skill and style.
The EF doesn't, it needs a certain basic competence, on behalf of priest, ministers and choir, that is all.

It pleases me greatly to see Fr. Ray describe the old Mass as liberating.

That is precisely what it is !

The "old" Mass liberates the priest from being responsible for the style of the liturgy because it imposes on him a given liturgy whose rubrics are to be followed.

Admittedly, he might need to learn those rubrics, to familiarise himself with them, but this will happen in time, in God's good time.

This is why Fr. Z is so right to reiterate on his blog that Summorum Pontificum is a gift to priests. That's exactly what it is : a gift, not an additional burden, or an onus, neither does it take way anything from the bishops.

It should not be read solely as a legal document. I wish more priests (and bishops) would see this.

I echo Jane's comment. "It will be all right on the night" precisely because the priest is not the master of the liturgy. He (of course) does his best to "learn his lines", so to speak, and to follow it, but ultimately he is led by it.

It strikes me as a tremendous emancipation from all the choices he has to make in the novus ordo.

No, Father will do very well, and I hope he doesn't lose too much sleep over it.

Not to worry Father, you have it exactly right! The EF puts the emphasis where it should be - on Him, not on the celebrant.

Years ago you hardly noticed who the celebrant was - other than from the sermon ("It's Father Murphy and he gives long sermons..."). Of course, there was no sermon at weekday Masses.

But there was a comfort feeling in that no matter where the celebrant was from - Ireland, England, Africa, The Philippines - the Mass would always be the same. Well, the Germans had their own version of 'Church Latin' pronunciation, but that would only have been obvious to the trained ear.

My problem with the OF - and something the Holy Father has spoken against - is the celebrant as 'performer' and, consequently, the center of attention.

Some priests can carry this off - the introductory remarks, salient thoughts before the Readings, closing reflections, etc. But many are not so gifted. But even for those who are so gifted, Mass becomes a 'personality cult' for many Catholics: "I just love Fr. Joe's Masses..."

This distracts from the Mass itself and Who is really offering it. If people are only drawn to the Mass because of the celebrant, they are deluded and when "Fr. Joe" is re-assigned they may be in for disappointment.

"He must increase and I must decrease" should be the motto for all priests celebrating Holy Mass.

When it is my turn, wherever it is done, please make sure it is in the Extraordinary Form.

The Woman of the House said...

Thanks for the info about the licit and valid thing, Father. I have been praying that we would get some FSSP priests around here. It's such a spiritual desert here.

By the early 1960's for your celebration of the 'EF' you could have chosen:

whether to celebrate ad populum or ad apsidum;

whether to subsitute appropriate texts i.e. hymns (as indicated in the 1958 Instruction);

whether to have readings proclaimed by a reader in the vernacular;

whether or not to use incense in a sung Mass etc. etc.

Whilst appreciating the point you are making Fr. Ray about the loss of a consistent form of liturgical praxis I suggest you are rather oversimplifying things.

There are many priests (I would say most) who are poorly educated, sometimes inarticulate, devoid of personality, egomaniac and who would benefit from the EF where these defects are less significant. The EF protects priest and congregation from any given individual's limitations.

The OF is great if you are a Joseph Ratzinger but if you are not then stick to the EF is my advice. The OF is also acceptable when concelebrated by retired priests but beyond that it is just too challenging and complex for most modern clergy and congregations.

That's why I love the EF, you always know what you are getting, and it's such a relief to know exactly where you are, whoever is saying Mass.

Praying the preparations are going well :)

Adele - he was wrong in some respects. I don't know what he was getting at but I suspect he thinks that since Paul VI did not officially abrogate the old rite, whether he would posses such a power as to promulgate a new rite in its place?

Some liturgists have concluded that no pope can abrogate the old rite, as it is out of his power.

With regard to the tones for the Epistle and Gospel, I would humbly suggest using a monotone for the Epistle which is quite allowable except for any Questions in the text, while using the simple gospel tone first time out. Next time then, learn the more solemn tones, and try your hand at the beautiful more solemn Preface tone at the back of the Missal usually.