From the Pope's Tailor 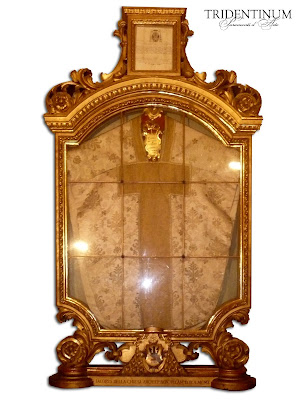 I had an e mail from the Holy Father's liturgical tailor the other day. I am sure my grandfather never paid "upfront", good tailors always expected their bills to be settled late. My mother sacked her dressmaker when she discovered they had made frock she had had made in a different size for one of her friends.

Tridentinum is planning a replica of the original chasuble of St. Charles Borromeo, donated by the Saint Archbishop of Milan to the Senate.of Bologna This relic, made white silk lampas brocaded in gold with gold orphreys, was donated by Cardinal Archbishop of Bologna Giacomo Della Chiesa - elected Pope with the name of Benedict XV - to the church of Santa Maria della Pietà de'Mendicanti. We want to make a copy of fabrics and gallons and realise ten numbered copies, the first of which will be donated to the Holy Father, the second to the Cardinal Archbishop of Bologna, the third to the church of Santa Maria della Pietà; the other seven may be booked right now by our customers at the price of 5,000 euros. Each copy of the St. Charles chasuble is accompanied by a certificate bearing the name of the buyer. The seven customers who buy a chasuble will also participate in the financing of chasubles donate to the Sovereign Pontiff and the Archbishop of Bologna, and will be mentioned at the time of delivery of the vestment. The chasuble will be ready within next Corpus Christi 2009.

Please reserve as soon as possible your chasuble, because no other copies will be made and it will become a unique and unrepeatable artwork. To buy just go to the vestment sheet

With a limited edition of only 10, it would be difficult to adopt as the new diocesan vestment. Any plans for a re-run, do you know?

"However it would be useful to have in the sacristy..."

Ordered a vestment, sent $5500 dollars, promised delivery in a month, nine months on I am still waiting.

I'm sure Fr. L is now really happy about his chasuble, as you may read in our feedback page. Please note that the new firm of the Company is ARS REGIA, and the new website is www.ars-regia.com

Moreover, there are two of these chasubles still waiting for a buyer... :)